Eddie Jones said his performance as head coach has not been good enough after defeat by France in Paris saw England come third in the Six Nations.

“That is not a question I need to answer. I just do my job. It’s a question for other people,” Jones said.

“I’m disappointed for the fans and for the players. I obviously haven’t done a good enough job, I accept that, but we’re moving in the right direction.

“The results aren’t good enough. When you rebuild a team it takes time.” 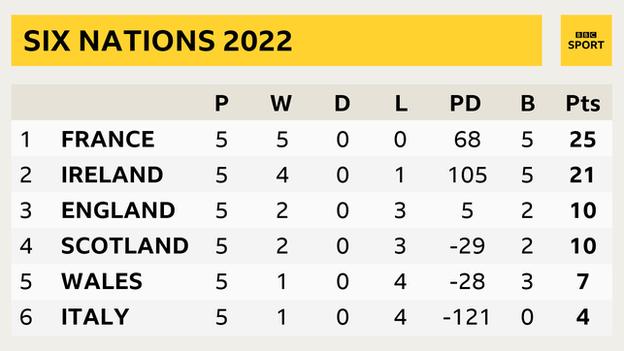 England trailed 18-6 at half-time on Saturday but fought back in the second half thanks to Freddie Steward’s try in the corner.

However, Antoine Dupont replied with a classy try to wrestle back control and although England showed some promising signs, they lacked the firepower to break down France’s well-drilled defence.

“France are deserved champions of the Six Nations, they are the best team,” Jones added. “But we had enough chances to win that game, we just didn’t put them away. We were not quite clinical enough.

“That has been a little bit of the story for us in the Six Nations. We have put ourselves in positions to win the three games we have lost but not been clinical enough, not been good enough, to win those games.

“That is disappointing but the spirit we showed is going to make sure this team keeps moving in the right direction. This is a great benchmark game for us.

“We have got a lot of good young players coming through and some of the older guys are starting to play some really good rugby again, so we are going to have a good blend going through to the World Cup [in 2023].”

England started the Six Nations with defeat in Scotland before beating Italy away and Wales at home.

Their title hopes were ended by a record 32-15 home defeat by Ireland – a match they played mainly with 14 men after lock Charlie Ewels was sent off after just 82 seconds.

England faced the possibility of a second successive fifth-place finish but defeats for Scotland and Wales ensured they remained in third.

“I think the way the team approached the tournament – we attacked it with great spirit and great endeavour,” Jones, speaking to BBC Sport, added on Sunday.

“We wanted to attack more aggressively and we did.

“What we weren’t able to do was to finish our opportunities and I said that will come through more time together as a team.

“I really like the way this rebuild is going. Obviously we’d like to have better results but sometimes it doesn’t go that way and you’ve got to be a little bit patient.

“I can see a group of young players coming through joining together with a group of experienced players we’ve got.

“And then I look at my sheet here – 11 players that we haven’t been able to use that are all highly qualified and senior international players – about five or six of them are Lions players.

“So to throw those players back into the mix combined with the squad we’ve had for the Six Nations is going to make it very competitive getting into that squad and increase the strength of the team.”

Jones had a message for fans who might be disappointed with England’s results this campaign.

“Generally most sports fans don’t have patience do they? They want results straight away so I can’t give them patience,” he said.

“All I can say is that we know what we’re doing, that we’re on the right track and the team will keep progressing.”