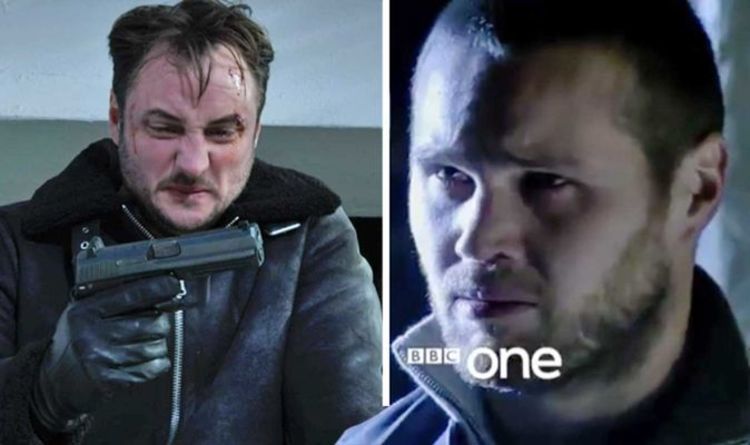 EastEnders regained their iconic status last night when they aired perhaps their best Christmas Day special episode in a few years. Millions tuned in to see Keanu Taylor (played by Danny Walters) killed as Martin Fowler (James Bye) carried out the Mitchell’s dirty work. However, after the BBC One soap dropped a trailer for what’s to come in the next few days in the run up to the New Year, it seems a huge twist is in store for fans. But what could it be?

There has already been speculation that Keanu is in fact alive and on the run, after Martin emerged worse for wear from the warehouse after seemingly shooting the oldest Taylor son.

While fans have to wait to find out exactly what fate Keanu was sealed, there were a few clues dropped in a sneak preview.

The video begins with Sharon Mitchell (Letitia Dean) standing in the Square and the notorious duff duff plays out as the following words flicker on screen: “Family means everything. Lies. Secrets. Giving Talking. Revenge. Everything.”

The clip then cuts to Martin giving Keanu a deathly stare and he shouts: “It’s over!” Before crossing to Louise Mitchell (Tilly Keeper) in the Queen Vic.

Linda Carter (Kellie Bright) then emerges from the van in which Keanu and Louise tried to escape Walford in – is there a link?

But then Martin is seen convincing Ben Mitchell (Max Bowden) is orders were fulfilled: “It’s done. Now you sort my problem,” he states.

As for where Phil Mitchell (Steve McFadden) has been all this time, he has stayed well and truly out of the revenge plan for once and instead is seen keeping a watchful eye on his daughter in the pub.

Sharon however is clearly regretting her affair with Keanu as she breaks down in tears, but the twists don’t stop there as Jean Slater (Gillian Wright) is given the scare of her life.

As for what fans think about the trailer, they took to social media to comment.

One replied: “So curious as to Linda’s part in all this. Maybe she’ll keep be one of the few that knows the secret that Martin let Keanu go and faked his death.”

“Prediction- Louise asked Martin not too kill Keanu  Martin and Keanu faked the video. Linda saw him, so he took her hostage,” someone else wrote.

A third added: “Only thing that really confuses me is why is Martin crying so much if he hasn’t killed keanu. Because now I’m 100% sure that he hasn’t killed him so what is the secret? And who has Martin actually killed? Who was the person they ran over? Pls be someone good and not a stranger.”

It comes as the Executive Producer Jon Sen spoke out about the upcoming flashback episode which is set to air on New Year’s Day.

He said: “We all agreed that Christmas is so good we wanted to do it twice! So this year the New Year’s Day episode will be a format-busting sixty minute episode taking us back to the beginning of Christmas Day to see the stories from different perspectives.

“As the episode unfolds, viewers will discover what really happened on that day, when new secrets were born and fresh alliances forged.

“I can’t wait to see how fans react,” he added.

Soap boss Kate Oates also revealed: “All serial dramas have played with format over recent years and it’s less of a surprise these days so to do it, there has to be a reason.

“There was so much story to get in there – there are lots of unanswered questions from Christmas Day and some of them, the audience won’t even have realised have been raised until they watch.

“What I really like about this Christmas is there’s a lot of history in there.

“The flashback episode is built around lots of little clues and it will pay off really awesomely I think – the writers, directors and actors have done a brilliant job in just making it feel really clever and exciting. We’ve done it for a really good reason,” she continued.

EastEnders returns this evening on BBC One.

READ  Power season 6 finale delay: Starz reveal episode 15 push back – and fans are not happy
Share on FacebookShare on TwitterShare on PinterestShare on Reddit
newsgrooveDecember 27, 2019