EastEnders spoilers: Denise Fox devastated over new feud as she CLASHES with Kim? 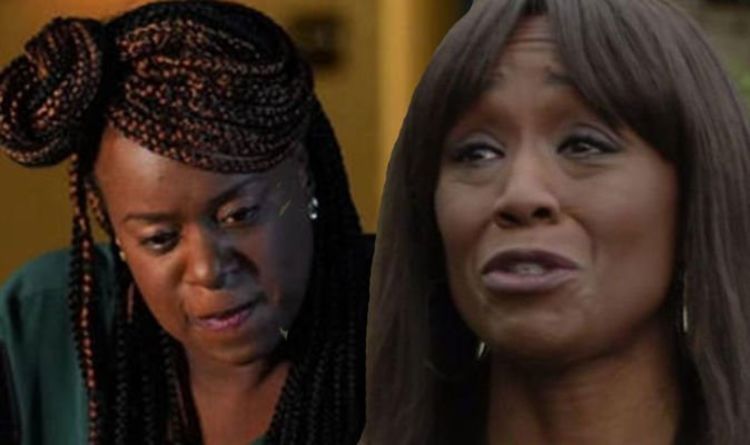 Denise (played by Diane Parish) has been enjoying her latest run of luck on EastEnders, with her business venture taking off and a new romance blooming with heartthrob Jack Branning (Scott Maslen).

It’s more than can be said for Kim (Tameka Empson) who has been trying her best to help her sister at the salon, while still gripped by the disappearance of her estranged husband, Vincent Hubbard (Richard Blackwood).

Viewers of the BBC soap know Vincent was last seen in the back of a car, being held at gun point by gangsters after he believed he’d reported them to the police about the New Year’s Day heist last year.

Kim is unaware her husband is possibly dead and although it seemed she had accepted he was never coming back, the arrival of Chantelle (Jessica Plummer) brought old heartache back to the surface as the hairdresser moved into the property Kim had lived in with her husband.

Since then, Kim has been hostile towards Chantelle, which has become especially difficult for Denise as she recruited the newcomer as the head stylist at her salon.

Although Kim agreed to move past her grievances with Chantelle, it seems the anguish will come to a head once again in upcoming episodes.

With the hair salon picking up custom, Kim and Chantelle soon find themselves at loggerheads one again, forcing Denise to step in.

Hoping to make her sister see some sense, Denise pulls Kim a side and gives her a stern talking to about her attitude problem.

Not one to take the truth so easily, Kim is unlikely to take here sister’s words of advice so lightly and could end up walking out on the business altogether.

It’s not yet known if Kim will succumb to Denise’s warning but if she does give up salon, could this mean she will cut ties with her sister as she believes the businesswoman holds more loyalty with Chantelle?

Knowing her sister is dating Jack and as a single woman herself, could Kim hit back by trying to flirt with the former police officer to rile her sister?

Whatever happens, Kim will clearly have to address her issues regarding Vincent, but with so many old faces returning to the Square, could the supposedly deceased character rise from the dead?

Speaking of a potential return to Walford on Good Morning Britain earlier this year, actor Richard Blackwood, 47, said he’d be up to make a comeback.

The actor said: “I would go back. Eastenders, I would go back. I’ve just had a baby on the show, I don’t want to be an absentee dad,” referring to the birth of Kim’s son at the end of last year.

Could Denise’s words give Kim the incentive to realise she does need answers to Vincent’s disappearance and begin a search for her husband?

Elsewhere in Walford, market trader Kush Kazemi (Davood Ghadami) has been caught in the middle of a love triangle with Kat Slater (Jessie Wallace) and Bex Fowler (Jasmine Armfield).

With young Bex confessing her love to Kush earlier this week, her father’s best friend was forced to explain they were only friends and there was no romantic connection between the pair.

Although the teenager was left heartbroken, EastEnders’ former boss John Yorke has teased more drama to come for the market trader.

Viewers will have to wait and see how the storyline unfolds, but the former boss seemed to hint at a secret Kush is hiding as he also revealed new characters could be on their approach to Walford.

Speaking of his successor, Kate Oates, John told Express.co.uk: “There are loads exciting secrets, explosions and loads of stuff that’s going to continue with Kate Oates.

EastEnders continues Monday at 8pm on BBC One.