The show saw an explosive climax for its 35th anniversary on Friday after Sharon Mitchell found out her son Dennis Rickman, 13, died moments after she gave birth.

And the BBC soap will return on Monday as Sharon, played by Letitia Dean, returns to the Square, struggling to cope with Dennis’ death.

The episode will see Ian and Kathy Beale, played by Adam Woodyatt and Gillian Taylforth, rally round the devastated mother as she mourns her loss while caring for her newborn baby. 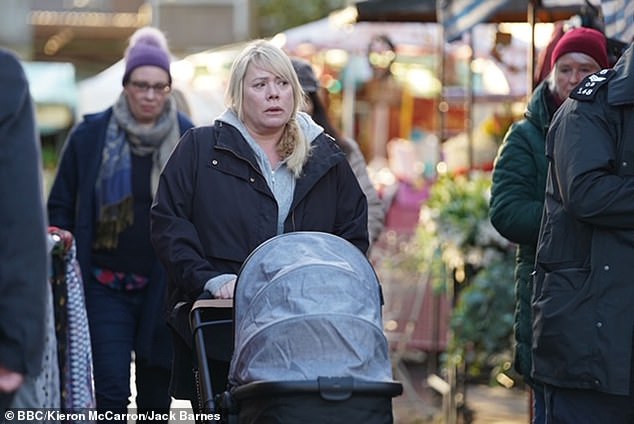 Grieving: The BBC soap will return on Monday as Sharon Mitchell, played by Letitia Dean, returns to the Square, struggling to cope with Dennis’ death while caring for her newborn

Meanwhile Ian is wracked guilt and inner turmoil as he is torn over whether to reveal the truth behind Dennis’s death to Sharon.

Friday’s episode saw the community take a group boat trip on the Thames to celebrate their local, The Queen Vic, being awarded London’s Best Pub.

In the previous episode, Dennis was locked in the storeroom of a boat by Ian as revenge for his son Danny, played Clay Milner Russell, being beaten up after converting to Islam.

As water began to rise the panicked Dennis left a voice mail on his mum’s phone explaining the situation, but Sharon has yet to hear the message. 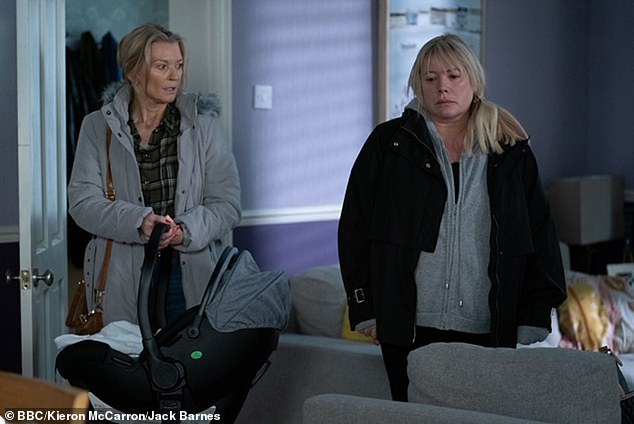 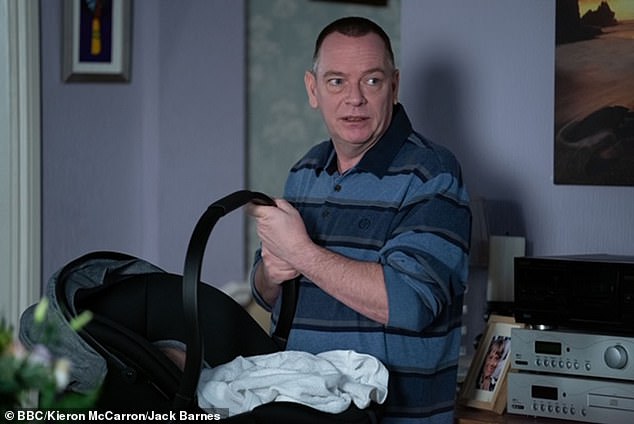 Guilty? Ian is torn over whether to reveal the truth behind Dennis’s death to Sharon, while he helps out with the baby

Ian managed to free the boy before the water fully submerged the room, but Dennis drowned while trying to escape the boat, and was pronounced dead by paramedics with both Keanu Taylor (Danny Walters) and Phil Mitchell (Steve McFadden) watching on.

Weeping with guilt Ian was comforted by others and hailed as a hero for trying to save the youngster.

Now the truth may out that he was partially responsible for his delayed escape from the boat. 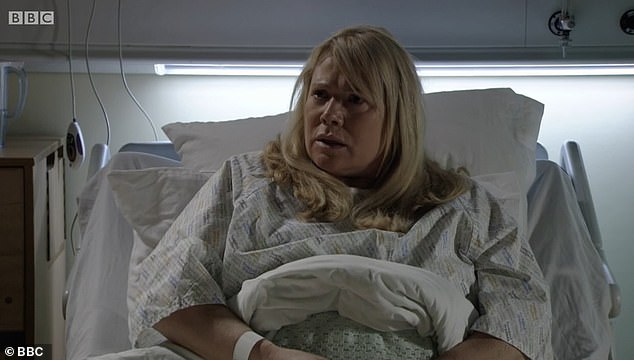 Traumatic: Viewers watched on as Sharon Mitchell learnt the fate of her son from Keanu Taylor just moments after giving birth

While the fatal incident took place Sharon was in hospital giving birth, as she’d gone into labour early after being held at gunpoint by Phil’s son Ben Mitchell (Max Bowden) who was holding her hostage.

The camera then cuts to Keanu visiting Sharon and his baby in the hospital, with Sharon quizzing him on the whereabouts of Dennis.

Unable to speak, Sharon persistently asks where her son is before eerily being heard screaming: ‘Oh my baby.’ 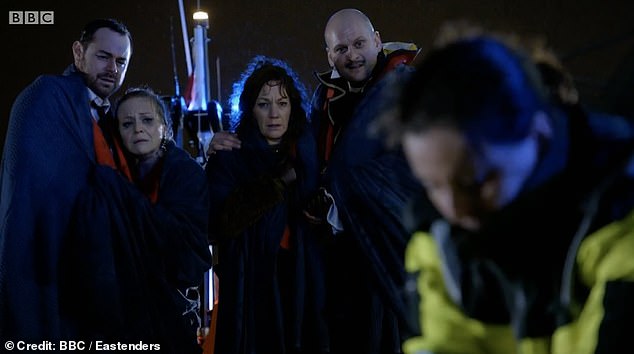 Heartbreaking: Dennis was unconscious when he was rescued and paramedics pronounced him dead at the scene, as the rest of the characters on the boat watched on

She was later seen blaming Dennis’ death on herself, after promising Louise on her son’s life, and turned on Keanu as she told the father of her newborn child she never wants to see him again.

‘I thought this is what love looked like. If you and me had never… if I’d never let you into my life, I’d still have my son,’ she sobbed.

‘Get out. I never want to see you again,’ she told Keanu, before screaming at him to leave. 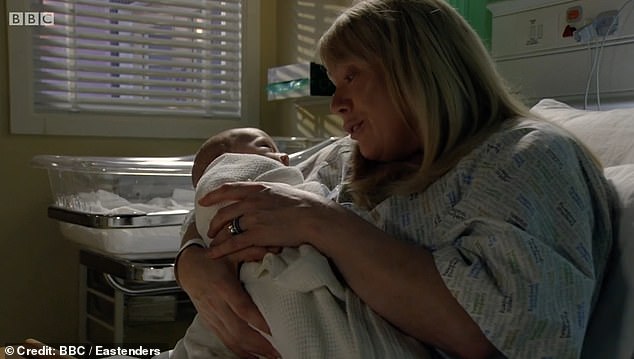 Unaware: Sharon had been in hospital after going into labour early – thanks to Ben Mitchell holding her hostage and at gunpoint 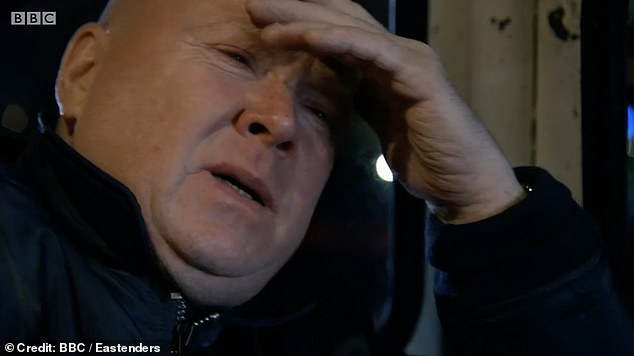 Fans were quick to react on Twitter, with one viewer calling Dennis’ death a ‘bold move’. They wrote: ‘Oh my God, it is Dennis. I cannot believe they killed off Dennis. That’s a bold move #EastEnders.’

Another said: ‘Such an amazing episode and very sad to see Sharon give birth to her newborn son and also hear the news that Dennis passed away on the boat #EastEnders.’

‘That’s a bold move!’ Viewers were quick to react to the tragedy, with many admitting they weren’t expecting Dennis to be killed off

‘#EastEnders I can not get my head around this RIP Dennis. Now will Ian get his head out his ar*e or will this be the turning point of another breakdown?! Sharon didn’t deserve this one,’ a fourth tweeted.

Before his death, Dennis had tearfully apologised to Ian for abusing Bobby online. He had also left a voice note for mum Sharon explaining that Ian had locked him in a changing room on the boat and he couldn’t get out.

Ian and Dennis had fought, after Ian learned Bobby had been attacked and was hospitalised with a bleed on the brain.

Fans are now eager to see how the drama will unfold, once Sharon’s listens to the voice note Dennis had sent her.

EastEnders continues on Monday at 8pm on BBC One. 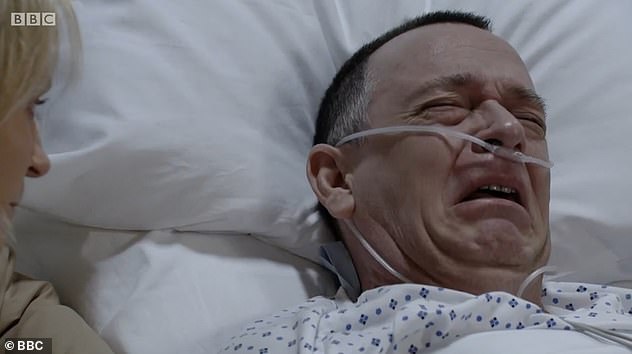 Explosive: Before his death, Dennis had tearfully apologised to Ian for abusing Bobby online and he’d also left a voice note for mum Sharon explaining that Ian had locked him in a room

Ozark season 3: Was Helen Pierce's fate teased from this scene?

How many episodes in Gordon, Gino and Fred: American Road Trip?

Homes Under The Hammer: Martin Roberts recalls discovering a needle in 'dodgy' property

'Modern Family' finale recap: How life changes for all, from empty-nesting to far-away moves

'Modern Family' finale recap: How the families move on but stay together (Hint: Hugging helps)