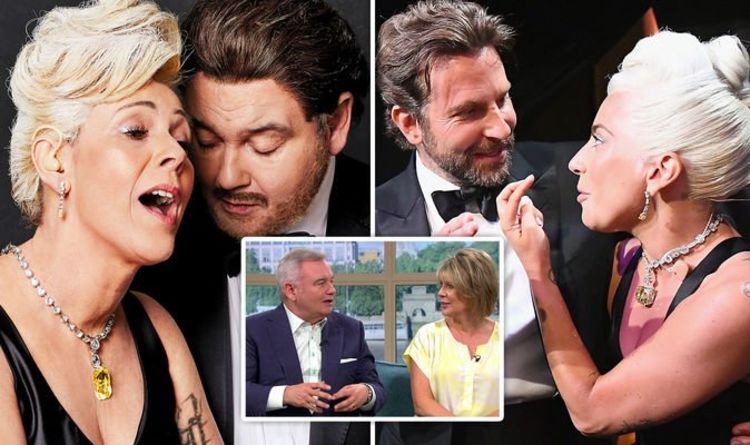 This Morning presenters Eamonn Holmes, 60, and Ruth Langsford, 59, reenacted Lady Gaga and Bradley Cooper’s look from their Oscar Awards performance earlier this year. Lady Gaga, 33, and Bradley, 44, play on-screen lovers in the hit film A Star Is Born and built up a close friendship during their time together.

At the Oscar Awards earlier this year, viewers frowned upon the pair’s cosy display during their performance of Shallow, while the actor’s rumoured ex-girlfriend Irina Shayk looked on from the audience.

Addressing the controversial moment, Ruth told the magazine: “I have to say, when I saw that performance at the Oscars, I wouldn’t have been happy if that was you, Eamonn, and I was sitting in the audience.

“I thought there was way too much chemistry.”

Eamonn replied: “But you know what it’s like to sit next to a simmering sexpot when you’re presenting.

“And we worked hard on it, we worked for days. We mapped the whole thing out—it was orchestrated as a performance.”

Elsewhere, Eamonn and Ruth are currently fronting This Morning daily in the run-up to Christmas.

The presenter candidly opened up about a time the pair’s Christmas wasn’t the happiest of days in a recent candid interview.

Recalling a time where the festive period was busy for him, he said: ”I said, ‘I am so busy I will buy you anything you want but the return receipt is about five days, so shall I give you money?’

“She said, ‘Just come home and as long as I’ve got Christmas with you, that is the important thing.’”

He added: “I gave her an envelope with money in it and she gave me the Christmas dinner.

“She put it all on a plate and then fired it at my chest. I went all over and down me and that was a pretty bad Christmas.”

He added: “When a woman says just give me money, she doesn’t mean it!”

This Morning continues today at 10.30am on ITV. Heat Magazine’s Christmas issue is out now.