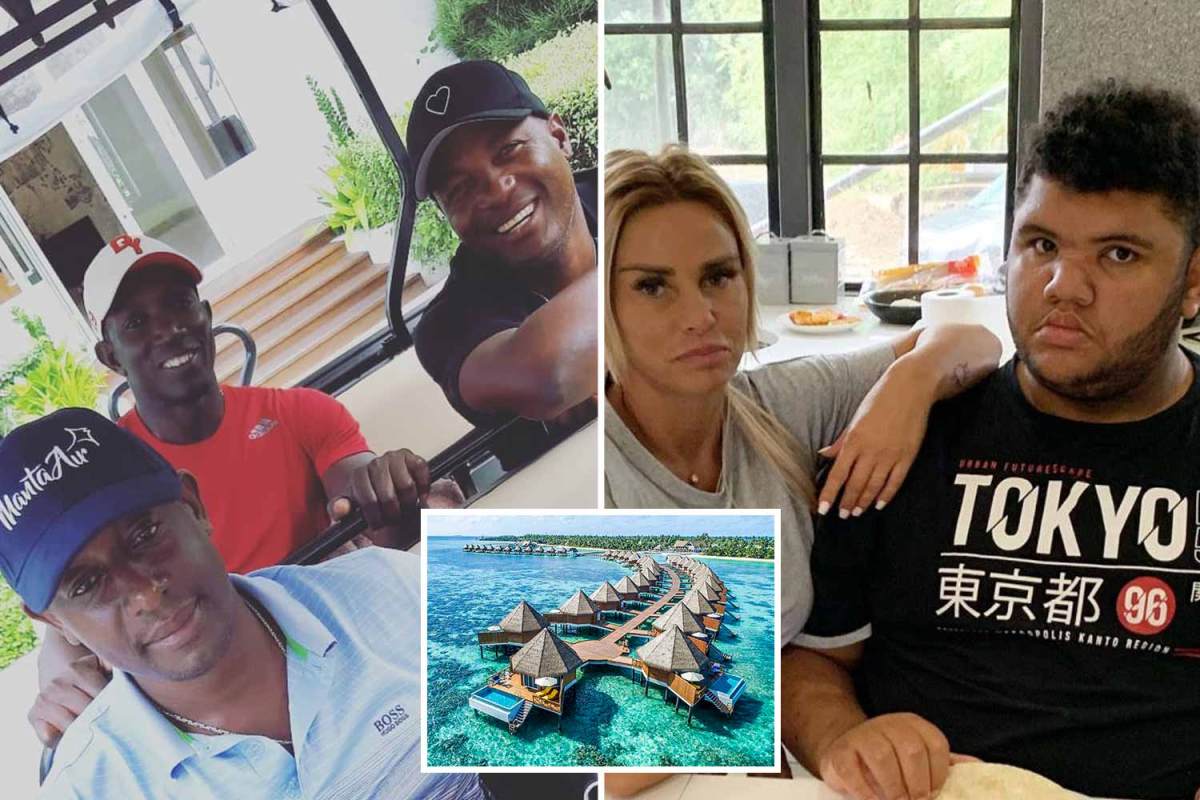 DWIGHT Yorke has gone on a luxury holiday to the Maldives after Katie Price begged him to see his estranged son Harvey.

The former glamour model, 41, shared a video last night of their 17-year-old son begging to see his “daddy”.

However, the ex-footballer has ignored the public outcry as he shared photos from a posh resort in the Maldives, after spending Christmas in Dubai.

The photo shows him in a golf buggy alongside former footballer Russell Latapy and cricketer Brian Lara.

Katie dated Dwight in 2001 but they split before Harvey’s birth.

Since then Katie claims he has only seen the 17-year-old on a handful of occasions – despite her desperate pleas for him to be in Harvey’s life.

Her latest was a video on her Instagram page earlier this evening, with Katie asking her son: “Who do you want to write a message to on Instagram?”

His mum asks: “What do you want to say?” to which the teen shares: “I love you Daddy Dwight, you look beautiful.”

“Harvey doesn’t deserve this, he see’s his other son Tiger so I don’t understand!

READ  Outlander season 5 cast: Who is in the cast of Outlander?

“He does charity work for different kids charities yet doesn’t see or support his own son. I don’t get it!”

The mother-of-five posted the same video to her Instagram Story, tagging Dwight once again as she added: “Please see your son, get in contact – have a heart as Harvey doesn’t deserve the fact you see your other son and not him!

Earlier this year, Katie revealed her plan to re-introduce her son to his father by “driving up to his house and banging on his door”.

In October, the star opened up about her son’s absent father on her YouTube channel, telling the camera: “What I would like to do is turn up to his dad’s place – Dwight Yorke’s – ring on the doorbell and be there with Harvey, for him to see Harvey.

“That’s what I would like to do and I will do that. I think Dwight should start entering Harvey’s life, it’s been years.”

Harvey is diagnosed with blindness, Prader-Willi syndrome and he is also on the autistic spectrum.

In an extract from Katie’s autobiography Reborn, the mum-of-five said: “The last time Harvey’s biological father Dwight Yorke saw him, which was around eight years ago, the first thing he asked was why Harvey was so big. Why was I overfeeding him?

“I’d explained Harvey’s condition to Dwight many times, but he refused to understand it and kept going on about him being fat.

“It’s sad that he is unable to accept Harvey for who he is and seems unable or unwilling to work within his limitations.

“On that occasion, I think Dwight wanted to blame someone for the fact that his son is disabled.

“I have always said that if Dwight could see what a courageous and talented boy Harvey is then he would enjoy being with him so much.”

In November 2018, The Sun Online revelaed Katie was demanding £500,000 from Dwight to make up him missing years of child support payments for son Harvey.

Katie was declared bankrupt over her £800,000 debts and has been forced to sign her 11-bed, £1.35million mucky mansion over to a trustee.

Last year, Dwight Yorke was in a similar situation as he faced bankruptcy at an insolvency hearing.