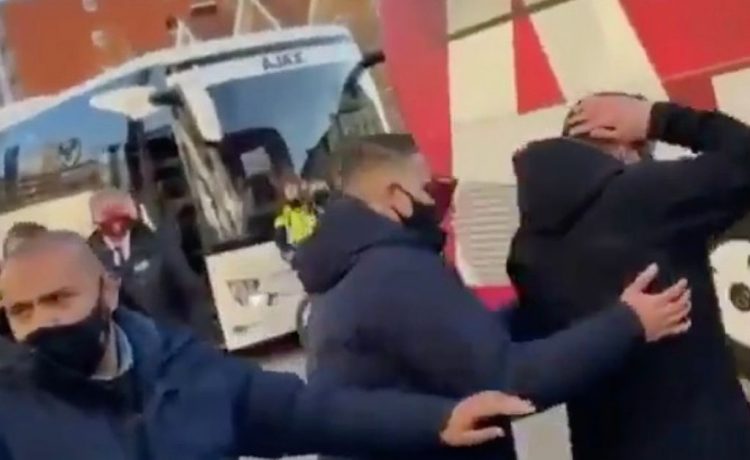 Ajax star Dusan Tadic was pelted with coins as he attempted to board the team bus following Sunday’s 1-1 draw with PSV.

The attacker scored a 92nd minute penalty to level the scoring late on in the match, which was slightly overshadowed by some scenes at the end.

After netting the crucial equaliser, Tadic was seen in an angry altercation with Denzel Dumfries.

The former Southampton man ran straight over to Dumfries to celebrate in front of him.

The ugly scenes spilled over after the match as well, with the two seen arguing on the pitch.

And speaking afterwards, Tadic claimed Dumfries had insulted him before taking the spot-kick.

He said: “I picked up the ball and put it down. Then three players came up to me, kicked the ground, and made a hole at the spot.

Tadic also dismissed Dumfries’ claims that he had said something about the PSV star’s mother.

Dumfries said: “I don’t want to point the finger right now, but you shouldn’t talk about my mother.

“I do not appreciate that and you just should not do that, it does not belong on the football field or next to it.

“If you call me names, I’m fine with it.

And afterwards, as Tadic was getting back onto the coach, he was pelted with coins from angry PSV fans.

Despite there being no fans in attendance, PSV supporters had to be held back by railings to stop them from getting to Tadic.

In a clip shared on social media, Tadic was seen getting hit straight in the side of his head by a coin thrown by a PSV supporter.

Tadic was then hurried onto the team coach as he clutched at his head while being protected by security.