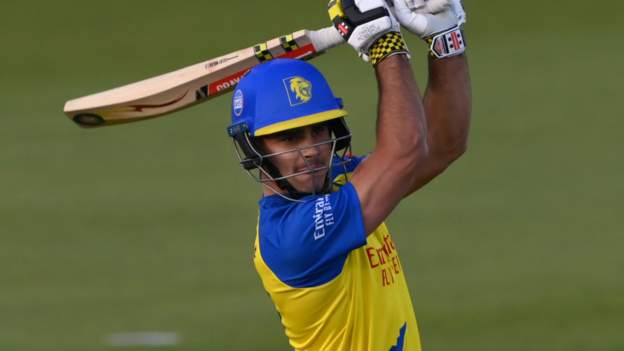 Durham shrugged off a Covid case at the club that has forced some players to self-isolate as they comfortably beat Lancashire Lightning by six wickets with 14 balls to spare in the T20 Blast.

With a number of players and other staff self-isolating, Ben Stokes was in the dugout for potential 12th-man duty despite still recovering from a broken finger. But after restricting Lancashire to 151-6 despite Liam Livingstone’s 65, Durham cruised to 153-4 in reply.

It was their third win in four games, but twice winners Northants Steelbacks have now lost four out of four in the North group after suffering a five-wicket defeat by Derbyshire Falcons.

Gloucestershire beat Middlesex by two runs via the DLS method after rain ended their South group game with two overs remaining, but only five were bowled in a no result between Surrey and Sussex at the Kia Oval.

It meant both sides lost their 100% record in this season’s competition, having previously won three out of three, but they both remain unbeaten.

Having been named in England’s squad for three T20 games against Sri Lanka, Liam Livingstone again showed he is in excellent form at the Riverside.

Having recently made an unbeaten 94 against Derbyshire, he had to rein himself in slightly after Finn Allen and Jos Buttler departed in quick succession – Buttler holing out at mid-wicket for a duck from only the third ball he faced.

Steven Croft, playing in his 200th T20 match, made 25 as he helped add 55 in five overs before Livingstone was caught at long-off from the bowling of Matty Potts (3-34), having struck two sixes in his 54-ball knock.

Durham were soon ahead of the rate they needed as David Bedingham and Graham Clark put on 76 for the first wicket in just 6.5 overs – and Bedingham hit three sixes in his 58 off 39 balls before Livingstone had him caught behind.

The end came with two balls remaining of the 18th over as Ned Eckersley found the boundary off Croft as Durham moved up three places to third in the group.

Twice winners Northants slumped to 81-7 at Derby after opting to bat first on a slow, previously used pitch, but reached 141-8 thanks to a 59-run partnership between Graeme White (37) and Tom Taylor, who finished on 20 not out.

Derbyshire were 47-3 in reply before Matt Critchley (44) and Leus du Plooy put on 81 in nine overs – and Du Plooy won the match with a perfectly-judged ramp for six off Tom Taylor to see them to 143-5 with 10 balls in hand.

The left-hander finished with 48 not out from 38 balls and also passed 200 runs in this season’s competition.

Sixes off Finn make the difference

Earlier, an exciting finish was in prospect at Radlett, with Gloucestershire 157-5 after 18 overs, replying to Middlesex’s total of 179-5.

But rain prevented any further play and sixes hit by Ryan Higgins (20 not out) and Ian Cockbain (62 not out off 39 balls) off Steven Finn in the 18th over pushed the visitors in front on the DLS calculations.

Middlesex’s total was based on a superb 67 off 41 balls by Joe Cracknell – his second T20 half-century of the season – backed up by England captain Eoin Morgan’s 38 off 22.

Gloucestershire were given a flying start in reply as Chris Dent smashed two sixes in his 32 off 15 balls before he was caught on the point boundary, but they slumped to 123-5 in the 15th before Cockbain and Higgins came together in what proved to be a match-winning stand.

Little action was possible at The Oval, but there was time enough for 16-year-old Sussex spinner Archie Lenham to further underline his potential by taking arguably the best catch of the evening.

Jason Roy top-edged the third ball of the game bowled by David Wiese, attempting a big hit towards square leg, and Lenham sprinted back with the ball travelling over his shoulder and took the catch just inside the boundary.

Will Jacks hit three successive sixes in an over from Tymal Mills and had 38 not out off 18 balls, with Surrey 53-2, when rain intervened.