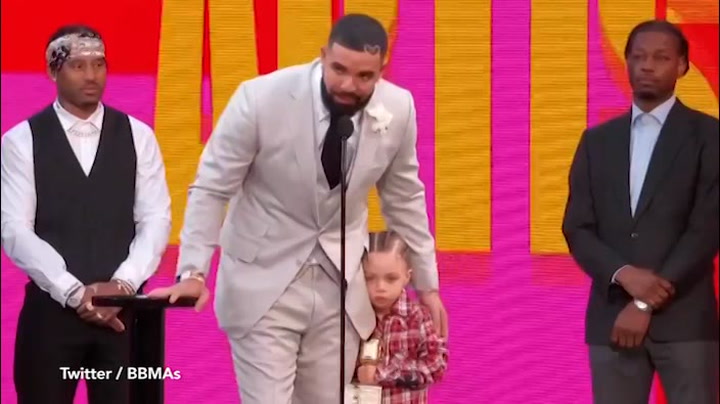 Drake called himself “co-parent of the year” as he rapped about his son on his new album Certified Lover Boy.

And on Drizzy’s sixth studio album, which recently dropped, his son (although not by name) was mentioned on the first track Champagne Poetry.

“I been hot since the birth of my son,” 6 God raps in the intro of the track.

Towards the end of the song – which sampled The Beatle’s Michelle – Drake says: “I’m bigger now than before.

“Co-parent of the year, we figured out a rapport.”

It’s not the only song on CLB which mentions his son, as Papi’s Home has him singing: “I walked out on my only son… See your mother raised a fine young man. Daddy’s home. And I know I missed so much of your life.”

Sophie with Drake and Adonis
(

In March 2020, Drake posted pictures of Adonis for the first time and shocked fans around the world.

Drake even brought his son on stage with him at the Billboard Music Awards back in May.

He was crowned artist of the decade and was recognised for his remarkable chart dominance since 2010.

Drake’s music to date has earned him nine number one albums in the US and six number one singles.

As he accepted the accolade, Adonis clutched the award for his dad and clung to his side.

“I’m really self-conscious about my music and even if I do a good job I always wonder how I could have done it better.

He now shares more pictures of his son
(

“I rarely celebrate anything and just for anyone watching this wandering how this happened, that’s really the answer – it’s being so unsure of how you’re getting it done you kind of keep going in the hopes of figuring out the formula.”

He added: “I know I’ve spent an incalculable amount of hours trying to analyse all the things I did wrong, but tonight for once I’m sure as hell we did something right.”

Drake became the most awarded artist in the history of the ceremony after the win.