Dr. Phil has been honored with star on the Hollywood Walk of Fame after more than two decades at the top of the daytime television game.

The Hollywood Chamber of Commerce presented Dr. Phil McGraw with the 2,688th star during a ceremony in Los Angeles on Friday.

Country music singer-songwriter Ronnie Dunn and Hollywood movie mogul Tyler Perry took to the podium to present the plaque and pay tribute to the TV icon.

He was surrounded by his beloved family, including his proud wife Robin, who planted a sweet kiss on him during the celebration.

His eldest son Jay, who is a writer, producer and the CEO of Stage 29 Productions attended along with his wife Erica and their two children Avery and London.

Dr. Phil’s younger son Jordan wasn’t able to attend the ceremony – the popular musician is currently on tour in Paris with the Jonas Brothers.

His friends including actress Kathy Bates, Sheryl Underwood, Dr. Travis Stork, Dr. Andrew Ordon and CBS television executive Carla Pennington were also in the crowd along with many fans. 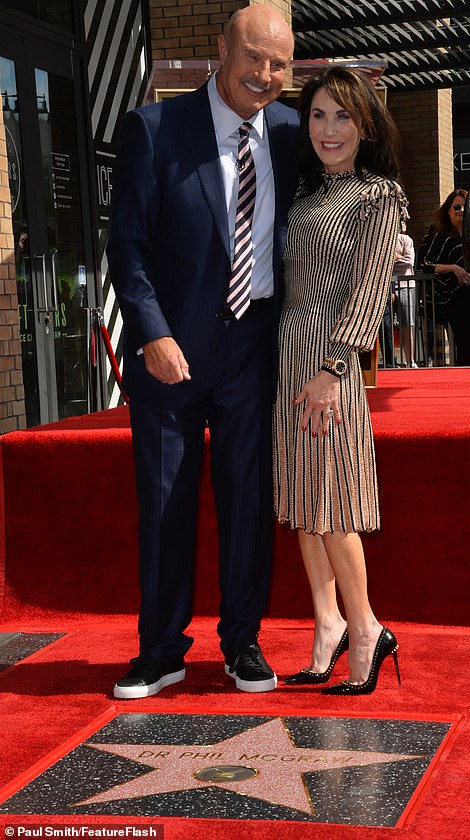 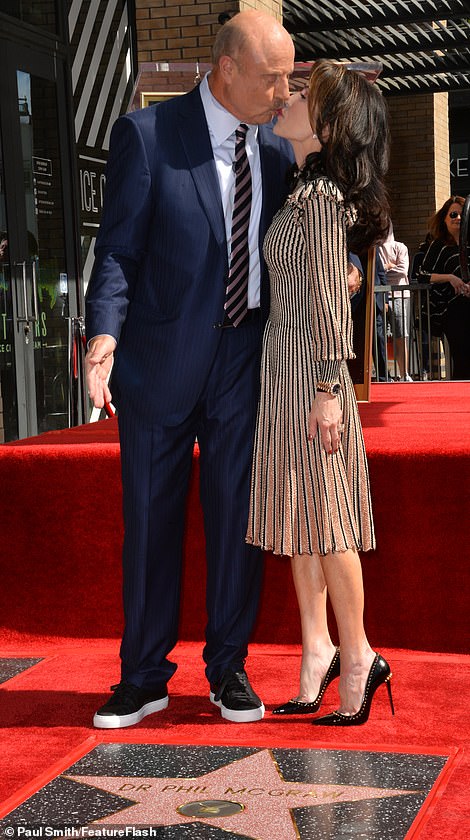 Proud moment: Dr. Phil McGraw was honored with a star on the Hollywood Walk of Fame in Los Angeles on Friday and was joined by his wife Robin

Taking to the podium, Dr. Phil first thanked his devoted wife Robin, telling the crowd: ‘She’s believed in me for 46 years. She is not just an observer she’s such a vital part of that show.’

He also thanked the ‘O factor’ – Oprah – for mentoring him over the years and helping to move his career forward, noting: ‘There would be no Dr. Phil without Oprah.’

He also praised television producer Carla Pennington, who has been working with him ‘since the very beginning’ and gave a shout out to ‘the best team in television’.

He ended his speech by issuing sage advice to the crowd, saying: ‘Star in your own life and drink it in. I am taking my own advice and I am drinking it in.’

After the ceremony, he told DailyMail.com exclusively: ‘One of the first things I remember about Hollywood is the Walk of Fame from when I was 10 or 12-years-old. I remember seeing it in a movie from Fred Astaire or somebody. And, us being not from Hollywood, it just is one of those things that is a real legacy and to be part of it is really amazing. So, we had a lot of fun with it. 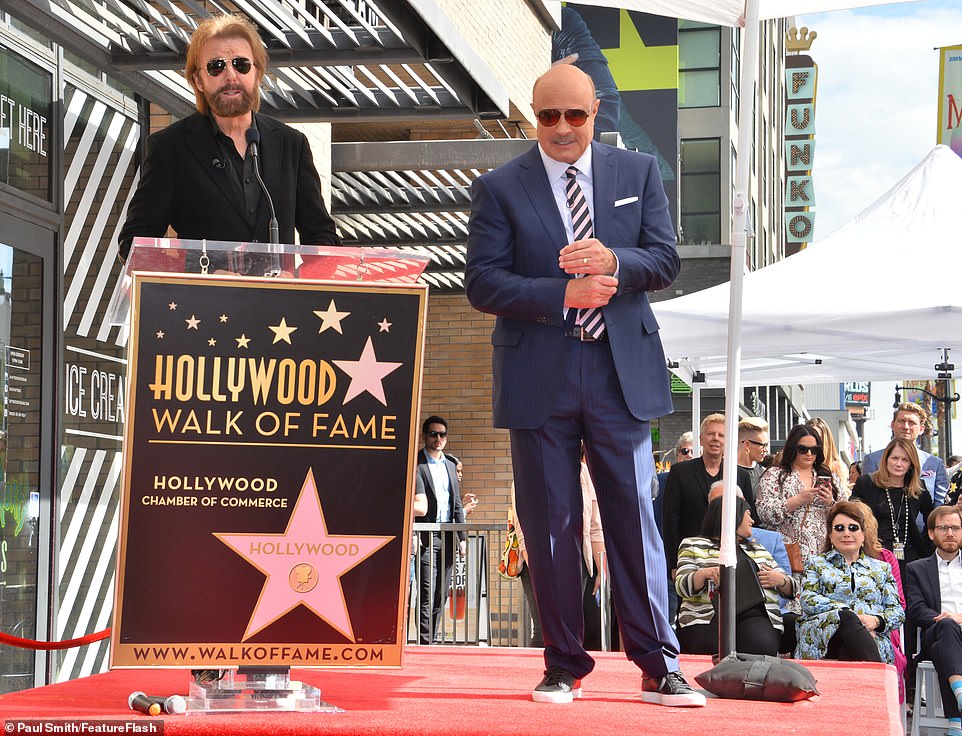 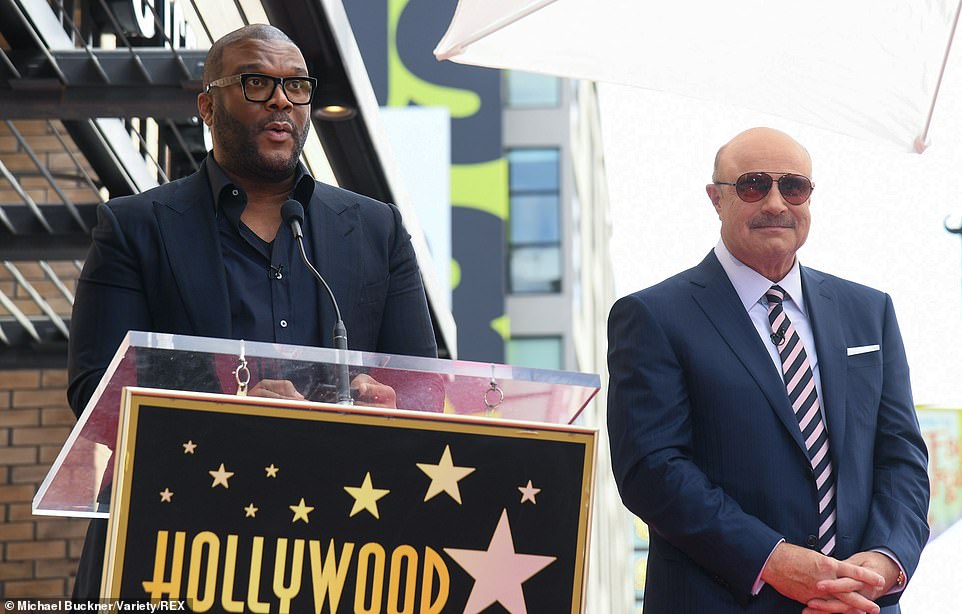 ‘You know it really reminds you of your mortality because that star will be there long after I’m gone,’ he added with a chuckle.

Robin said the ceremony was a pinnacle moment for her and her family, noting: ‘Today brought it all home for me. You know, we’ve been here 18 years, yes, but I felt really at home today because he was being honored with this star. I’ve always believed he deserved it and now I know everyone knows and believes he deserves it. It’s just been a beautiful day for him and I am so proud of him.’

The Dr. Phil show, now in its 18th season and more than 3000 episodes in, debuted in 2002 and after his extraordinary success as an expert commentator on The Oprah Winfrey Show.

He has signed a deal with CBS to continue the show until 2023.

He first met Winfrey in 1995 when he was working at Courtroom Sciences, Inc., the trial science firm which he founded.  Oprah was so impressed with Dr. Phil that she invited him on to her show as a guest expert in 1998.

Dr. Phil previously told DailyMailTV that when Oprah approached him to host his own stand-alone series, he didn’t take much convincing. 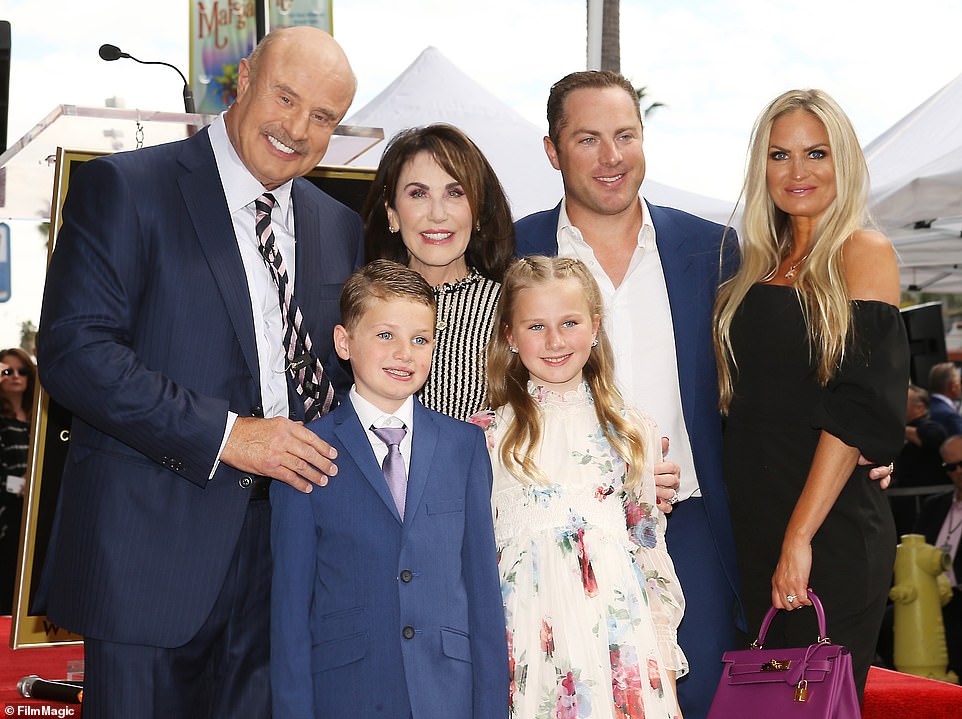 READ  Miley Cyrus Urges Everyone to Be "Compassionate" During Coronavirus Pandemic

Family: Dr. Phil and Robin with their son Jay, his wife Erica and their two children London and Avery 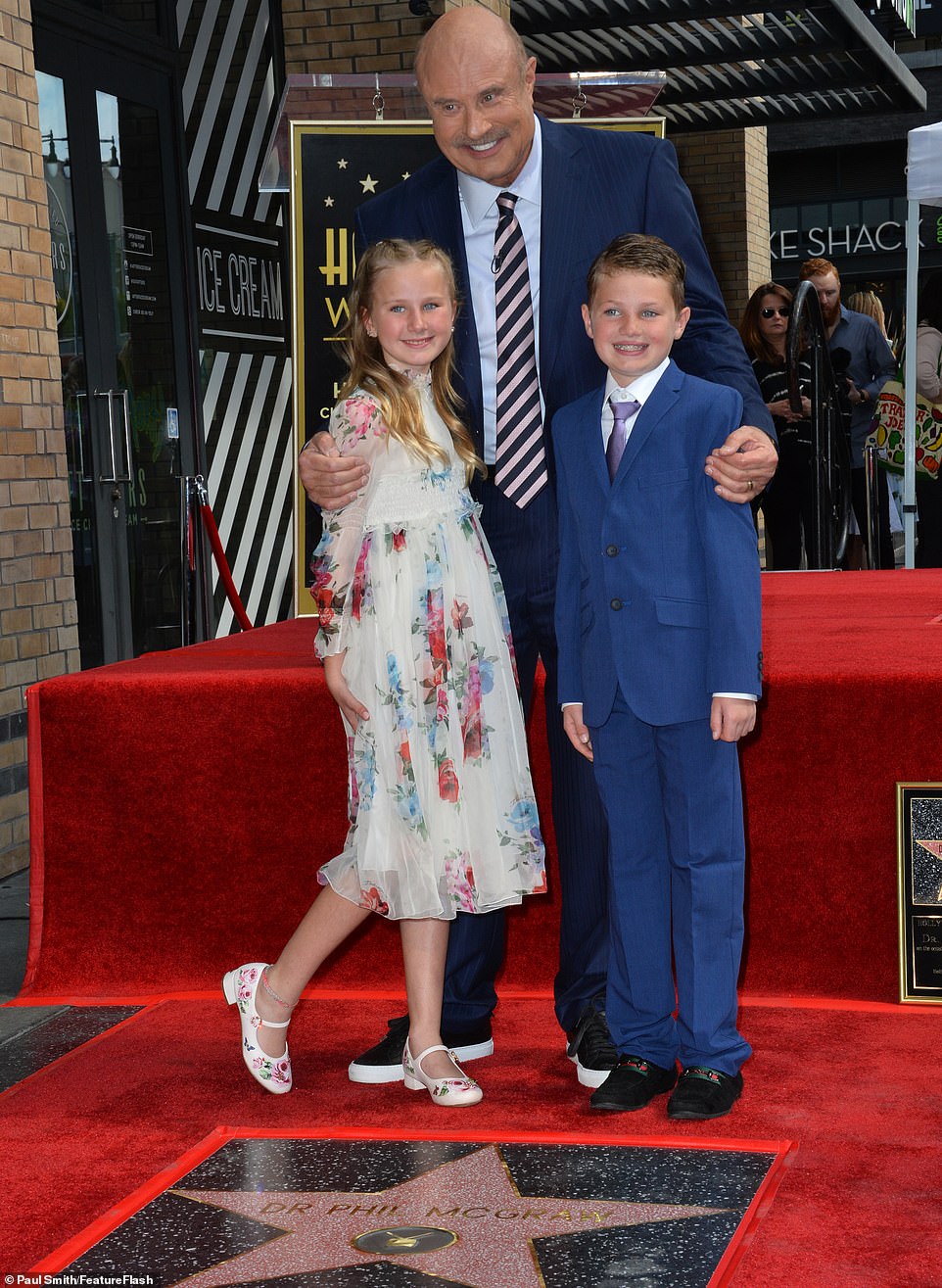 Apple of his eye: The TV star shared a sweet hug with his beloved grandchildren

Oprah informed Dr. Phil that her show was getting a ton of mail for him and that ‘80% of our transcripts that people order are for your shows.’

Since then the daytime series has sky-rocketed to success as the number one daytime talk show several years running and led to several spin-offs, podcasts and even a scripted series.

Many of those shows are produced through Stage 29 Productions, the company Dr. Phil founded with his son Jay McGraw. 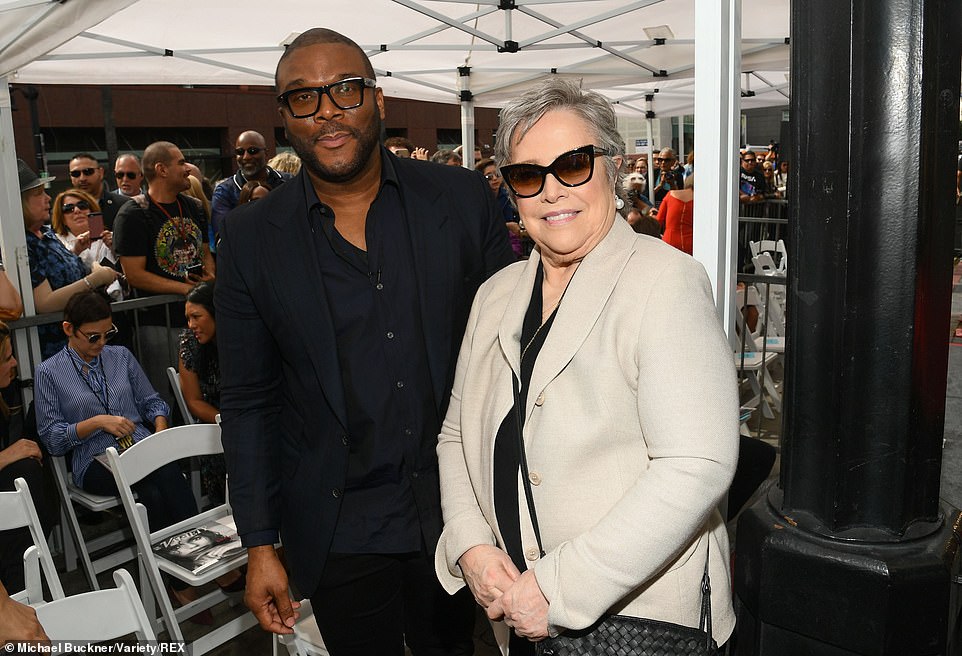 Support: Kathy Bates, seen here with Perry, turned out to show her love for the TV star 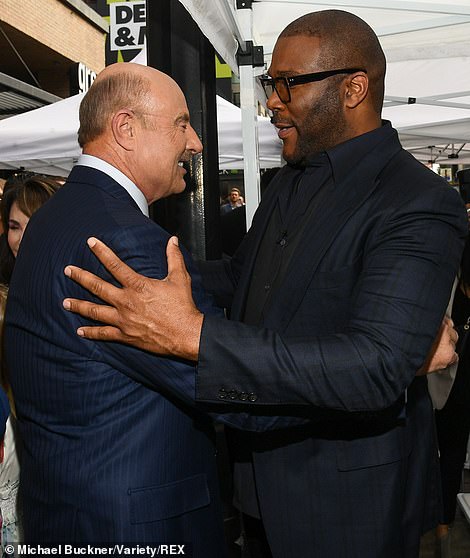 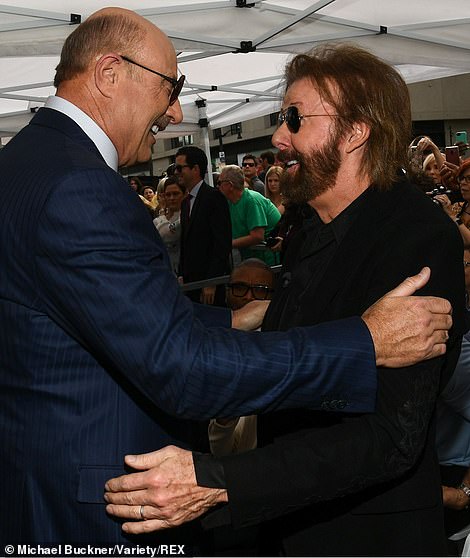 Hug it out: Dr. Phil thanked Perry and Dunn for their kind words after the ceremony 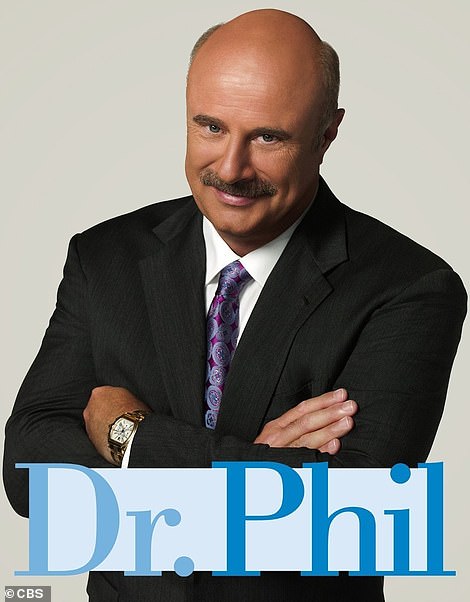 Hit show: Dr. Phil has chalked up more than 3000 episodes of his daytime program and he has signed a deal with CBS to continue to the show until 2023

He has also launched two popular podcasts, Phil In The Blanks, which debuted last year and quickly shot to number one on Apple iTunes, as well as the riveting true crime pod Mystery and Murder: Analysis by Dr. Phil.

As one of the most well-known and trusted mental health professionals, Dr. Phil as used his platform to shine a light on and help people with a ‘variety of emotional and behavioral problems.’

After nearly 20,000 guests, thousands of episodes and over two billion views on YouTube, his work has opened up the conversation around mental health like never before.

And, while his signature to-the-point style with guests makes for must-watch television, his work doesn’t stop when the cameras do.

‘We have now just passed close to $35 million dollars in resources that we’ve made available to our guests after the show. All off camera,’ he previously told DailyMailTV.

‘No show in the history of television has ever even attempted to do anything like that.’ 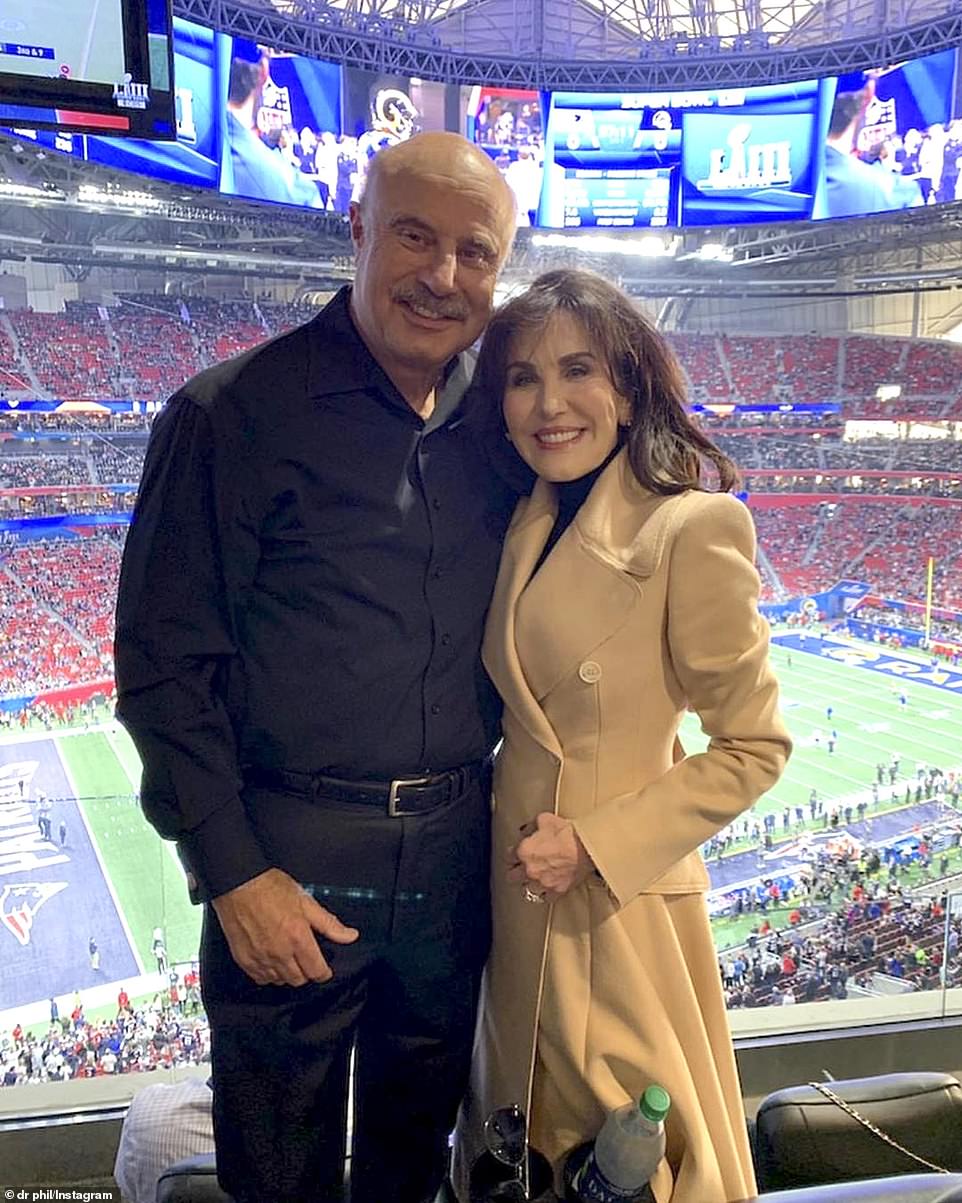 Power couple: Dr. Phil with his wife of over 40 years, lifestyle guru and podcast host Robin McGraw, seen here in a recent Instagram snap. She serves as an integral part of the show

The Dr. Phil Show is a bit of a family affair with his wife of over 40 years, lifestyle guru and podcast host Robin, serving as an integral part of the show.

Robin is a big part of the show and offers her unique commentary on the days issues from her seat in the audience and she has remarkably never missed a single episode.

‘She’s so much more a part of this show than that. She’s kind of my feminine side,’ Dr. Phil has said.

In addition, Robin runs skincare empire, The Robin McGraw Revelation, has authored number best-selling books, hosts her podcast I’ve Got a Secret and runs her beloved charity, When Georgia Smiled, named for her mother. 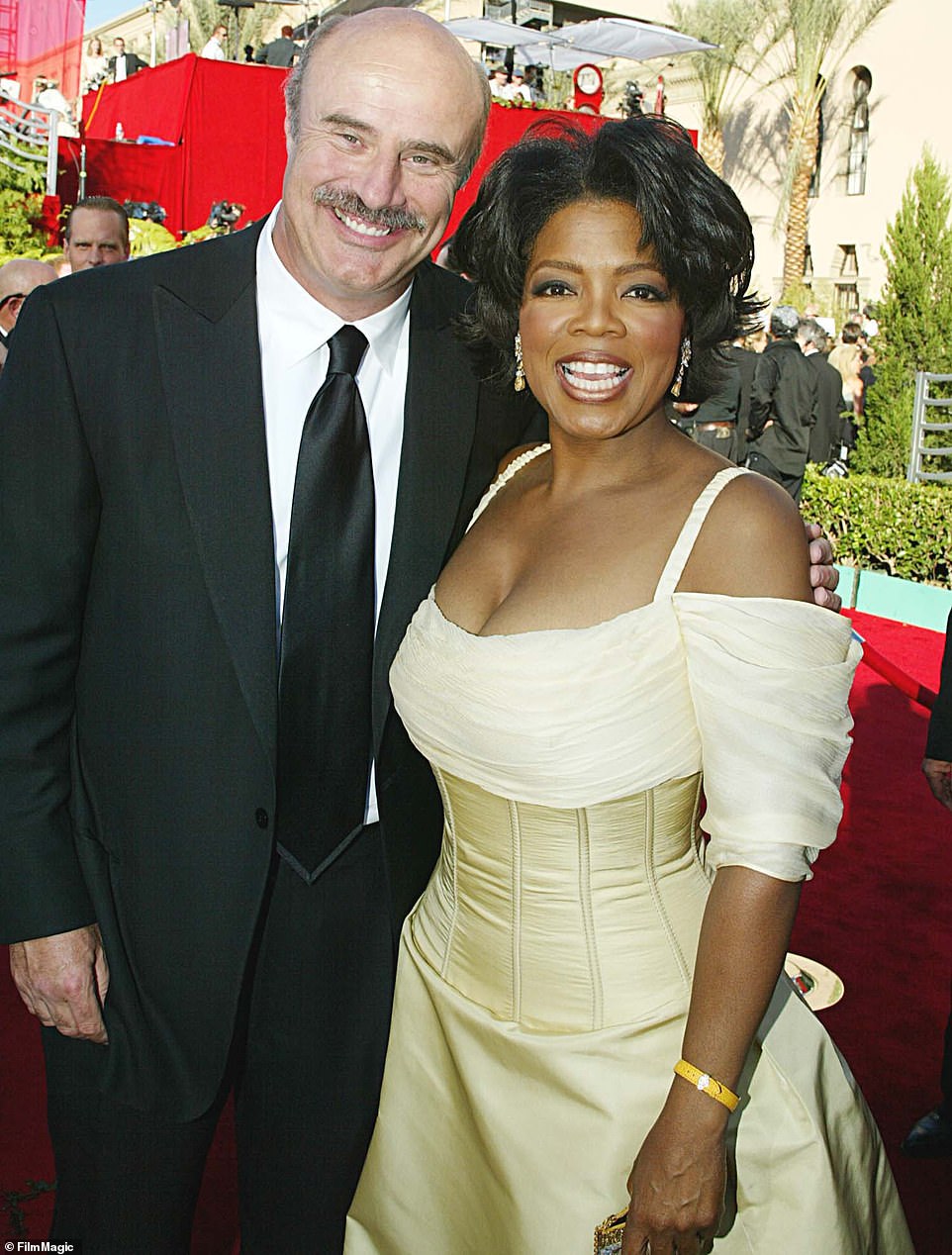 A start is born: Dr Phil’s big break came he first met Oprah in the mid-Nineties – he became a regular guest expert on her daytime program before landing his own show in 2002. The stars are pictured here together at the Emmys in 2002

Lean On Me singer Bill Withers dies at 81 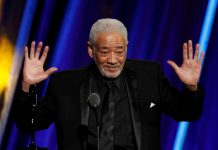