There are many reasons why women are slow to respond to requests for these crucial tests.

In the first instance, a smear test involves a technician taking a sample of cells from the cervix by way of a speculum being placed in the vagina.

Not all women find this easy to accept and undergo.

So would offering a DIY kit boost the numbers getting the cervical cancer screen? We’ll soon see.

British scientists have devised a urine test women can do in their own home.

It’s always an option for the NHS to fast-track the introduction of self-sample tests for cervical cancer. Let’s hope, for the sake of women, it does.

Experience from a US trial of 20,000 is encouraging.

It found more than a quarter of women who usually missed their screening appointments were happy to use home-testing kits sent to them which involve a cervical test that uses a swab to identify the HPV virus, responsible for virtually all cervical cancer cases.

That’s a 50% increase in uptake compared with American women who were only sent reminder letters to go for cervical screening.

Nearly a third of British women ignored their latest reminder for one – and screening has fallen to an all-time low.

Almost five million are currently overdue for testing – all vulnerable to a cancer forming and going ­undiscovered.

For the many women who are too embarrassed or busy to attend a clinic, the chance to test themselves in the privacy and comfort of their own home is a real possibility.

King’s College London and NHS England are carrying out a pilot study of home-testing kits, but the new US study’s success could speed up a ­decision to adopt the test here.

Researcher Diana Buist, of medical care specialists Kaiser Permanente Washington Health Research Institute in Seattle, which carried out the research, said: “It really opens up the possibility for home testing to be a widespread option for women.”

Now, as the result of the British invention, UK women could use a urine test which would be much less invasive. It works by spotting chemical changes in DNA caused by the cancer. 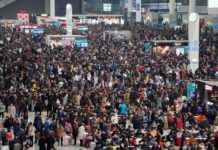