NewsGroove Uk
NewsGroove Uk > Health > DR MICHAEL MOSLEY: I'd have my brain zapped if it helped me quit my chocolate addiction
Health

DR MICHAEL MOSLEY: I'd have my brain zapped if it helped me quit my chocolate addiction


Are you addicted to cigarettes, gambling, alcohol, or painkillers? Or perhaps, like me, you are a chocaholic, who sometimes roams the house looking for a secret chocolate stash or goes out late at night in search of the next fix, despite knowing the damage that fat and sugar is going to inflict on body and brain.

The NHS defines addiction as ‘not having control over doing, taking or using something to the point where it could be harmful to you’.

Based on this, I’d definitely describe myself as a chocolate addict.

So I was fascinated by a new study by researchers from Brigham and Women’s Hospital in the U.S., who have managed to identify a specific circuit in the brain that seems to drive addictions — and which can be switched off (or at least turned down) using something called transcranial magnetic stimulation (TMS).

TMS involves applying a device, which looks a bit like a table tennis bat, to different parts of your head. It creates highly focused magnetic pulses, which generate an electric current that alters the activity of the parts of your brain that are closest to the device. 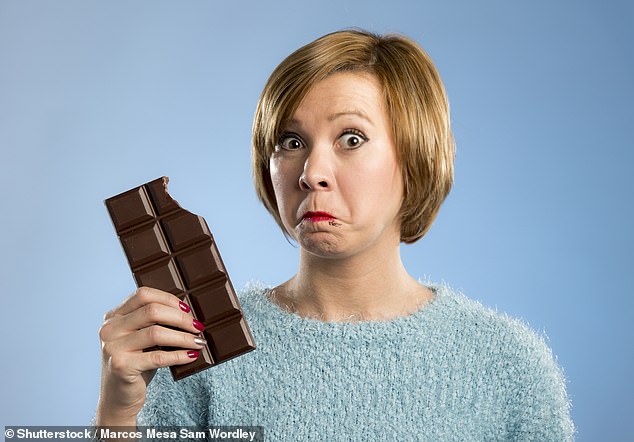 Are you addicted to cigarettes, gambling, alcohol, or painkillers? Or perhaps, like me, you are a chocaholic, who sometimes roams the house looking for a secret chocolate stash? (File photo)

That may sound rather scary, but a few years ago I had it done, while making a documentary about the brain. When they turned it on it felt a bit like someone hitting my head with a soft toy.

Using the TMS device, they blocked my ability to move my fingers (which was weird), then my ability to count to ten, and finally they used TMS to make it almost impossible for me to speak or sing.

F ortunately, it was temporary and I was assured by the researchers that it was safe and they had used it dozens of times on themselves, to switch off a range of things, from being able to see to being able to recognise faces.

TMS has been used in the U.S. for some time to treat cigarette cravings, with good results, and a recent study suggests it also helps wean people off cannabis.

The researchers from Brigham and Women’s Hospital started by looking at brain scans from dozens of people who had suddenly lost their cigarette cravings after a stroke or some other brain injury.

They then compared the damaged areas in these people’s brains with a group who’d had strokes but not lost their desire to smoke. They were able to identify three areas in the brain — the dorsal cingulate, the lateral prefrontal cortex and the insula, which are connected to form what they call an ‘addiction circuit’ —were only damaged in those who had lost their cigarette cravings.

And it seems this addiction circuit is not just related to cigarette cravings, because when they looked at the brain scans of alcoholics who had lost their desire to drink, they found damage to the same areas of the brain.

This is potentially very exciting, because there are millions of people in the UK who are addicted to drugs, alcohol or cigarettes, and existing treatments are both expensive and limited in their effectiveness.

There is a long way to go before TMS devices are likely to be in more widespread use, but if anyone is looking for a volunteer to see if it can curb chocolate addiction, they know where to find me.

If you have a serious problem you will need to see a professional. But whether it is alcohol, cigarettes or chocolate, these five steps should help if you want to give up or reduce your intake:

2. Remove temptation. I’ve found the best way to reduce my consumption of sugary foods is to not have them in the house.

4. Think about your previous attempts to give something up. What worked and what didn’t?

5. Call on friends and family for support. The worst thing you can do is hide your addiction from your loved ones or struggle on alone.

The benefits of picking up the pace

I’ve been a big fan of HIIT (high intensity interval training — doing short bursts of high-intensity exercise) ever since I made a TV programme about it ten years ago and discovered that it could not only significantly improve my aerobic fitness (how strong my heart and lungs are), but also my insulin sensitivity (how well my body controls my blood sugar levels).

Now there is a new reason to embrace HIIT: it suppresses appetite.

In a recent study, published in the journal Nature, a group of young men were asked to cycle at an easy pace for 90 minutes or to do some intense 30-second sprints (i.e. a type of HIIT).

When the U.S. researchers looked at the cyclists’ blood they found that the HIIT had stimulated the production of N-lactoyl-phenylalanine, a chemical that travels in the blood to the brain, where it suppresses the desire to eat. 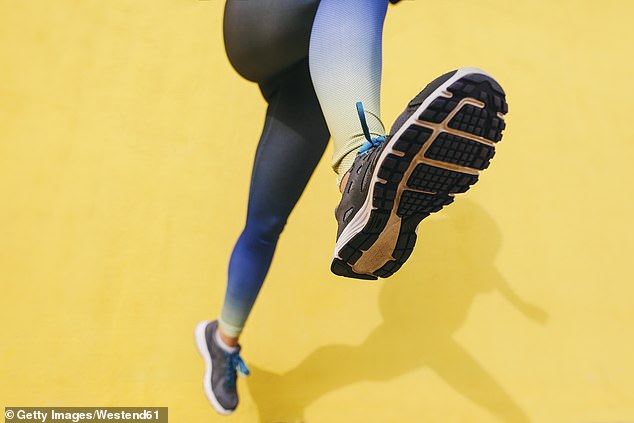 In a recent study, published in the journal Nature, a group of young men were asked to cycle at an easy pace for 90 minutes or to do some intense 30-second sprints (i.e. a type of HIIT) (file photo)

How do you get HIIT into your life? I get my bursts of HIIT while cycling home (we live at the top of a steep hill).

When I reach the foot of the hill, I pedal like crazy for about 20 seconds, then more gently for about a minute, then push myself for another 20 seconds, before easing up again. Sometimes I do a third burst. And that’s it.

If you don’t like cycling, then you could throw in some sprints when jogging or speed up for short bursts when you are walking up a hill.

You have to push yourself. But not for long.

One of the things I find most annoying about getting older is that my hearing is going. When I eat in pubs or restaurants, where there is a lot of music or shouting, I struggle to hear what is being said.

I recently had a hearing test which confirmed what I feared: I can no longer hear high frequency tones and I struggle to pick out specific sentences when there are lots of other sounds.

I shouldn’t be surprised because more than 40 per cent of people over the age of 50 have some degree of hearing loss; rising to 70 per cent of those over 70. Many people try to ignore the fact they are struggling to hear, which is a big mistake. There are serious consequences to ignoring hearing loss.

For instance, a 2020 report in the Lancet showed losing your hearing is one of the main risk factors for dementia.

They think this may be because losing your hearing makes the brain shrink, or because it cuts you off from the world around you, and all the stimulation that provides.

How can you tell if your hearing is bad? The Royal National Institute for Deaf People charity says these are some things to look out for, such as if you turn the TV up louder than your family wants (that’s me); you struggle to hear on the phone (not a problem I have yet); or if you often ask people to repeat what they say (all too true).

If you think your hearing is failing then talk to your GP, who may refer you for a hearing test or even a hearing aid.

I’ve been doing interviews this week, discussing a study that found people who can’t stand on one leg for ten seconds are at much higher risk of premature death.

The reason that this test is an important predictor of future health is because when you are standing on one leg, you are not only testing your muscles, but also the health of your brain, which has to do a lot of hard work to keep you upright.

Give it a try — the test is over when you shift your planted foot or put your raised foot on the ground.

You can improve your balance; I work on mine by standing on one leg while brushing my teeth 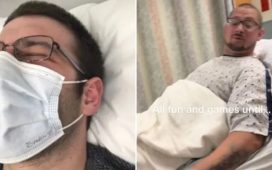