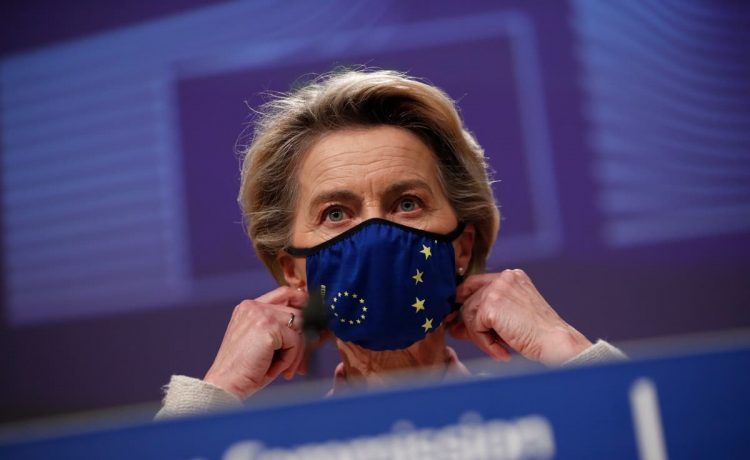 uropean Union leaders were today accused of taking Covidvaccine supplies “hostage” as the bloc threatened draconian powers to stop millions of doses being delivered to Britain.

As Tory MPs branded the EU plan “idiotic”, the most emotive appeal came from a head of a British-backed international body formed to give a billion life-saving jabs to the world’s poorest.

Jane Halton, co-chairwoman of the Covax initiative, said it was “not desirable” to overturn contractual agreements because any scramble for vaccines by the West would inevitably lead to the weakest missing out.

European Commission president Ursula von der Leyen, who has been under heavy fire for the failure of her vaccine programme to procure supplies on time, was set to publish new regulations allowing the Commission to block targeted exports ahead of a summit tomorrow.

The measures could delay Britain’s highly successful procurement by singling out exports to countries with higher vaccination rates than the EU’s dismal rates.

Conservative MPs on all wings condemned the EU plan. Jeremy Hunt, the former health secretary who chairs the Commons health committee, told the Standard: “Step by step the EU is destroying the possibility of a long-term partnership and friendship with its closest neighbour… it is idiotic in the extreme.”

While not a blanket ban on exports, the rules could affect UK contracts involving plants in the Netherlands and Italy. In a hardening of the EU tone, Charles Michel, the summit president, declared it was a “top priority” of the summit to improve the supplies to EU citizens.

Clément Beaune, the French minister for Europe, also said it was time to “strengthen export controls”.

Italy’s La Stampa newspaper alleged that a “treasure” of 29 million AstraZeneca doses had been discovered after a search, allegedly ready for covert delivery to Britain.

Sources suggested the numbers were far lower and actually destined for Mexico but the report raised tensions ahead of the summit.

Relations were not helped by the leak of a poor joke made by the Prime Minister in a Zoom meeting with Conservative backbenchers last night, in which he said the vaccination success was down to “greed”.

Mr Johnson intended a light-hearted reference to Wall Street movie character Gordon Gekko’s dictum that “greed is good” because capitalism drives advances. But it played into unfounded European claims that Britain gazumped the EU by giving a bonus to AstraZeneca.

“The fact that you have vaccine production inside your borders and then you choose to hold hostage doses of vaccine that have been otherwise committed elsewhere is not a situation any of us want to see.”

David Davis, the former Brexit secretary, said: “She is right. The EU is always wrapping up self-interest protectionist measures in self-righteous language.”

Under the EU plans, which were being presented in detail at a College of Commissioners meeting in Brussels this lunchtime, curbs would only be used to stop deliveries to countries with high vaccination rates or that produce vaccines of their own but do not “show reciprocity” by exporting doses back to the EU. Ms Halton said export controls risked repeating the cut-throat competition for ventilators and PPE last spring, adding: “We know that people died as a consequence of this.”

Britain, she pointed out, was “altruistic” as one of the biggest donors to Covax and funders of vaccine research.

But she urged the PM to give away jabs “one for one” once all high-risk people have been protected in the UK. Mr Michel, president of the European Council, said in a summit invitation: “On Covid our top priority is to speed up vaccination campaigns across the EU.

Ms von der Leyen said on Wednesday: “While our member states are facing the third wave of the pandemic and not every company is delivering on its contract, the EU is the only major OECD producer that continues to export vaccines at large scale to dozens of countries.

“But open roads should run in both directions. This is why the European Commission will introduce the principles of reciprocity and proportionality into the EU’s existing authorisation mechanism.”

Government sources were dismayed by the expected measures, recalling that Ms von der Leyen previously said the EU was not planning to overturn lawful contracts for deliveries.

However, leaders of the bloc are under pressure to improve their roll-outs. MEP Philippe Lamberts blamed AstraZeneca, saying “everything points to a company that cannot be relied upon”.

“I’m full of admiration for the UK but that does not exonerate suppliers,” he told Today. “AstraZeneca is a company that… cannot be relied upon.

“They commit, they decommit, then they decommit on their new commitments without any warning.” Asked about the fact that the EU has millions of AstraZeneca doses that are being left in storage and not being used, he admitted that many member states have a poor track record on roll-outs.

But he added: “We obviously have also to do our job, but that does not exonerate suppliers of fulfilling their commitments regardless of what the customer does with their wares.”