Heartbreaking images show dolphins swimming into a harbour in a desperate search for a missing member of their pod – who has believed to have been shot.

Andy Kyle, 63, found a dead dolphin washed up in the harbour at Kingswear, near Dartmouth, Devon on Saturday – with witnesses claiming it had two ‘bullet holes in its head’.

Mr Kyle said he had never seen one washed up there before so was shocked when, the very next day, a pod of ‘at least’ 20 of the mammals were seen at the same spot.

Experts say it is ‘certainly possible’ the dead dolphin was part of the same pod and they had been hunting for their lost friend. 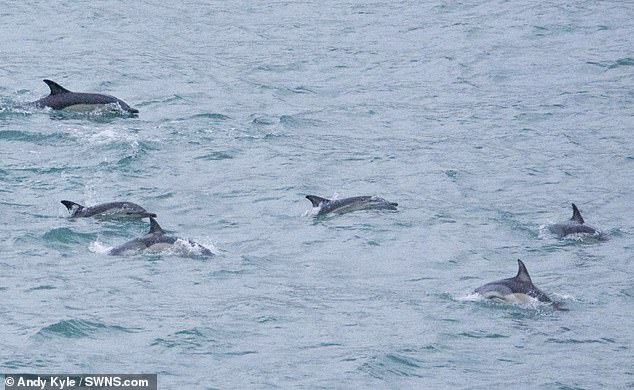 A pod of ‘at least’ 20 dolphins entered the harbour at Kingswear, near Dartmouth, Devon on Sunday, just one day after another was found dead on the slipway 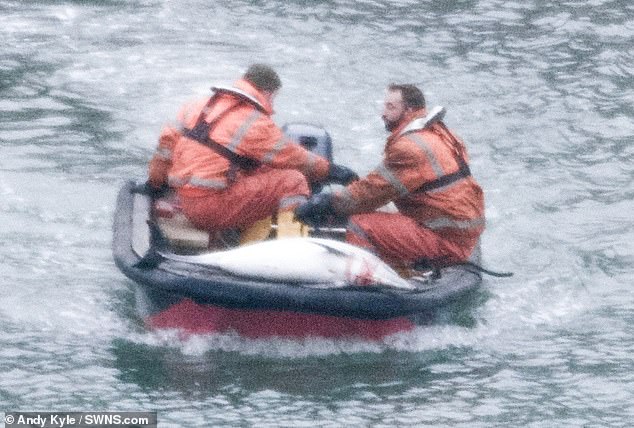 Locals say the dolphin had two ‘bullet holes in its head’ after being shot. Jonathan Hawkins, 53, a retailer and parish councillor for Dartmouth said the person responsible should be ‘ashamed’ (pictured, the dead dolphin is removed from the harbour)

And while the dolphins’ search was described as ‘deeply moving,’ locals expressed their shock at the grisly end to its life.

Jonathan Hawkins, 53, a retailer and parish councillor for Dartmouth said several local people had expressed concerns over the incident.

He added: ‘We had a number of reports to say a dolphin had been washed up on the slipway.

‘We reported it to the Dartmouth Harbour Authority and it was taken away. We were told that it had been shot, that’s what we heard from a few sources.

READ  Moon landing poll: Do you remember NASA’s Apollo 11 landing? 'It was magic'

‘One woman said she saw two bullet holes in the dolphin’s head. We have to trust what residents tell us.

‘If it’s puncture wounds in the head of a dolphin I can’t think what else it could be other than bullet wounds. 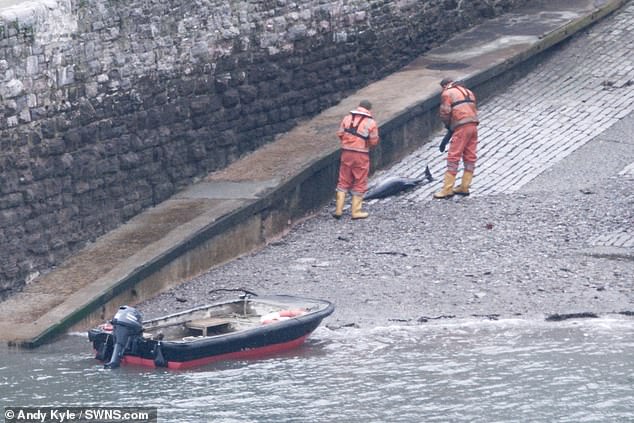 Andy Kyle, whose house overlooks the harbour at Kingswear, said it all began on Saturday at around 2pm, when he saw ‘some activity’ on the slipway leading down into the water (pictured, members of the harbour patrol find a dead dolphin on the slipway) 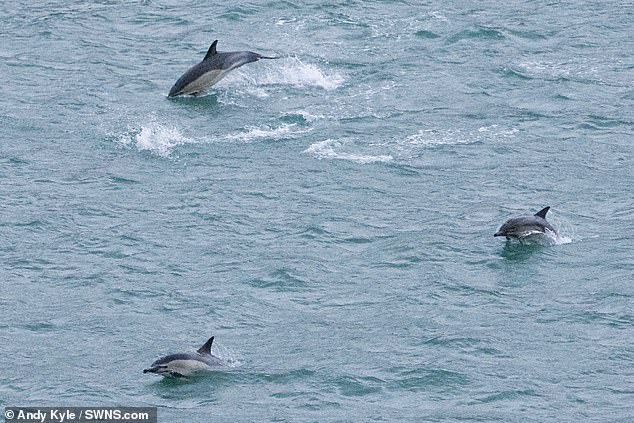 The day after a dolphin was found dead, a large number of the mammals were seen swimming around in the harbour. Mr Kyle said he usually only sees around one at a time

Mr Kyle said that, in almost 20 years of living in the seaside village, he has never once seen more than one dolphin in the harbour at any one time.

He said: ‘It’s too much of a coincidence that the pod would come in just 12 hours after the death of the other dolphin.

‘It’s blindingly obvious that the two things are probably connected.

‘Dolphins are meant to be very clever creatures. They may well have come to the harbour together on Saturday and lost one of their pod,’ he added.

Mr Kyle, whose house overlooks the harbour at Kingswear, said it all began on Saturday at around 2pm, when he saw ‘some activity’ on the slipway leading down into the water.

He said: ‘The local harbour patrol came and took away the dead dolphin on a boat.

‘It was very unusual – in 20 years of living here, I have never seen or heard of a dolphin being washed up.

‘Then at about 9am on Sunday morning, I had a call from a friend saying there was a whole pod of dolphins in the harbour.

‘It’s unheard of to see a pod of dolphins in the river here,’ Andy added.

‘Up until about four years ago, we would have one dolphin come and visit the harbour each summer – but I have never once seen more than one dolphin at any one time.’ 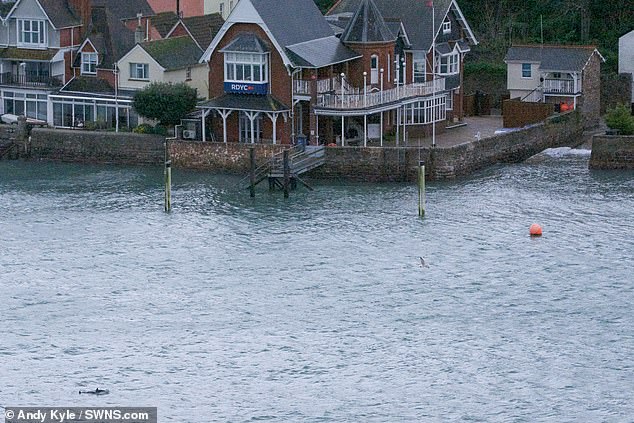 Mr Kyle stopped to photograph the dolphin’s ‘playful’ behaviour for around 45 minutes, before the pod ventured back out to sea.

He said: ‘They were spread over quite a large distance of the river – but groups of them kept swimming past the exact slipway where the dead dolphin was found the day before.

‘To me, the dolphin that died looked like a baby. The idea that they were coming back to look for it is very sweet. It was very moving.’

A spokesman for the charity Orca, that focuses on the protection of whales and dolphins, said that Mr Kyle’s theory about the reason for the dolphin’s presence was credible.

Nasa is ‘struggling’ and unlikely to make its 2024 Artemis mission to the moon, new audit says

What does the world smell like? After so long in a mask, I can barely remember | Arwa Mahdawi