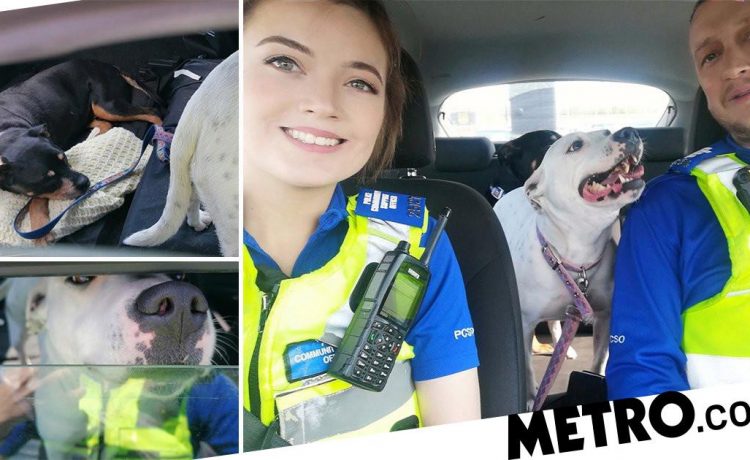 Two dogs had to be rescued from a hot car by police on Saturday, after their owners left them unattended to go shopping.

The pair had been locked inside a four by four in Staffordshire without any water and only a window left slightly open, officers said.

It is unclear who the dogs owners are or if they have since been reunited with their pets following the incident in Cannock, where a multi-million pound shopping centre opened on Monday.

The dogs were taken to a nearby police station amid fears that they were dehydrated and could be overheated.

Leaving dogs in cars on warm days is widely documented to be dangerous for the animals’ health.

Staffordshire Police officers say they managed to get to the two dogs without damaging the car, before posting photos on social media of the pair happily sat in the back of a police car.

The pets were rescued from the car park of the £160m McArthurGlen shopping village.

Cannock Police explained: ‘Another example of dogs being left in a vehicle parked at the new outlet, on a hot day in Cannock…without any access to water.

‘If you want to know how hot it gets in the car with a window cracked open and the engine off… you can try sitting in the car yourself.’

The statement continued: ‘We’ve managed to pop the door open without damage, and these very hot & thirsty dogs have been taken to Cannock Police Station, should the owner wish to collect them.

‘It goes without saying the RSPCA will be informed.’


MORE : Dogs getting fat in lockdown with London pets putting on most weight