Dog owner, 63, dies after being LICKED by his pet

Dog owner dies after being LICKED by his pet: Healthy 63-year-old caught deadly infection from his animal’s saliva

A man who became ill after being licked by his dog later died after catching a rare infection from his pet’s saliva.

The unidentified 63-year-old was completely healthy before being struck down with the devastating disease, doctors said.

He spent more than two weeks suffering in hospital with a catalogue of conditions including pneumonia, gangrene and a fever of 41°C (106°F).

The man had been infected with Capnocytophaga canimorsus, a bacteria which is normally transmitted by bites – but can be spread through just a lick. 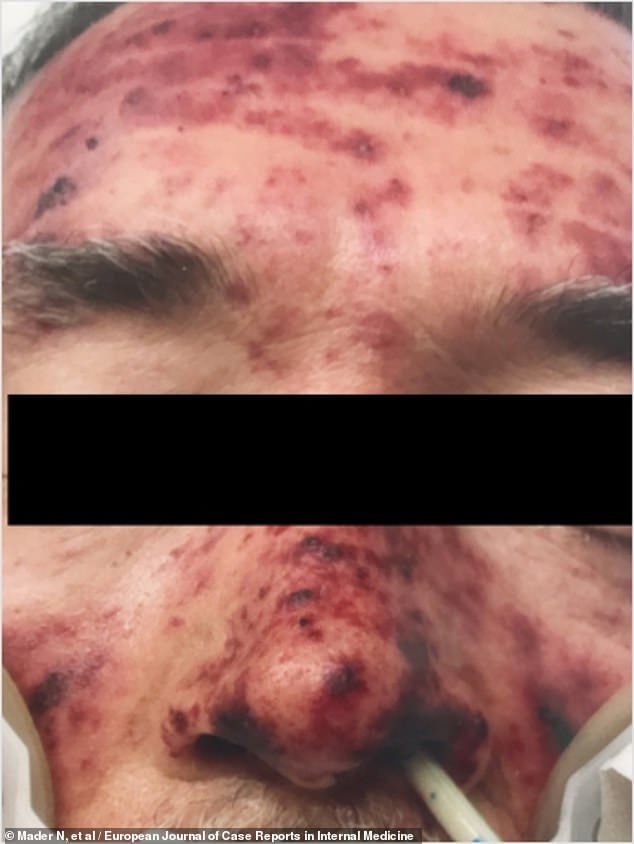 The man developed blisters across his entire head and body and got an infection which caused blood to clot deep inside his body and trigger rotting of the skin (Pictured: The patient still alive a few days after being admitted to hospital)

When the man first went to hospital he had had flu-like symptoms for three days, a fever and laboured breathing.

His tragic case was reported in a medical journal by doctors from the Rote Kreuz Krankenhaus in Bremen, Germany.

By the time he started medical treatment the man already had severe sepsis, the doctors, said and needed intensive care to try and save his life.

READ  Coronavirus crisis could cause a loneliness epidemic in older adults

In the first four days while he was in hospital his condition got significantly worse, beginning with a rash on his face and nerve pain and bruises in his legs.

This then progressed to his kidneys and liver shutting down and blood clotting in his blood vessels, starting to rot his skin away, and leading to a cardiac arrest.

He was resuscitated after his heart stopped and put onto life support but doctors still faced an uphill battle to save his life.

The C. canimorsus infection he suffered from is most often triggered by bites, the doctors said.

They were surprised it happened after licking alone, which probably only transmitted small numbers of bacteria.

The bug is rare and, according to one study in the Netherlands, affects only one in every 1.5million people. It is fatal in around 28 to 31 per cent of cases.

Normally, the doctors added, only people with weakened immune systems were seriously affected by the bacteria but this case showed it can happen to anyone.

The man did not even have an open wound to begin with, which they said could have explained the more serious illness.

The team, led by Dr Naomi Mader, wrote: ‘Pet owners with flu-like symptoms should urgently seek medical advice when their symptoms exceed those of a simple viral infection, which in this case were [breathing problems and rash]. 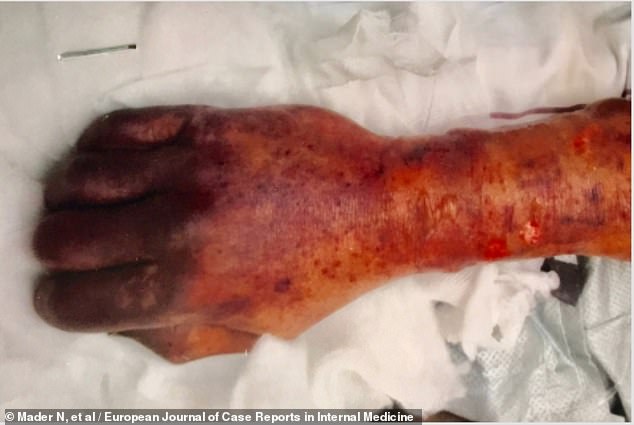 Gangrene developed in the man’s hands and feet and he sprouted blisters from head to toe, doctors said – they turned off his life support after he spent around two weeks in intensive care (Pictured: Gangrene and blisters beginning to develop on the man’s arm after about a week in hospital – he was still alive at the time of the photo)

‘Physicians confronted with such patients should ask about contact with dogs and cats.’

After the man’s cardiac arrest he was kept on life support but rapidly deteriorated.

He developed a fungal infection in his lungs, which led to suspected pneumonia; blisters over his entire body and gangrene in his fingers and toes; and caught MRSA.

Scans of his brain revealed he had a massive build-up of fluid in his brain, which was causing permanent damage to the organ.

Because of this and multiple organs failing, doctors and his family stopped the life support and the man died 16 days after being admitted to hospital.

The case report was published in the European Journal of Case Reports in Internal Medicine.

WHAT IS THE DEADLY BACTERIA FOUND IN DOGS’ SALIVA?

Capnocytophaga Canimorsus, a bacterial pathogen, is typically found in the saliva of cats and dogs.

It has the rare ability to cause disease in healthy individuals but has been known to cause severe illness in people with pre-existing conditions or compromised immune system.

The bacteria’s transmission can occur through bites, licks or even close proximity to the animals.

Symptoms usually appear within one to eight days of exposure, but mostly on the second day. They can range from flu-like symptoms to sepsis.

Infection can usually be treated effectively with antibiotics and is recommended for a minimum of three weeks.

But there can be long-term side effects include amputation from gangrene, heart attack, and kidney failure.

The faster the infection is diagnosed the better the chance of survival. About 30 percent of all those infected die.

Stomach bloating warning: The easily overlooked dietary decision that could be to blame