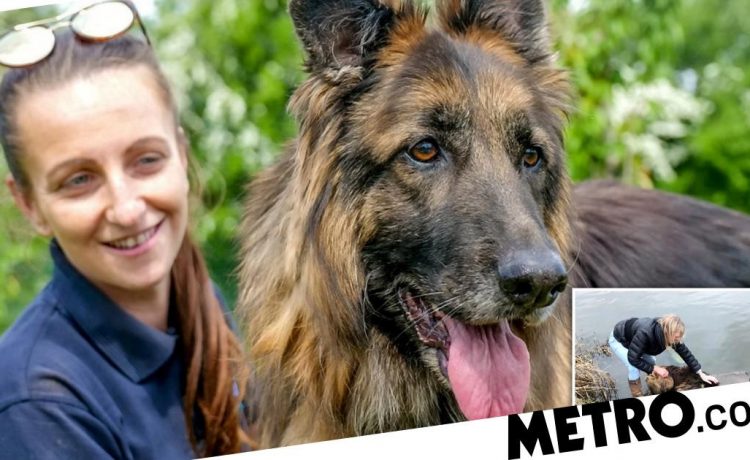 A dog that was tied to a massive rock and hurled into a freezing river has found her ‘forever home’ with a new family.

Bella was saved by heroic passer-by Jane Harper who found the Belgian Shepherd up to her neck in water and bravely leapt into the River Trent.

The dog was taken to a vet for emergency treatment and went on to make a remarkable recovery in the care of the RSPCA.

After 15 months of rehab, the 11-year-old dog has found a new home in South Derbyshire with Maggie Mellish and Charlie Douglas.

Maggie, 79, said: ‘We’ve had three Shepherd-type dogs over the last 30 years and really love them.

‘We lost our rescue dog two years ago and my daughter’s dog this year. We did really miss them.

‘Then we saw Bella’s story in the press a few weeks ago and the fact she needed a home, so my daughter encouraged us to apply for her.

‘We know she will need regular vet appointments and are willing to finance those.

‘We know she is in her older years but we just want to offer her a loving home she so deserves after all she has been through.’

The couple went to enjoy some time with Bella on Wednesday at the centre which has cared for her.

Bella’s rescuers, Ms Harper and her friend Joanne Bellamy, were also invited along to Radcliffe Animal Centre in Nottingham to witness the happy occasion.

Jane said: ‘It is quite emotional seeing Bella as it brings back memories of that terrible day, but we are thrilled to see how she has been transformed by staff here at the RSPCA.

‘She looks like a different dog. Her coat is beautiful and she looks so happy and full of life.’

Bella was fortunate to survive her ordeal in the freezing cold water, and it was later discovered she had a range of complex health needs.

Ella Carpenter, manager at the centre, said: ‘This is the perfect happy ending to a story which started off so sad and there were real doubts if Bella could pull through after her terrible ordeal.

‘At times we thought she just wouldn’t make it, with her age and underlying health conditions all against her.

‘But Bella has fought every day, showing enviable strength and courage, not wanting to give up her fight to recover.’

She was disqualified from keeping dogs for three years and fined £80 at Nottingham Magistrates Court.

READ  Evolutionary backing found in analysis of mammalian vertebrae
Share on FacebookShare on TwitterShare on PinterestShare on Reddit
newsgrooveApril 1, 2021