And there were a further 5,257 hospital appointments for people who had been injured by dogs but did not need an operation.

Official figures from NHS Digital reveal the worst affected group are tots under the age of five.

Last year, there were 427 hospital consultations for babies and toddlers that needed plastic surgery after being bitten by a dog.

These included cases where wounds had to be stitched – as well as more serious skin grafts and cosmetic reconstruction.

Dangerous dogs have sparked a series of recent tragedies.

In September, mum-of-three Elayne Stanley, 44, was savaged when her two mastiffs turned on her at home.

Paramedics battled to save her but she died at the scene.

And nine-year-old Frankie MacRitchie was killed by a dog at a caravan park in Looe, Cornwall, in April.

Boy, 4, with suspected pneumonia sleeps on hospital floor due to lack of beds

READ  Lung cancer: Having this unusual symptom on your fingers could mean you are at risk

The animal, a seven-year-old bulldog-cross called Winston, was later put down.

A Dogs Trust spokesperson said children should never be left alone with a dog.
They said: “Dog bites can be extremely distressing and upsetting incidents, but it’s important to remember the majority of people do live harmoniously with their beloved pets.” 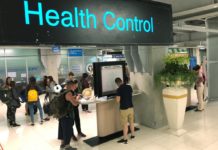 Cervical cancer could be eliminated in England, experts say

Cervical cancer is an avoidable disease – in theory, at least

Cervical cancer symptoms: The first noticeable sign of the deadly disease to watch out for