Doctor Sleep is the continuation of The Shining with an adult Dan Torrance (played by Ewan McGregor) battling his demons – plus battling a literal demon in the form of Rose The Hat (Rebecca Ferguson) as she tries to kill young Abra Stone (Kyliegh Curran) to steal her ‘shine.’ The filmmakers have painstakingly recreated scenes from the original The Shining – but some scenes are even closer to home.

Stanley Kubrick’s 1980 horror classic has become one of the best-loved horror films on the planet, with various versions released all over the world.

But now fans are champing at the bit to see how the makers of Doctor Sleep recreated the Overlook Hotel – the terrifying home of grisly ghouls who terrified young Danny.

In Doctor Sleep, an adult Dan realises that the only way to beat Rose The Hat is to take her to the Overlook, hoping the demons of his past will overcome her and save young Abra.

However, it turns out the filmmakers not only used Kubrick’s blueprint to recreate the hotel in incredible detail, but they also went one step further.

Speaking at a Q&A, director Mike Flanagan revealed the team, thanks to the Kubrick estate, were able to use actual footage from The Shining in Doctor Sleep.

The first shot which was used was the well-known moment when blood escapes from an opening elevator.

However, the Kubrick version of this shot was only used for a teaser trailer.

READ  Netflix’s ‘The King’ star and director reveal the dangerous real conditions that made for one of the most realistic on-screen battles, ever

But in the movie itself there are three shots which are taken from the original movie.

The director said: “There are three shots in the film which are actually Stanley Kubrick’s footage that have been altered.

His producer, Trevor Macy, said the reason these were used is because the footage is “absolutely impossible to create.”

Flanagan agreed and added: “We had wanted it very much that Dan would have to follow in his father’s footsteps and we wanted that to be literally true in the case of those three shots…

“Those are the only ones which are not full physical recreations.”

As for the rest of the film, the crew worked incredibly hard to try to get every detail right.

But it turns out this is impossible as Kubrick’s genius did not allow for an exact copy.

Flanagan said: “Warner Bros had all of his [Kubrick’s] blueprints and design elements and they gave them to us.

“The interesting thing was he didn’t always follow his own plan, so when we were down the road building this we were like, ‘This isn’t what it was like in the movie.’”

Flanagan explained how the crew went to “forensic film school” in trying to recreate shots, but even aspects of the furniture were proving difficult to recreate.

He added: “We didn’t get them all right – we tried but it’s really hard to do, it’s very sad.

“We were up against things like, ‘Ph the light fixtures he put in the bathroom in Room 237 are not manufactured anymore,’ or we would find they would be too small.

A snowy drive by The Overlook Hotel in The Shining (Image: Warner Bros)

“We had a few things where we couldn’t find out the exact dimensions of the chandeliers in one room so we had to do our best guess from the film.”

However, according to Flanagan, even some of the items used by Kubrick seemed to change throughout the film, and with different versions of the films available now, sometimes carpets, wallpaper and other elements look different in different versions.

He said: “We also bumped into a couple of those Kubrickian hiccups… we talked about the typewriter in the Colorado Lounge and the question was, ‘What colour is it?’

“Kubrick had multiple answers for that – the typewriter changes colour throughout The Shining.

The makers of Doctor Sleep were painstaking in their recreation of The Shining (Image: Warner Bros)

“We had it for one scene so the question was, ‘How do you remember it?’

“When presented with a contradiction of which there were many and Kubrick was not afraid of at all, we made a decision based on how we who love the film remember it most, in the hope that while it may not be completely accurate, it would be close enough to hopefully the way you remember the film.

READ  ‘Detective Pikachu’ is the ‘Citizen Kane’ of Pokémon Movies

“But I guarantee you didn’t get everything right. It’s impossible.”

Doctor Sleep is in cinemas on October 31 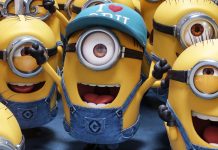