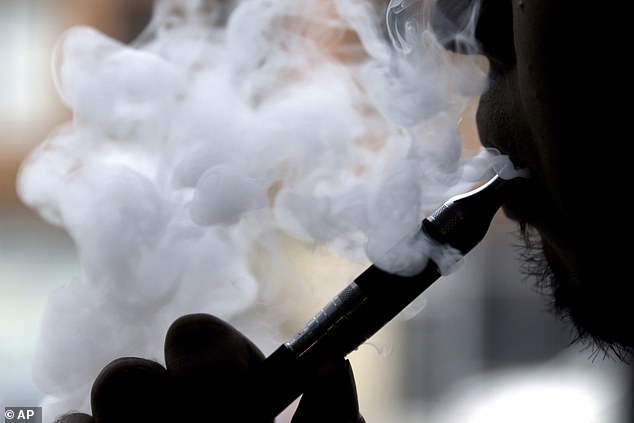 Do NOT vape bootleg e-liquids, CDC warns as it reveals 215 Americans have severe damage linked to e-cigarettes

The Centers for Disease Control and Prevention (CDC) are warning against using counterfeit and bootleg e-cigarette cartridges and liquid, the agencies said on Friday.

Although the CDC is still investigating the 215 reported cases of severe lung illnesses, it issued guidance Friday in the hope of protecting more Americans from the mysterious respiratory symptoms linked to at least one death.

The preliminary report notes that many – but not all – of the illnesses involved counterfeit e-liquid products, some of which contained THC, the psychoactive component of marijuana.

It isn’t clear yet what ingredient in e-cigarette vapor might be causing the vaping illnesses, but the CDC warns that bootleg ones are ‘not intended’ to be used with e-cig devices.

215 cases of severe lung illnesses linked to vaping have been reported to the CDC, which warned Friday against using bootleg or street-bought e-cigarette pods or liquids (file)

They also warned that no pregnant women, youth, young adults or anyone who doesn’t already use other tobacco products should not use e-cigarettes.

As of August 27, the health agencies say there are 215 people in 25 who vape and have shown up to hospitals symptoms that mimic severe pneumonia and even lung failure.

Some have been placed on life support or into medically-induced comas, and one death is suspected to have been caused by the vaping-linked illness.

But at this stage, the CDC can’t say what – if anything – in e-cigarettes vapors is doing life-threatening damage to Americans.

‘Even though cases appear similar, it is not clear if these cases have a common cause or if they are different diseases with similar presentations, which is why our ongoing investigation is critical,’ the CDC and FDA said in their statement.

Whether or not proper testing was done, it’s safe to say that using bootleg e-liquids could have unforeseen negative health effects, hence health officials’ broad warning against these products.

Juul, too, is trying to combat counterfeiters.

READ  Without my work and family, volunteering helped me through lockdown

Juul has filed a number of International Trade Commission actions and complaints against bootleggers that continue selling sweet look-alike pods.

Some of these bootleg pods contain THC or other cannabinoids, which have been detected in some lung illnesses.

The CDC is testing these ingredients and instructing doctors to ask their patients where they got their liquids and devices.