Disintegration "bigger than just this one game", says Halo co-creator 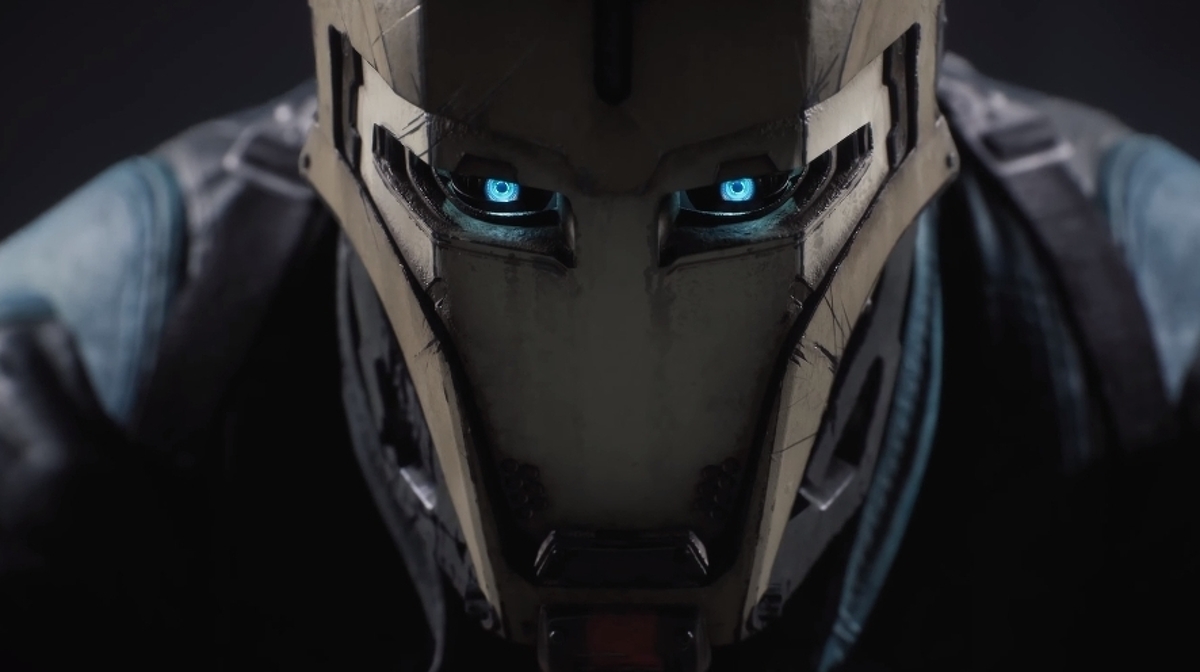 In its very first teaser trailer, it was hard to tell exactly what Disintegration was about. Showcasing a shiny levitating vehicle, my mind immediately jumped to pod-racing, and I assumed the game would be a fairly light-hearted shooter with some cool technology.

Yet after the announcement trailer shown earlier this week, I think it’s safe to say Disintegration isn’t all fun and games. While the multiplayer looks like it’ll remain colourful and irreverent, Disintegration’s set in a decidedly dark sci-fi universe: and there are some intriguing themes underpinning the game’s narrative setting. If you thought Cyberpunk 2077 was the only major title touching on transhumanism next year, do I have news for you.

At this year’s Gamescom, I got the chance to go hands-on with Disintegration’s multiplayer mode, learn a bit about the story, and also ask V1 president and game director Marcus Lehto (of Halo fame) some questions about the sci-fi world of Disintegration. Which, according to Lehto, could go way beyond just this one title.

Firstly, what’s going on with the story here? Who are we angry with? Why does everyone look like Cayde?

If you want to understand Disintegration’s setting, simply close your eyes and think of a future where overpopulation, disease, and a global pandemic nearly wipe out humanity. Maybe it doesn’t take much imagining.

In the bleak future presented by Disintegration, humans have bought themselves some bonus survival time by “integrating” themselves into robot bodies: basically, transplanting their brains. This was intended as a stop-gap measure to allow humans to return to their organic forms, but unfortunately some had other ideas. Those ideas being that living as a powerful machine is far better than withering away in a human body, and that integration is the true evolutionary end-point for humanity. Known as the Rayonne, the group splintered off and started messing with the process of integration, discovering it’s also possible to remove peoples’ sense of self and effectively turn them into hive-mind machines. This eventually provoked a global war between the Rayonne and just about everyone else: with the Rayonne forcing organic humans to integrate, and then wiping out any integrated people who resisted.

This, of course, is where the player comes in. Taking on the role of Roamer, the campaign centers around several “outlaws”: a bunch of regular people who integrated to avoid disease, and now must fight to save humanity. Using a levitating vehicle called a Gravcycle, you can command fellow outlaw units from the air, with the combination of you and your team members forming a customisable “crew”.

While cyborgs obviously aren’t a new topic for big sci-fi games (hello Destiny), Disintegration’s narrative does seem more grounded in our own reality, with a story based on very real threats to humanity’s survival (just check out this cheerful April 2019 UN report on the antimicrobial resistance crisis). It’s a promising narrative setting, but perhaps this isn’t a surprise given the director’s background. As one of the first people on the Halo project as both an art director and creative director, Lehto knows how to design a sci-fi world.

“It’s kind of my style – that’s what I love doing and what I love making,” Lehto said regarding his Halo background. “When I started out making Disintegration, it followed suit with a lot of the ideals and aesthetics I strongly believed in as far as making characters that are as iconic and readable as possible when it comes to just playing the game. When it comes to the overall art style of the game, I’m intrigued with players understanding how the look of them is informed by the friction of the world. I’m hoping they feel like it’s a believable world, one that could possibly exist.”

Even in its early stages, it’s clear Disintegration’s version of Earth is some kind of sci-fi dystopia, one which touches on topics such as transhumanism. According to Lehto, these themes form the core underlying themes of Disintegration’s sci-fi world – and he hinted that the setting is strong enough to form the basis of a wider franchise.

“It’s what I started working on over six years ago, when I started coming up with the foundation for this world,” Lehto explained. “It’s really looking at what happens when we rely too much on technology and allow it to run rampant, to the point where we take these things to a potential logical conclusion of what might happen, and then take that to extremes and play with that creatively, to see what might be fun for a game.

“That’s when I got real excited about the potential that this game had – not only from a fictional standpoint, but from the world we can build with it: that is much bigger than just this one game. But also the creative things that we can do with it, not only for the campaign, but also for multiplayer.”

The multiplayer side of Disintegration, of course, was actually playable at Gamescom – and I was able to try a couple of rounds of an attack/defence mode called Retrieval. Two 5v5 teams must take it in turns to score points, a process which involves moving cores to launchpads, in a dense map that funnels players into several lanes.

As a fusion of FPS with real-time tactics, players are able to simultaneously shoot enemies while commanding units on the ground – something that initially confused me, but surprisingly began to click after just two games. I started using the boost to quickly dart behind corners to avoid incoming fire, and frequently re-positioned my units using the command pulse (think Apex Legends ping) to ensure they didn’t get obliterated. I’d pick my moments for when to use my heavy weapon as opposed to my light, while also experimenting with my crew choice and different abilities.

Each themed crew comes with a unique combination of units, weapons and varying Gravcycle stats such as durability, handling and speed – along with special abilities such as healing. Naturally, you can use your choice of crew tactically: the chonkier crews such as Warhedz are handy when it comes to defence – but you might want to pick a nippier crew like Tech Noir to grab cores quickly on the attack.

It’s clear there’s some real depth to the mechanics here – ones which will be masterable after repetitive play – and the potential for some coordinated team attacks using the various abilities on display. It frequently reminded me of Team Fortress 2, except with… er, floating bikes and X-COM units. If there’s one niggle so far, it’s that I would have liked more extreme movement (both speed and height) with the Gravcycles, which sometimes feel a little cumbersome – although I expect this is a deliberate design decision to push players together and make it easier to shoot. Perhaps it’s best to think of them more as beefy motherships than podracers.

I was, however, pleasantly surprised at how quickly I got to grips with what seemed like a complicated gameplay system. I asked Lehto if merging shooter and RTS mechanics had always been the intention, and to explain some of the design decisions which make that possible.

“That was one of the biggest challenges we had when we made this game,” Lehto said. “The game actually started as a real-time strategy game – just straight out RTS – and we were like ‘man there’s way too many like this out there’. So we decided to add a first-person shooter mechanic into it, by turning the player into an active participant in combat.

“When we made the decision to add such a strong first-person shooter mechanic into it, but allow the player to tactically use that ground squad as part of their crew, we had to invent brand-new ways to engage with it. I wanted it to be in-keeping with that first-person mechanic so it felt fluent and it felt natural; to be able to fire down a command pulse on the ground, to tell your units to move to this location, and have them behave autonomously as a result.

“So there’s no micromanagement, and we don’t want to burden the player with that level of management. But you can issue commands with them, to use their abilities… and treat it like chess pieces, so you can do some really cool stuff with them not only in multiplayer, but even in campaign. You’ll be given a different set of ground units through every one of the missions, and a different Gravcycle with a different loadout as well. So you’ll be confronted with myriad different gameplay experiences and combat options.

“We had to make it in a way that wouldn’t overwhelm the player by giving them too much. But also, making it really unique in a way that is carving out a little niche in a gameplay space that’s not filled yet, so we’re really hoping this might fill that space and become something bigger.”

If you like the sound of the varied crew playstyles, there’s more where that came from: Lehto said V1 wants the crews to be “expandable”, with more added later on, and each crew designed to have a particular theme but a “loose” role in combat.

“We’re not pigeon-holing them into exactly being a healer class, or something like that,” he added. “They blend over one another, but if the players on the team actually choose a composition of different crews, properly together and they coordinate, they can really do some very interesting tactical gameplay together.”

In the meantime, V1 is already working on several other game modes for the multiplayer – including team deathmatch, and a “zone capture-type game mode”. Each of the modes will be set in different arena sizes designed to suit that particular game mode, and you can expect about three to be ready at launch. Like V1’s plans for crews, more game modes will be added later on “to really keep [the multiplayer] alive and healthy for the long-term”.

At this point, the discussion moved to multiplayer cosmetics – so I asked about V1’s monetisation plans, and how that’s going to work. The base game itself will cost about $49.99 (40.85), but players will also be able to customise their multiplayer crews with items such as skins, material swatches and Gravcycle attachments. Lehto said aesthetic upgrades will be available both through microtransactions and earnable in-game achievements, and promised that microtransactions will be cosmetic-only. And there will be no loot boxes, thank god.

So, all in all, Disintegration’s got a promising sci-fi setting to propel its campaign mode, a multiplayer with depth and unusual mechanics, and plans to support the title post-launch with more game modes and crews. Personally, I’m looking forward to seeing Disintegration’s take on transhumanism, as this setting seems ripe for discussions about what it means to be human, and how we define humanity. And, based on the recent trailer, humour in the face of a dark reality – something I’m all too familiar with in 2019.