The coronavirus has now spread to almost 70 countries around the world and health officials are scrambling to stop people spreading the virus among themselves.

But with many patients not realizing they’re ill, and others carrying on with normal life until they are diagnosed, the fast-spreading infection is proving difficult to contain.

Avoiding an infection with the virus, which causes a disease called COVID-19, may be as simple as sticking to usual good hygiene, according to scientists.

Wash your hands properly with soap and hot water 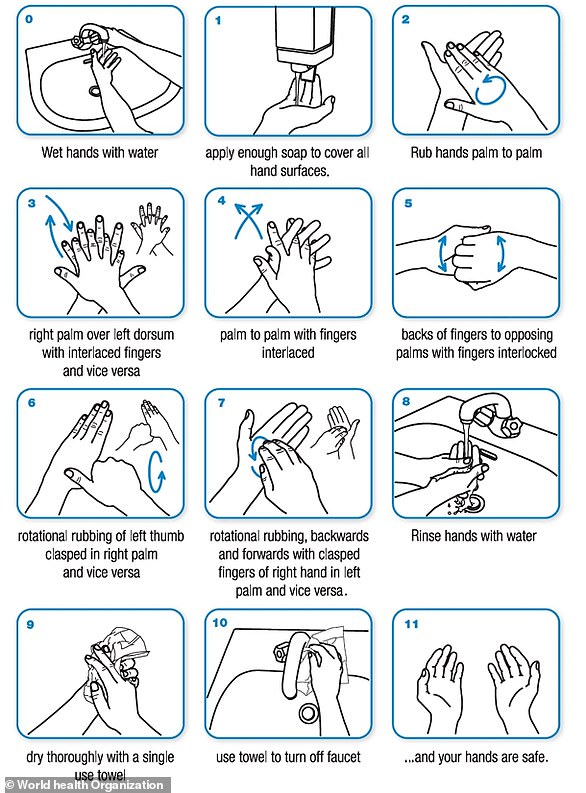 The World Health Organisation’s advice is for people to wash their hands at least five times a day with soap and water or hand sanitizer.

Friction, experts say, is the key to scrubbing off any signs of infection.

Proper hand-washing involves rubbing the palms together, rubbing the backs of the hands, interlocking fingers both backwards and forwards, scrubbing the thumbs and washing the fingertips.

People should clean their hands after coughing or sneezing; when looking after ill people; before, during and after preparing food or eating; after going to the toilet; after handling animals and whenever they look dirty.

‘Hands touch many surfaces and can pick up viruses,’ the WHO said in its official advice.

The French government has urged people to avoid ‘la bise’ – the traditional greeting of kissing someone on either cheek – and not to shake hands to reduce the spread of the virus.

Health minister Olivier Veran said: ‘The reduction in social contacts of a physical nature is advised. That includes the practice of the bise,’ Bloomberg reported.

The handshake is becoming a taboo greeting among workers, as employees and clients fear the spread of coronavirus in the workplace.

A motivational speaker and presentation coach has now devised the ‘air handshake’ because of the ‘unfolding coronavirus situation’.

Richard McCann hosted an event in Leeds on Saturday and later posted a video that showed him greeting a man with an air handshake.

Posting to his social media accounts, Mr McCann questioned whether was being paranoid for not shaking the hands of those attending his £300 per-ticket event. 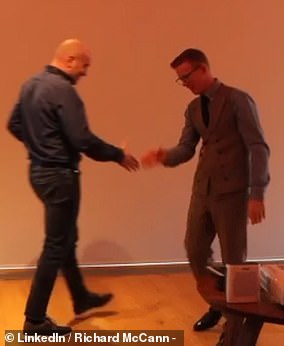 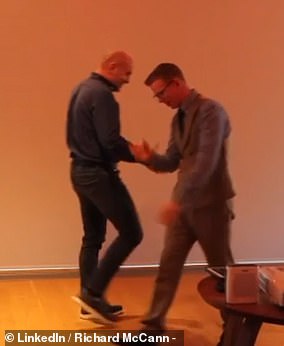 Experts say the most common way the coronavirus is thought to spread is by people touching surfaces which have been contaminated by an infected patient.

This works by somebody who has got the disease coughing or sneezing onto their hand, then touching a surface while they have the viruses on their hands. 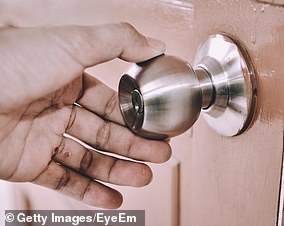 Günter Kampf of the University of Greifswald in Germany said disinfectants can kill the viruses but many things we touch every day on transport or in public buildings are not frequently disinfected.

The virus can live on hard surfaces which are touched by a lot of people for hours at a time, scientists say, with one study suggesting it could last for up to nine days.

For this reason, things like door knobs, should be considered a danger zone, as well as handrails on buses or trains.

Use a pen to push buttons instead of your fingers

Professor Kampf said that a lift was a particularly high risk place because everybody is trapped breathing the same air and having to press the same buttons. 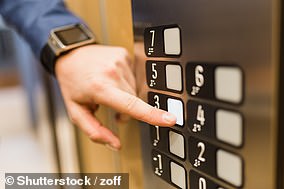 One tip he saw on social media suggested pushing lift buttons, which can also harbour viruses, with a pen rather than a finger.

Be careful what you touch in public toilets

Professor Kampf said: ‘The lifts and the public toilets, these are the places where I would be very, very careful about touching any surfaces to not risk a coronavirus infection.’

According to Alistair Miles, an Oxford University researcher, everyone should stop touching their faces. 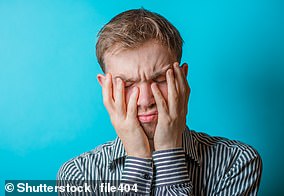 According to Alistair Miles, an Oxford University researcher, everyone should stop touching their faces

‘But if you start practicing now, you will quickly get a lot better at it.’

The viruses survive on surfaces and are picked up by the next person who touches it, who then touches their face and transfers the virus into their mouth, nose or eyes.

From there, the virus can enter your body and can make you sick.

Keeping people apart is one of the main ways governments can attempt to stop the spread of the virus – what officials call ‘social distancing measures’.

In Italy, France and Switzerland, for example, public gatherings of large groups of people – such as football matches – have been cancelled or banned.

Science writer Laurie Garrett, who travelled around China during the SARS outbreak in 2002/03, said her top piece of advice is to wear gloves in public.

Keep them on when using public transport or spending time in public spaces, she wrote in Foreign Policy, and when opening or closing doors. 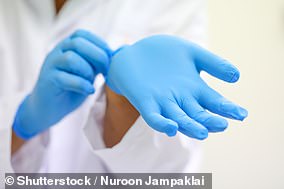 Science writer Laurie Garrett, who travelled around China during the SARS outbreak in 2002/03, said her top piece of advice is to wear gloves in public

She said: ‘If it’s possible to open and close doors using your elbows or shoulders, do so. Wear gloves to turn a doorknob — or wash your hands after touching it.

‘If anybody in your home takes sick, wash your doorknobs regularly.

‘Similarly, be cautious with stairway banisters, desktops, cell phones, toys, laptops — any objects that are hand-held.’

Don’t share towels and open windows in your house

Ms Garrett also recommends not sharing towels and opening windows at home, where possible, to ventilate the house.

This can also be done in cars, where people are in ‘close contact’, as defined by Public Health England – within six feet of someone for 15 minutes or more.

Catch coughs and sneezes and bin tissues straight away…

People should also cough or sneeze into a tissue, which they should bin immediately afterwards, and avoid spitting in public. 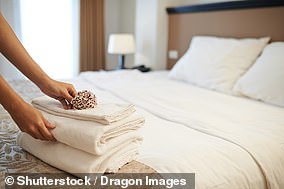 Ms Garrett also recommends not sharing towels and opening windows at home, where possible, to ventilate the house

… Or sneeze into your elbow

If they don’t have a tissue at hand, sneezing or coughing into the crease of the elbow is better than doing it onto hands.

Stand a few feet away from anyone who coughs or sneezes

‘When someone coughs or sneezes they spray small liquid droplets from their nose or mouth which may contain virus,’ the WHO says.

‘If you are too close, you can breathe in the droplets, including the COVID-19 virus if the person coughing has the disease.’ 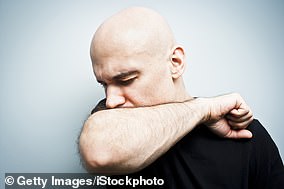 If they don’t have a tissue at hand, sneezing or coughing into the crease of the elbow is better than doing it onto hands

When an infected person coughs, sneezes, or simply talks, tiny droplets of moisture are expelled into the air, carrying the virus out of the body up to approximately seven feet.

Professor Wang Lin Fa, an infectious disease expert at Duke-NUS Medical School in Singapore, told Straits Times: ‘You have to be very unlucky to get it from the droplets in the air.

‘It means that the person coughed directly at your face, or very near you, or if an infected person coughed in the lift about 30 seconds before you went in.’

Although people have been pictured wearing them all over the world since the outbreak began, face masks are probably not any good at protecting people from catching COVID-19. 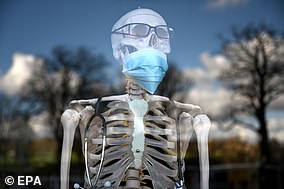 University of Reading scientist Dr Simon Clarke said individual viruses are so small they could pass through the filters on most masks people would buy from shops. Researchers tend to agree with this.

But scientists do also say anyone who is already infected could reduce their risk of passing the virus on by wearing a mask.

They may be able to block droplets carrying the virus from being coughed out into the air around them.

The virus infects someone by taking hold in flesh inside their airways and lungs after it is breathed in. Because of this, mucous and saliva contain the viruses and are infectious.