Derek Jeter is officially part of baseball’s 2020 Hall of Fame.

The news was announced on Wednesday, Jan. 22, and to celebrate the major career milestone, the former captain of the New York Yankees shared a video on The Players Tribune (which he helped found in 2014) of the moment he got the call that delivered the exciting news. And the black-and-white video shows a rarely seen family moment.

In the clip, the 45-year-old athlete sits with his wife, Hannah Jeter, his parents and his two young daughters, Bella Raine Jeter, 2, and Story Grey Jeter, 12 months, as he anxiously awaits the call. When his phone finally rings, Jack O’Connell of the Baseball Writers’ Association of America is on the other end with the happy news.

As O’Connell is heard saying, “I’m doing well, and you’re going to be doing well in about two seconds. Baseball writers have elected you to the Hall of Fame. Congratulations.”

A huge smile on his face, Jeter responds, “Jack, you know what? I always look forward to seeing you and hearing your voice, but for selfish reasons, your voice sounds a little bit better today.”

As O’Connell says back, “I told you five years ago I’d be making this call, and I kept my promise.”

At the end of the call, the entire family stands and hugs. Jeter picks up a crying Bella as he embraces his wife, Story and his parents, and then a sportscaster’s voice is heard honoring the retired baseball player.

“Today, Derek Jeter joins a distinguished list of Yankee greats in taking his rightful place in the Hall of Fame,” they say. “One of the most respected ball players of his generation, he opened his career as the American League Rookie of the Year in 1996, he went on to become a five-time World Series Champion. Derek, congratulations and welcome to Cooperstown. We’ll see you in July.”

Cooperstown is the town in New York in which the baseball Hall of Fame museum resides.

Jeter retired from the New York Yankees in 2014 after a storied career that included five World Series wins. And according to Sports Illustrated, 396 of the 397 ballots in this year’s Hall of Fame voting had Jeter’s name on it.

He married his wife (née Hannah Davis) in 2016, then little Bella was born in 2017. Story came along in 2019, and the family has maintained a fairly private life. But not today! 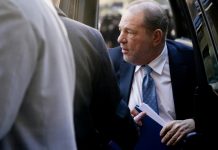 Weinstein jury renews deliberations after deadlock on most serious charges

BTS ask fans to avoid their shows over coronavirus fears