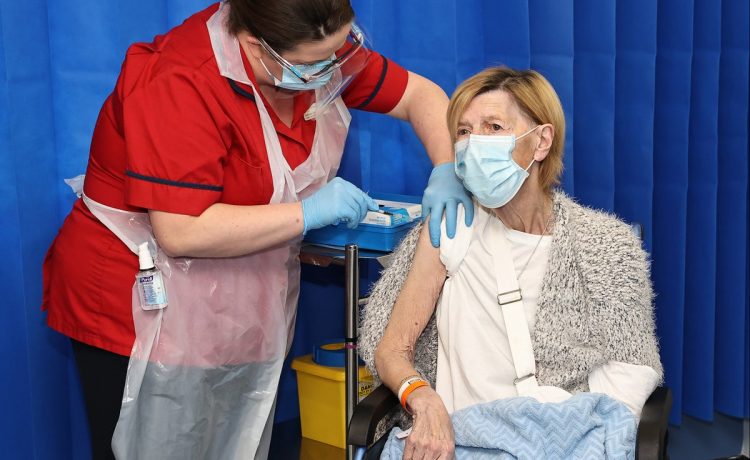 A first dose offers “substantial” protection, they said as they urged health service colleagues to back plans to delay second doses so more people can have their initial jab.

The leaders said they “strongly supported” the advice of the Joint Committee on Vaccination and Immunisation (JCVI).

The committee recommended that the focus should be on giving at-risk people the first dose of whichever vaccine they receive, rather than providing the required two doses in as short a time as possible.

They said they were “confident” that the first dose of both the Oxford-AstraZeneca and the Pfizer-BioNTech vaccines would provide “substantial” protection from the virus for two to three weeks.

Following the approval of the Oxford University vaccine, announced on Wednesday, a new dosing regimen was outlined, aimed at providing a speedier rollout. This means the second dose of both vaccines will be within 12 weeks of the first.

In their joint statement, the chief medical officers for England, Scotland, Wales and Northern Ireland said: “We recognise that the request to reschedule second appointments is operationally very difficult, especially at short notice, and will distress patients who were looking forward to being fully immunised.

“However, we are all conscious that for every 1,000 people boosted with a second dose of Covid-19 vaccine in January (who will as a result gain marginally on protection from severe disease), 1,000 new people can’t have substantial initial protection, which is in most cases likely to raise them from 0 per cent protected to at least 70 per cent protected.

READ  Type 2 diabetes: Do you have this painful mouth issue? It could be a symptom diabetes

“Whilst the NHS, through all of your work, has so far vaccinated over one million UK patients with a first dose, approximately 30 million UK patients and health and social care workers eligible for vaccination in phase one remain totally unprotected and many are distressed or anxious about the wait for their turn.

“These unvaccinated people are far more likely to end up severely ill, hospitalised, or in some cases dying without vaccine.

“Halving the number vaccinated over the next two-three months because of giving two vaccines in quick succession rather than with a delay of 12 weeks does not provide optimal public health impact.

“We have to follow public health principles and act at speed if we are to beat this pandemic which is running rampant in our communities, and we believe the public will understand and thank us for this decisive action. We hope this has your support.”

It comes as the Hospital Consultants and Specialists Association (HCSA) warned that the “ill thought-out” plan to delay the second dose would leave many vulnerable staff in limbo.

General secretary Paul Donaldson said: “While a planned and orderly deployment of the Oxford vaccination including longer timelines makes epidemiological sense, the decision to throw a spanner in the works of the existing Pfizer rollout appears simply bizarre unless there is an unknown hitch in supply.

“We are hearing that vulnerable hospital doctors at high risk from Covid have been told not to turn up for their second dose and therefore will not receive full protection.

“They are now left in limbo by a hastily formulated policy which seems extremely ill thought-out.”

Other healthcare experts have said the move to delay second doses will cause huge problems for thousands of partially vaccinated elderly and vulnerable people.

Richard Vautrey, chairman of the British Medical Association’s GP committee, said: “It is grossly and patently unfair to tens of thousands of our most at-risk patients to now try to reschedule their appointments.

“The decision to ask GPs, at such short notice, to rebook patients for three months hence will also cause huge logistical problems for almost all vaccination sites and practices.

“For example, to make contact with even just 2,000 elderly or vulnerable patients will take a team of five staff at a practice about a week, and that’s simply untenable.”

An NHS spokesperson said: “The MHRA (Medicines and Healthcare products Regulatory Agency), JCVI and UK chief medical officers have updated the second dose timing guidance which the NHS has to follow, so as to increase the number of vulnerable people protected against Covid over the next three months, potentially saving thousands of lives.

“The NHS immediately informed GPs on the day the revised instruction was given, with extra financial and logistical support now being provided to help ensure thousands more receive the vaccine quickly.”