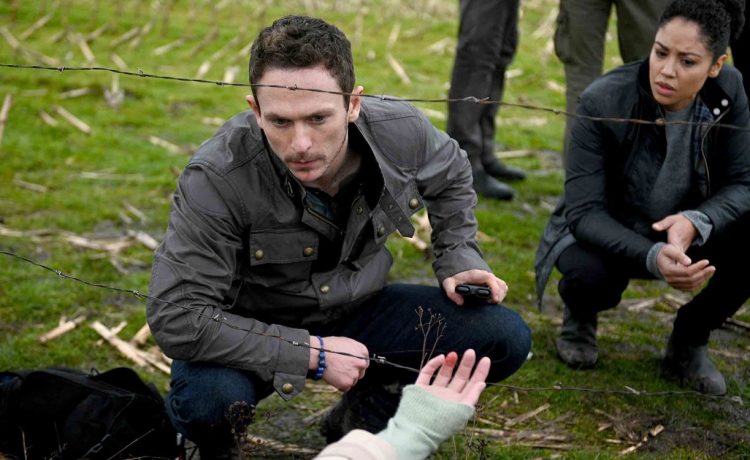 The pilot episode of Debris, a new sci-fi drama from NBC and Fringe executive producer J.H. Wyman, features a number of surprising moments… but only one genuinely unexpected twist. Kicking off with a combination of elements we’ve seen before — a male and female law enforcement team tasked with investigating the strange (a basic premise pioneered by The X-Files but one that has continually led to new iterations over the years) — here, we have CIA operative Bryan Beneventi (Jonathan Tucker) and MI6 operative Finola Jones (Riann Steele), technically agents for separate countries/agencies but working together to track the emergence of strange extraterrestrial objects that have fallen to Earth.

Because this is sci-fi TV with a decent budget, there are striking visuals involving swirling spinning bodies, the basic laws of physics turned on their heads, along with some intriguing mysteries that seem like they’ll be able to power at least 12 more episodes of drama. I was ready for those sorts of hijinks. But I wasn’t prepared for Debris to be so sad.

To be clear, the show is not humorless, with Tucker in particular bringing some spark and snark and intriguing facial hair to his scenes. But while much of what’s showcased in the pilot feels familiar enough to make overlooking this show possible, what does feel new is the strong strain of melancholy which ripples as an undercurrent throughout the entire episode. COVID-19 is not a factor in the Debris universe (so far, anyway), but there’s still a lot of loss packed into the pilot, and a key thread of this first installment is focused on the concept of connection, of looking outside ourselves for help.

RELATED: Jonathan Tucker on ‘Monsterland’ and His Hopes for a ‘Kingdom’ Revival

It’s hard to review this series on the basis of just one episode, but that undercurrent of grieving, a state of being for which there is no sci-fi fix, is something worth acknowledging. For months now — for nearly an entire year, in fact — creators have been floundering under the weight of the pandemic: The first hurdle, of course, was the basic act of trying to finish the shows that were in production before things shut down. But after that came the question of what to make next, especially since the question of what people actually want to watch during these unprecedented times remains unanswered to some degree.

Actually, that’s not entirely accurate — we have learned that the answer is not house-bound sitcoms and dramas filmed over Zoom (apologies to the canceled Connecting… and the unlikely-to-be-renewed Social Distance). Beyond that, the shows that seem to have really sparked for people are the ones that either transport audiences to different worlds and different eras (Bridgerton, The Queen’s Gambit, WandaVision, Emily in Paris) or… well… Ted Lasso, a show which takes place in contemporary times but is aggressively focused on the concept that empathy and comedy are not mutually exclusive.

Perhaps what this means is that our hearts are beating a little closer to the surface these days, and they require tender care, whether that be through the salves of escapism or basic kindness. “I know what grief can do to a person, how it makes you feel really alone,” Finola tells a young woman at one point in the Debris pilot. It’s a state of being that the families of over 500,000 Americans are currently coping with — no wonder stories about people in mourning are connecting with viewers in a whole new way.

Taken as a whole, Debris may ultimately struggle to soar beyond its most familiar and predictable components. But, at least based on the pilot, its best qualities may make it better suited for this moment right now than you’d expect.

Now’s your last chance to catch ‘Judas and the Black Messiah’ on streaming before the Oscars!