The 20th century gave the world some incredible rock stars and while many have since died, their legacy and stunning back catalogues live on. According to new research by Casino Grounds, David Bowie has topped the likes of Elvis Presley, Prince and John Lennon as the most listened to dead rock star on Spotify. The Ziggy Stardust legend who died in 2016, has 15,589,440 monthly listeners on the music streaming service.

Elvis Presley, the most successful solo artist of all time, wasn’t far behind with 13,066,145 monthly listens on Spotify.

Nevertheless, The King has 2.26 million YouTube subscribers to Bowie’s 1.23 million.

While Elvis’ most popular song on both platforms is Can’t Help Falling In Love from his 1961 movie Blue Hawaii and Bowie’s was Heroes.

Here’s the full Top 10 of the most listened to dead rock stars on Spotify.

READ MORE: Elvis: Priscilla shares why she was ‘nervous’ to leave King on his own

Bowie said at the time: “Look, hang on a minute, why don’t we write one of our own?”

Producer Reinhold Mack remembered: “Then there’s the pressure of his majesty, David, being there, and everybody wanted to look suave and quick with ideas and stuff.”

However, Roger shared: “And then we went for a pizza and he forgot it! Completely escaped his mind. We got back and I remembered it.” 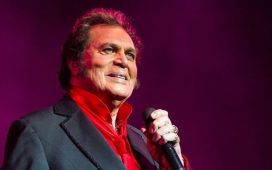