They regularly share snaps alongside their four children with their legions of fans on social media.

And David and Victoria Beckham enjoyed some quality time together as they enjoyed the summer sunshine on a country walk.

The former footballer, 45, uploaded a snap of the couple to his Instagram along with the caption: ‘Afternoon walk ♥️ @victoriabeckham’. 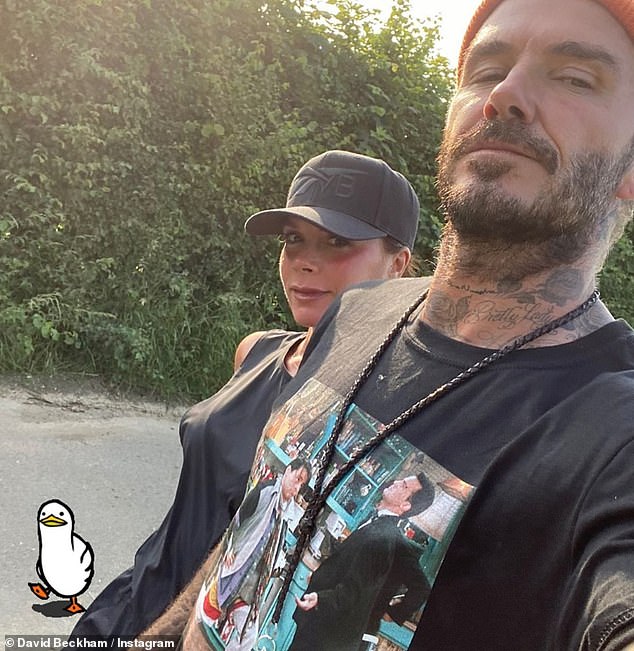 Couple: David, 45, and Victoria Beckham, 46, enjoyed some quality time together as they enjoyed the summer sunshine on a country walk

The pair were dressed casually for the outing with David sporting a black T-shirt with a print of Joey and Chandler from Friends.

He also wore a large rope-style necklace which Victoria poked fun at, commenting on the snap: ‘Nice necklace super bold!’ along with a series of laughing emojis.

Victoria, 46, also opted for a laid back look, sporting a black sleeveless top and a matching cap while she styled her locks into an updo.

It comes after the couple’s daughter Harper appeared to be following in David’s footsteps as she donned her football boots for a kickabout on Monday. 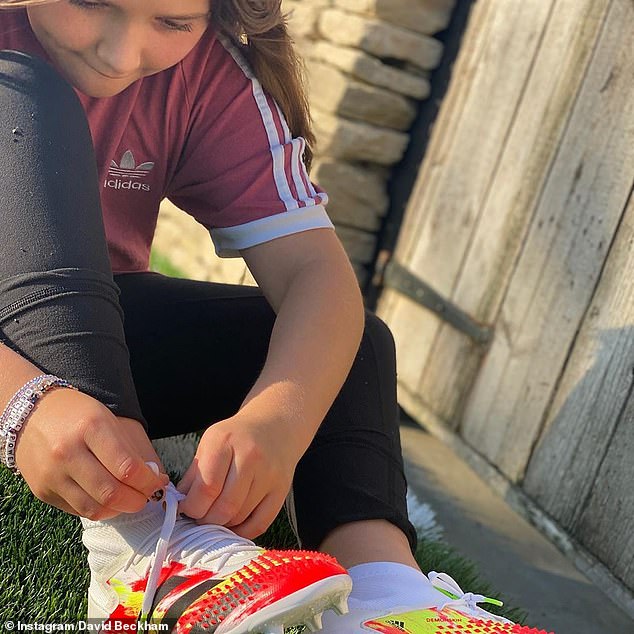 Taking after her father: Harper Beckham donned a pair of bright football boots for a kickabout on Monday

David shared the sweet snaps of his daughter, eight, on Instagram, captioning them: ‘Bend it like Harper (Beckham).’

The photos showed Harper, wearing an Adidas top and leggings, putting on her boots before she took to the pitch.

The youngster wore a bracelet with letters which read ‘girl power’, a phrase associated with the 1990s girl band. 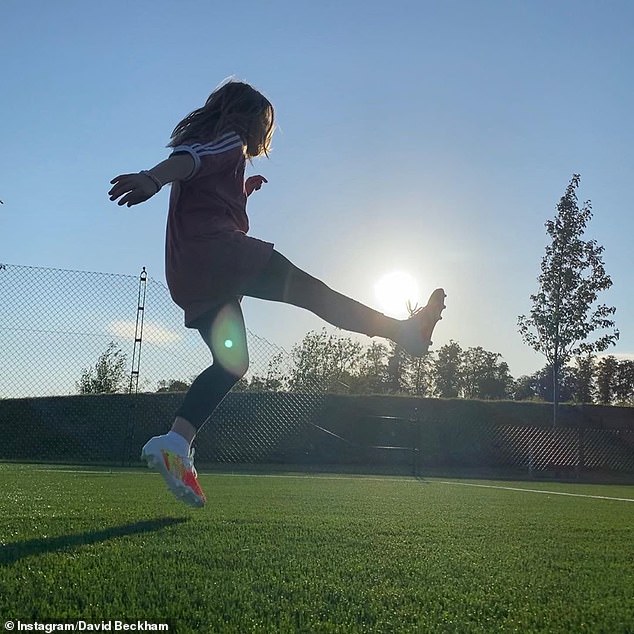 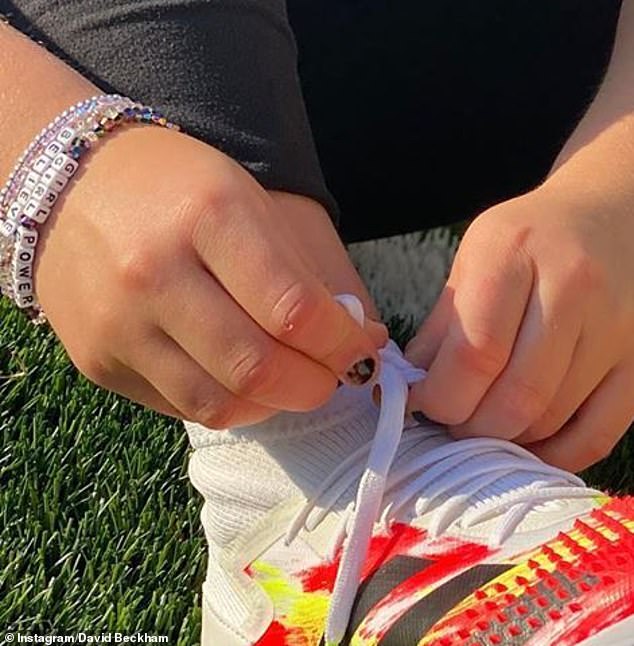 Not forgetting mum: Harper also had a nod to her former Spice Girl mother with a ‘Girl Power’ bracelet

The sweet post comes after Victoria revealed that Harper is copying her signature style as she posed in a pair of her over-sized sunglasses in an adorable Instagram snap on Saturday.

The singer and fashionista uploaded the picture showing Harper doing a sassy pose in oversized brown tortoiseshell sunglasses for her 28.3million followers.

She posted the sweet snap alongside the caption: ‘Happy weekend! Playing dress up in Mummy’s sunglasses.’ 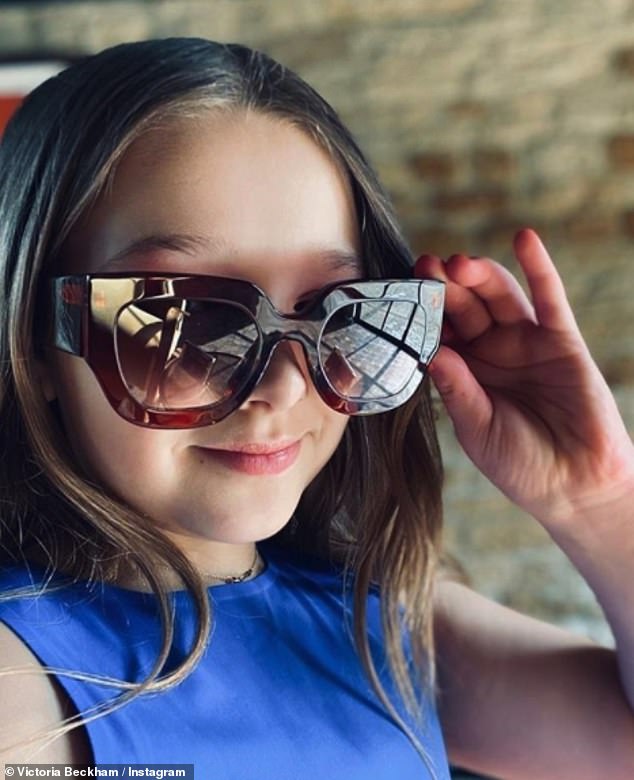 Adorable: Victoria revealed that her daughter, Harper, eight, is also getting back into the spirit as she posed in a pair of her mother’s oversized sunglasses on Saturday

Giving further insights into life in Beckham lockdown, on Tuesday, Victoria took to her Instagram Stories, to share a hilarious note penned by wrote showing she wasn’t too impressed with having to return to school.

The note read: ‘I do not like school. Can I do art instead?’

Uploading the message, which was written in neon pink on a magnetic glass board, the singer-turned-designer added the caption: ‘Note from Harper.’

Happy weekend: She posted the sweet snap alongside the caption: ‘Happy weekend! Playing dress up in Mummy’s sunglasses’ 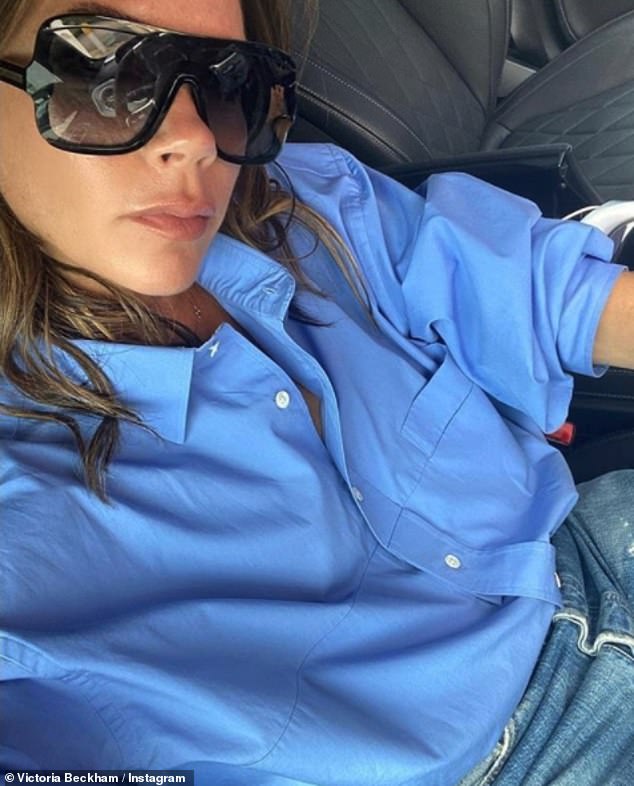 Express yourself: Victoria recently revealed that Harper was far from impressed with her school lessons on Tuesday, as she left the star a sassy note

Also on Tuesday, the star shared a video of herself dancing on a sun-drenched deck with her son Cruz as she donned a pair of short shorts and a baseball cap.

Victoria has been settling back into a new schedule this week, as she returned to work at her clothing store on London’s upscale Dover Street. 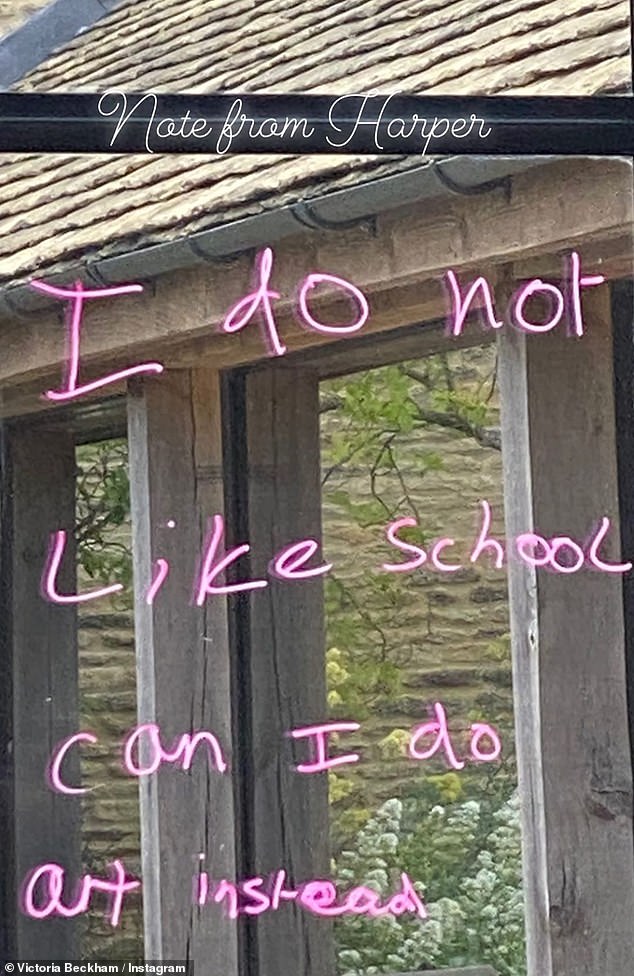 Where art thou: Taking to her Instagram Stories on Tuesday, the former Spice Girl shared the handwritten note in question, which read, ‘I do not like school. Can I do art instead’