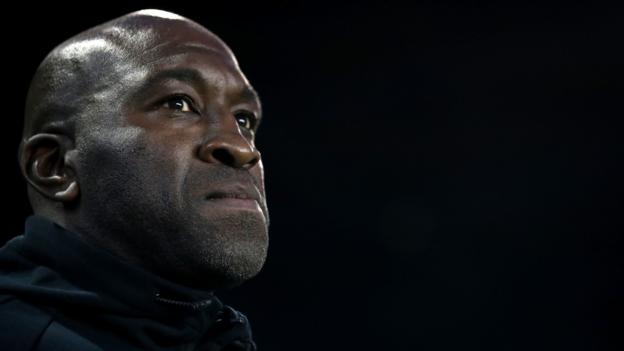 Moore, 44, was relieved of his duties after Saturday’s 1-1 draw with bottom club Ipswich left them nine points off the automatic promotion places.

“They’ve lost two games and drawn one against Ipswich, which they would expect to win,” Sneekes told BBC WM.

“Is that really form that warrants a sacking? I think it’s the easy option.”

Albion lost to promotion rivals Sheffield United and Leeds before the draw with Ipswich, and have failed to win at The Hawthorns in the league since Boxing Day.

“The home form hasn’t been good enough but they’ve won seven out of the past nine away games, and they’re still in touch,” added Sneekes, who made 253 appearances for the Baggies between 1996 and 2001.

“I’m shocked. I think it’s very harsh to sack somebody off the back of the last three games.”

BBC Sport understands that the club hope to have a replacement in for Wednesday’s home game against Swansea.

Former Fulham boss Slavisa Jokanovic and ex-Huddersfield manager David Wagner have been linked with the role, with both having won promotion from the Championship through the play-offs.

“Saying the new man might be in by Wednesday shows me that they’ve probably been talking to other people in the mean time,” said Sneekes.

“Apart from the last couple of games, I don’t think Darren Moore has done a lot wrong.”

“I was at The Hawthorns on Saturday (in his role as one of the club’s ambassadors) and it wasn’t great, coming off the back of the Leeds performance.

“There were a couple of little boos at the end, but nothing that asked the question ‘are we going to have to sack the manager?’

“They’ve got a young novice manager in there. They’ve given him the opportunity. He’s brought the club together and they’re fourth in the table.

“They could have been Stoke or Villa, with only an outside chance of making the play-offs. Albion look like they’re going to be in there. There was no need to panic.”