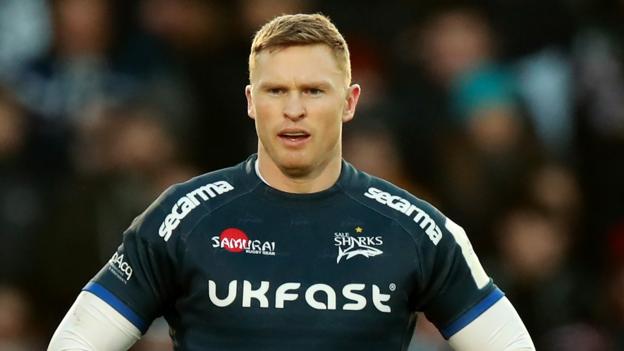 The 32-year-old spoke about his own mental health issues after former Love Island host Flack, 40, was found dead at her home in London having taken her own life.

‘Personal attacks’ on the day Monye’s wife had a miscarriage

For Monye, the main issue is that people do not know what is going on in players’ lives when they attack them on social media.

It is a situation the 36-year-old, who says he has had more abuse since starting work in the media than he used to get as a player, has personal experience of.

About four years ago, when his wife Lucy was seven weeks pregnant he was preparing to commentate on a Saracens game when he got a phone call from his sister-in-law.

“I had a feeling something was bad,” he says. “I answered the phone and Lucy had just started bleeding, she’d just started having a miscarriage.

“In that moment, I was devastated. I tried to block it out because I tried to get on and do a job. I commentated on the game, did my best to get through it.

“I went home to be with her. She was in bits. I was trying to be as positive as I could. I picked up my phone and some mentions I got that day were a personal attack on me.

“I thought it was unnecessary and they didn’t have a clue what was going on in my life then. The game I had just commentated on was so irrelevant. What makes them think they know me that they have the right to at me and call me whatever over a game?

Monye says the experience brought him “greater perspective” that “there is zero need for anyone to ever get personal”.

And he believes the policies of social media platforms “absolutely have to change” to avoid other people going through something similar.

“The governance of social media is so poor now, you can be faceless and cowardly, say whatever you want and there is zero retribution,” he adds.

“We want players to be accessible, but don’t abuse that privilege to go out and abuse people.

“The world was a far simpler and kinder place without social media. It is only a small percentage of people that ruin it for everyone.

“Unfortunately on social media those people’s voices are much louder than the ones who are really kind.”

Ashton says he struggles “to go anywhere near social media” now, comparing his feelings to a phobia, after having bad experiences with it in the past.

Around 2012, the year the 32-year-old moved from Northampton to Saracens, Ashton admits the amount of abuse left him “in a bad way”.

“I took so much abuse,” he explains. “Really bad stuff that if you flagged it up now people would go wild about it. Back then anyone could say what they wanted.

“They say, ‘I hope you die’ or ‘I’m going to fill you in when I see you’ or things about family. You’re just there to be attacked.

‘Awful comments on pictures of my family’

For Care, who is now involved in a mental health scheme for young players, a lot of abuse is related to “indiscretions” committed earlier in his rugby career.

In a three-month period starting at the end of 2011, the Quins back was arrested three times for drink-related offences.

“You put your hand up and apologise for it but people don’t forget those times you made a mistake,” he adds.

“For whatever good you can do on or off the pitch, there are still people who are only going to remember the bad stuff.

“To this day, I put up a nice picture of my family and someone will feel the need to comment on Instagram with something awful.”

The 33-year-old says such abuse used to have a greater impact on him, but now he deletes any negative comments and blocks the person who sent them.

“If you want to go looking for bad stuff about yourself you’re going to find it,” he says.

“When I was younger I read it and it affected me a lot more because I cared too much about what people thought about me. Being older and wiser, I know the people whose opinion I care about. But we’re not all the same.

“Every athlete or person in the limelight deals with it differently. Some people struggle with it a lot more but that is the way I deal with it.”

If you, or someone you know, have been affected by mental health issues, help and support is available at bbc.co.uk/actionline