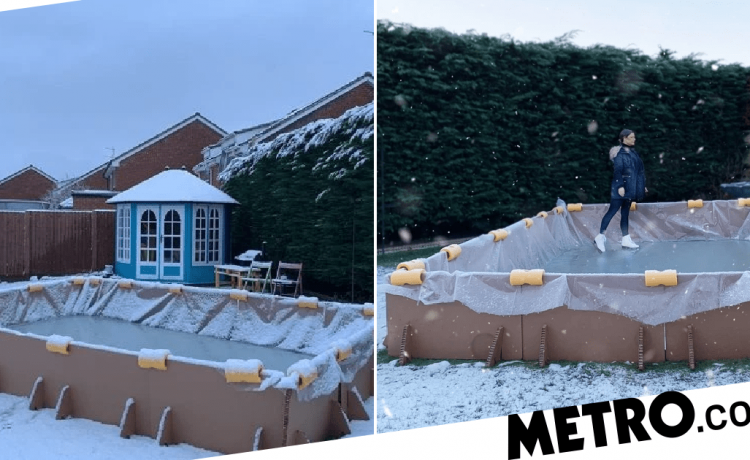 A Dancing on Ice super fan has taken her love for the show to a whole new level – by building her very own ice rink in her back garden during lockdown.

Polly Maclennan, who lives in Gloucester with her partner and works at home solutions specialist, BiGDUG, says she was inspired by her love of the reality show to make her own ice rink.

When the freezing cold weather descended on much of the UK recently, she saw it as the perfect excuse to get creative and bring her idea to life.

She used materials from her work to make the structure, and when her bosses say the creation, they decided to turn it into a Build-at-Home Ice Rink kit available to order online for around £600.

Speaking about her creation, 35-year-old Polly said: ‘I was sat on the sofa one Sunday watching Dancing On Ice, which was brilliant as always, and the idea really did just hit me.

‘I already knew BiGDUG had the things I needed to make my ice rink happen, so when the snow came I just went for it – and it worked!’

Similarly to building a pool, Polly used groundhooks, buffers, a mallet, and a rink liner to put the structure together, before filling it with water and waiting for the temperature to drop.

It did, and now Polly can skate to her heart’s content without the worry that she’ll fall into a frozen lake.

A spokesperson from the company said: ‘Polly is often coming up with weird and wonderful ideas and when she mentioned this one we loved it.

‘Being stuck at home with limited entertainment is something most of us can relate to at the moment, so we thought what better way to bring a little fun to day-to-day lockdown life than with a Build-at-Home Ice Rink kit.

‘It’s the perfect way to get outdoors and make the most of the weather without breaking restrictions – just don’t go trying the headbanger at home!’

With the weather in the UK being what it is, your rink should stay frozen for a while depending on where you are. If not… duck pond?

Tips on how to make your own ice rink

1. Pick your ice rink site – a flat area of the garden – and create the rink perimeter by choosing the number of side boards you need

2. Erect the sideboards and stabilise with ground hooks by piercing a hole near the bottom of the board and securing down into the grass with your feet

3. Lay down the rink liner over the boards and use the mallet to press the liner into the corners and along the edges of the side boards

4. Prepare and attach the rink buffers to the top of your side boards to make sure skaters are safe from bumping into the side of the rink

5. Fill with three inches of water then give the weather gods a night to work their magic!


MORE : Parrot too fat to fly after eating too many crisps slims down and soars again


MORE : What is your twin flame, and what’s sex like with them?

READ  Annabel Rivkin on the best tools for days-old hair
Share on FacebookShare on TwitterShare on PinterestShare on Reddit
newsgrooveJanuary 27, 2021