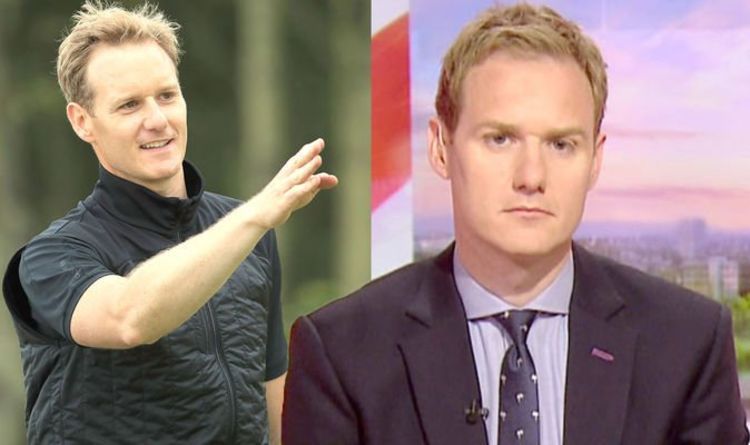 Dan Walker took to Instagram last night to update his 83,000 followers on how his week away from BBC Breakfast was going. The Football Focus star has been away from the morning show in Cornwall enjoying a break with his family. However, the 42-year-old ran into difficulty early on on his break in the UK, claiming where they were staying was “made for Bilbo Baggins”. His upload drew comments from both Eamonn Holmes and Danny Mills, after he was seen banging his head on the ceiling.

Dan, who is believed to be 6ft 4in, addressed his bathroom problem, leaving fans amused yesterday.

“Lovely week away with the family in Cornwall,” he wrote.

“Surfing, sunset barbecues, castles, cream teas, pasties and a toilet that was made for Bilbo Baggins.”

His accompanying shot saw him resting his forehead on the sloped wall above the toilet, with his arms outstretched in apparent annoyance.

He later added the same picture to his Instagram stories, simply asking: “Sit down wee?” with a crying with laughter emoji.

The latter This Morning presenter appeared to sympathise with his plight, saying: “Like airplane loos ! Limbo dancing.”

Fellow users also responded, with one quipping: “You will make a right mess – you left the lid down.”

Two others agreed: “Dan time to contemplate life with a sit down wee,” and: “Treat yourself to a sit down one!”

Dan is thought to have been enjoying his time off with wife Sarah Walker, who he wed back in 2001, and their children.

The couple are parents to three kids: Jessica, Susanna and son Chuck.

He later tweeted his 574,000 Twitter followers today: “Back on #FootballFocus today. Looking forward to this and loads more with @DionDublinsDube & @Osman21Leon.”

The star has hosted the football programme since 2009, and BBC Breakfast for the past three years after replacing Bill Turnbull.

Football Focus returns to BBC One at 12pm today, while BBC Breakfast continues tomorrow at 6am on the same channel.