The presenter told his Twitter followers that he had watched the new Lion King remake. But for millions of children and adults, one of film’s most iconic moments is also its most harrowing. The original saw Simba become king of Pride Rock and the new film was recently released starring the likes of Beyonce and Seth Rogan.

“I’ve seen the cartoon so many times but still the opening sequence gets me every time.

“Don’t even get me started on the stampede.”

One wrote: “I wept, and wept, it was so much more brutal in the new version.”

Another said: “I just watched it as well, I thought it was amazing!!”

The film’s premiere was attended by dozens of stars, including Prince Harry and wife Meghan Markle, the Duchess of Sussex.

Following the film, the couple announced they would begin a new initiative aimed at saving lions from going extinct.

Dan first took his place on the BBC Breakfast sofa as one of the main presenters after Bill Turnbull, 63, announced he was leaving following 15 years on the show.

In a recent interview with The Daily Mirror, Dan and Louise spoke out about their friendship.

Louise has claimed that they regularly help each other out of tight spots on air.

She said: “I think we’re both team players. 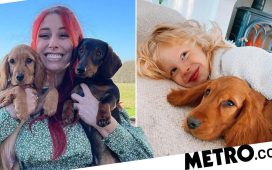