The British No 1, Dan Evans, is through to the second round of the Australian Open, but he had to come from two sets down before seeing off the world No 129 Mackenzie McDonald. It took the vastly improved Birmingham player three hours and 21 minutes to beat the one-time American prodigy, 3-6, 4-6, 6-1, 6-2, 6-3, on an outside court packed with vocal but nervous British fans.

Elsewhere, the first shock of the tournament saw the exit of the talented 13th seed Denis Shapovalov, the only player to threaten to walk off court if the air quality was considered hazardous (it was classed “near perfect” on Monday). Losing his composure under sustained pressure, he chose another route home to Canada when Marton Fucsovics, the world No 67, stayed cool to score a rare big win, 6-3, 6-7 (9), 6-1, 7-6 (3) on Margaret Court Arena.

Meanwhile on tiny Court 14, things looked grim for Evans when McDonald led 5-1 after half an hour. Serving for the first set, the American missed a routine smash on a second break point to allow Evans back into the fight.

Evans said beforehand rankings and seedings don’t count for much at this level, and McDonald, 97 places below him at 129, was proving him right. This was their first match on Tour and, returning from hamstring surgery seven months ago, the 24-year-old Californian looked determined to add to his relatively meagre career earnings of $1.2 million after four years on the fringes of the game.

Working behind a solid forehand, McDonald, who favours hardcourt, continued to torment Evans, breaking his tentative serve at the start of the second. Trailing a set and 1-3 on the hour, this had turned from a chore to a dogfight for favourite, who only a week ago was performing heroically for Great Britain in the ATP Cup in Sydney.

The good vibes from that inaugural tournament – where he beat the Australian hotshot, Alex de Minaur, in a thrilling three-setter – and then was handed a seeding in a slam for the first time, was draining away. He had a look on his opponent’s serve in the sixth game but McDonald, who went to the same high school as Brad Gilbert, Piedmont, showed heart to save two break points for a nervous hold and 4-2.

Evans had to fight hard for nearly every point to stay in the contest and, although his touch and precision were letting him down in key moments, he saved one set point before missing a lobbed winner by an inch in the 10th game . McDonald double-faulted on set point and handed Evans break point with a lazy backhand. The American had another chance to go two sets up, but dumped a below-the-volley.

Evans hit long to give up fifth set point, then saved with a superb backhand down the line to force a fifth deuce point, a passing crosscourt forehand for another break point. McDonald held his nerve, though, and after fighting through six deuce points, was glad to see Evans’s final low volley hit high on the net.

Evans was struggling to land four out of 10 first serves, and McDonald was eating his second attempt. At 5-1 down, Evans hit the ball out of court and shocked fans when he castigated himself, audibly, in straight-talking terms: “Get hold of it. Relax a bit. Settle down. Fucking do something.”

And he did. The noisy British contingent – including his Davis Cup captain, Leon Smith – finally had something to cheer when Evans came to life with a vengeance to go 5-0 up in the third. McDonald forced two deuce points on his serve to avoid the bagel, but shoved a closing backhand wide on set point. After two hours of struggle, Evans was finally in the contest, his self-belief returned and the shots began to flow.

An over-rule cost Evans a 3-0 advantage, but he kept his temper and his lead and, sending his opponent the wrong way on the baseline with a piercing forehand, levelled at two sets apiece.

The match had decidedly swung his way, but they traded on level terms until Evans won a long, high-grade rally on his way to breaking in the fifth game, and again for 5-2. He looked mightily relieved as he left the court, after signing quite a lot of autographs.

At the other end of the first-day draw, the Australian wildcard, Daniel Harris, could take only seven games off world No 8 Matteo Berrettini on Melbourne Arena. The fast-improving Italian is a serious dangerman.

Elsewhere in early matches, the defending women’s champion, Naomi Osaka, survived a second-set wobble to beat the Czech, Marie Bouzkova, 6-2, 6-4 in an hour and 20 minutes on Rod Laver.

Eyes remained fixed on the women’s draw on the main court as Serena Williams, looking as fit and trim as she has done for a long time, closed on Margaret Court’s 24-slam all-time record by one more match, belting a ninth ace in less than an hour to beat the Russian teenager, Anastasia Potapova, 6-0, 6-3.

READ  Should England give the World Cup to New Zealand?

Williams won her last major on this court three years ago when eight months pregnant. At 38, she will not get many more chances. “I think it helped my mojo winning a tournament [in New Zealand] coming here,” Williams said later. “It’s been quite awhile. But you both start from zero-zero. It’s not easy. I learned a lot from Mike Tyson in the off-season.” 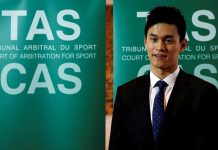 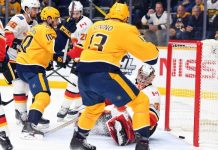