Dad spends £7,000 turning back garden into a professional football pitch 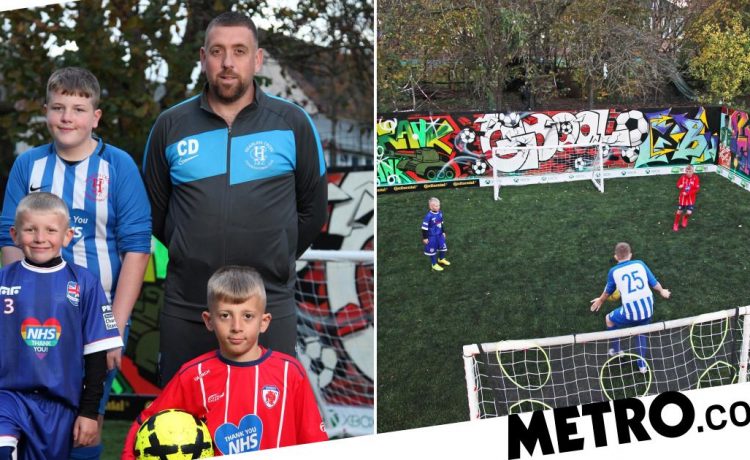 Whatever coronavirus restrictions they face, Carl Dooley’s kids can keep playing football after he turned their back garden into a pro football pitch.

The dad-of-five has spent a total of £7,000 on the pitch, which includes floodlights, bespoke graffiti panels and a professional astroturf surface for his kids to play on.

Tearing up the patio and garden at their home, he created the 120sqm space for football-mad kids, George, 13, Maisy, 12, Fenlon, eight, Frankey, six, and Carlsson, two can have a kickabout whenever they like.

Carl, a roofing contractor, said: ‘Our garden isn’t for everyone, but it is perfect for us.

‘I didn’t intend on having a football pitch in my back garden.

‘But during the first lockdown, George, 13, Maisey, 12, Fenlon, eight and Frank, six, used to play outside daily.

‘They kept breaking the fence panels with the ball.

‘It made a horrible noise so I decided to do something about it.

‘I brought six foot phenolic panels to surround the garden – which is the same as what they use to build a skate park.

‘It deflects the heat so the children wouldn’t get burnt if they were to touch it.

‘They cost £1,800 from eBay and I fitted them myself. Then it snowballed from there.’

Next, the Birmingham City supporter hired a professional spray painter to decorate the panels by writing the children’s names and images of their favourite players – Ronaldo, Lionel Messi and England star Jude Bellingham.

Carl added: ‘We also had some advertising sprayed onto the panels to make it more realistic.

‘The idea just kept on evolving and I knew it was going to be epic.

Carl’s wife, stay-at-home mum Hayley, 34, disliked the vision initially but has come round to the idea.

Carl said: ‘She didn’t want to say goodbye to our nice garden that had a patio and flowers but now, she loves it.

‘I prepped everything and completed the ground work for the grass, which involved putting down sand layers.

‘We’ve had 3G surface grass which is a modern astro turf.

Carl spent eight hours per day on the garden for four weeks in September and it’s been a huge hit with the kids.

He said: ‘The kids aren’t bothered about playing on their computers now that they’ve got the pitch.

‘They have a private lesson in the garden once a week.

‘They never want to come in. I hired an electrician to fit some LED lights which change colour and illuminate the boards.

‘Along with six foot tall lights to make it more like a football pitch.

‘The kids can’t wait for their friends to come over once the restrictions ease.’


MORE : Bargain-hunting dad gets everything he needs for Christmas dinner for £2

READ  From Halloween to Japan, creative mum shows off fun themed packed lunches for her children
Share on FacebookShare on TwitterShare on PinterestShare on Reddit
newsgrooveDecember 29, 2020