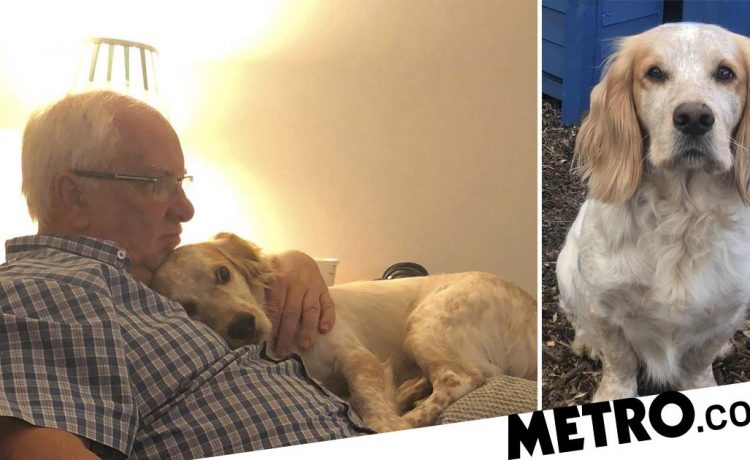 A father said he has lost his ‘best friend’ after his beloved dog, who helped his recovery with depression, was stolen as he was beaten to the ground.

Mike Jasper, 66, from South London, is offering a £5,000 reward in a bid to get his Sprocker Spaniel Ted back home safely as he struggles to cope with the loss of him.

The father was walking Ted in Cannon Hill Common in Merton, after visiting his allotment, when a man approached him asking questions about what breed the Spaniel was.

When Mike, 66, said he was just leaving, the man responded: ‘What, do you think I’m going to steal your dog?’

Just as Mike bent down to put Ted on his lead, a second man came up behind him, punched him in the back and shoved him to the floor.

He helplessly watched them grab Ted’s lead and run off with the dog laughing.

Ted has been a great source of comfort since he was brought into the household three years ago to help Mike, who suffers with anxiety and depression.

Mike said: ‘He is everything to me and my family and the house is so quiet and lonely without him.

‘I’ve really struggled with my mental health over the last few years and Ted was a big part of my recovery, without him I don’t know how to go on.

‘It just feels like I’m living in a nightmare with no end in sight.’

The dad, who has owned dogs his entire life having previously owned a kennel and trained security dogs, said Ted is the ‘happiest most loving dog’.

‘I’ve never known one like him,’ said Mike. ‘His tail never stops wagging and he would follow me absolutely everywhere.

‘I feel like I have lost a family member and a best friend.’

The day Ted was stolen was the first time Mike had been walking on Cannon Hill Common in six weeks, after he thought he heard someone taking pictures of Ted on their phone last time he was there.

The dog snatchers have been described as two white males in their late 20s, between 5″10 and 5″11. One had a London accent and was wearing camo trousers and a black hoodie at the time, while the other was wearing a black Puffa Jacket and a baseball cap.

The family paid £600 for Ted, a cross between a cocker and springer spaniel, three years ago – but they believe dog snatchers could sell him for around £3,000 due to price hikes amid the pandemic.

Mike believes Ted was targeted because he looks like a working cocker spaniel, which can be worth thousands of pounds, and are one of the top most stolen breeds.

Since the beginning of last year, dog theft in the UK has surged 250%, with the hike being blamed on the rise in demand for pets to keep families company as they work from home.

Mike, who spent 10 years in the police force, said: ‘I never thought anything like this would happen to me.

‘I’ve always been able to take care of myself and I never believed someone would be able to do this.

‘I just keep thinking “no this can’t have happened. Ted can’t be gone”.’

Daughter, Lucinda, 28, who arrived at the scene shortly after the mugging, said her dad has been struggling with mental health concerns for the past four years.

‘So after a year of battling depression and anxiety my mother decided to buy Ted,’ she added. ‘It was amazing to see the amount of change Ted had on my dad.

‘Obviously he still has his down days, but Ted was a massive part of his recovery.’

The family has been putting up posters around Wimbledon offering a £5,000 reward for anyone who can bring Ted home.

Mike said: ‘It was the advice we were given when we spoke to people who had gotten their dogs back safely.

‘Either your dog comes home or they will contact you and extract money from you.’

A police spokesperson said: ‘Police were called on Thursday, 15 December 2020 at 10:00hrs, to a reported robbery on Cannon Hill Lane.

‘Upon police arrival, officers found a victim who reported that his dog had been stolen.

‘The victim had been approached by a male who was asking questions about his dog and was then pushed from behind by a second suspect and his dog, a white, light brown Spaniel, with darker brown ears, was stolen.’

READ  Woman says her pet raccoon is her ‘child’ despite destroying her house
Share on FacebookShare on TwitterShare on PinterestShare on Reddit
newsgrooveJanuary 14, 2021