Cynthia Erivo received the Breakout Actress Award at the Hollywood Film Awards for her role as civil rights icon and abolitionist Harriet Tubman in the 2019 biopic Harriet.

There’s also now been talk of a possible Academy Award nomination for the British-born actress.

And on Sunday, in the midst of a major promotional push for the film, she sat down with moderator Tomris Laffly and discussed the role at the SAG-AFTRA Foundation Conversations program at the Robin Williams Center in New York City. 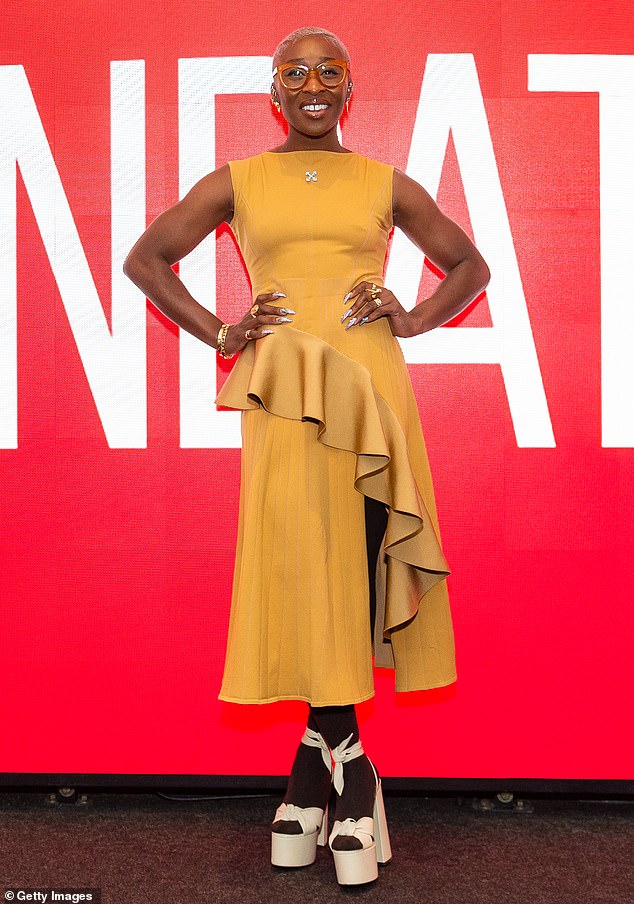 Erivo, 32. stunned in a very festive orange dress that had a wrap-around design near the waist allowed her to flaunt her left leg at a moments notice.

Underneath, she wore a pair of black-patterned leggings, which she was more than happy to show off.

The Widows star’s petite 5ft 1in stature got a lift in a pair of white platform heels that were several inches thick.

She rounded out her ensemble with orange-rimmed glasses and her hair close-cropped and dyed platinum whit. 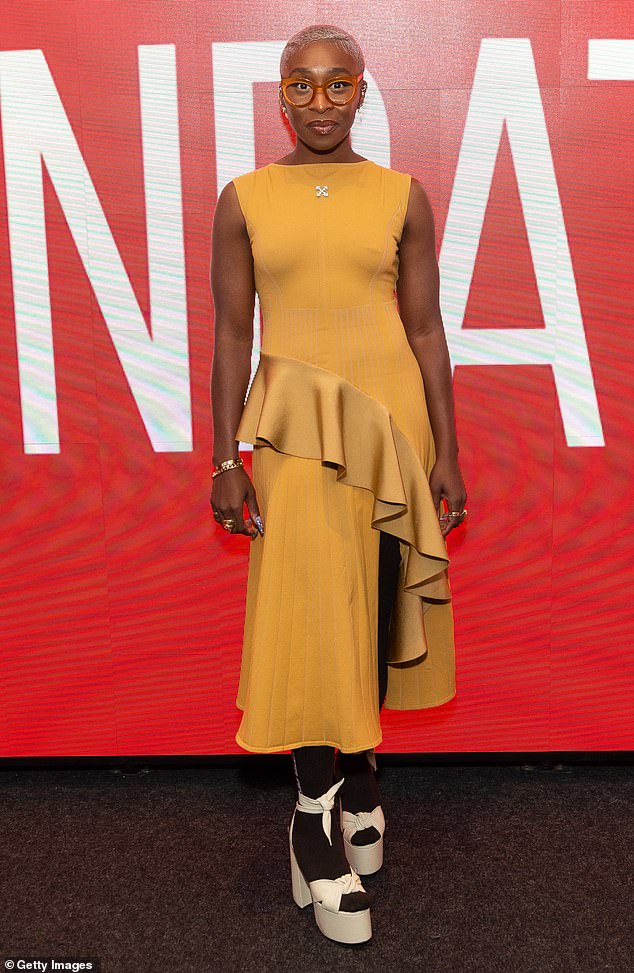 Eye-catcher: Erivo, 32. stunned in a very festive orange dress that had a wrap-around design near the waist allowed her to flaunt her left leg at a moments notice 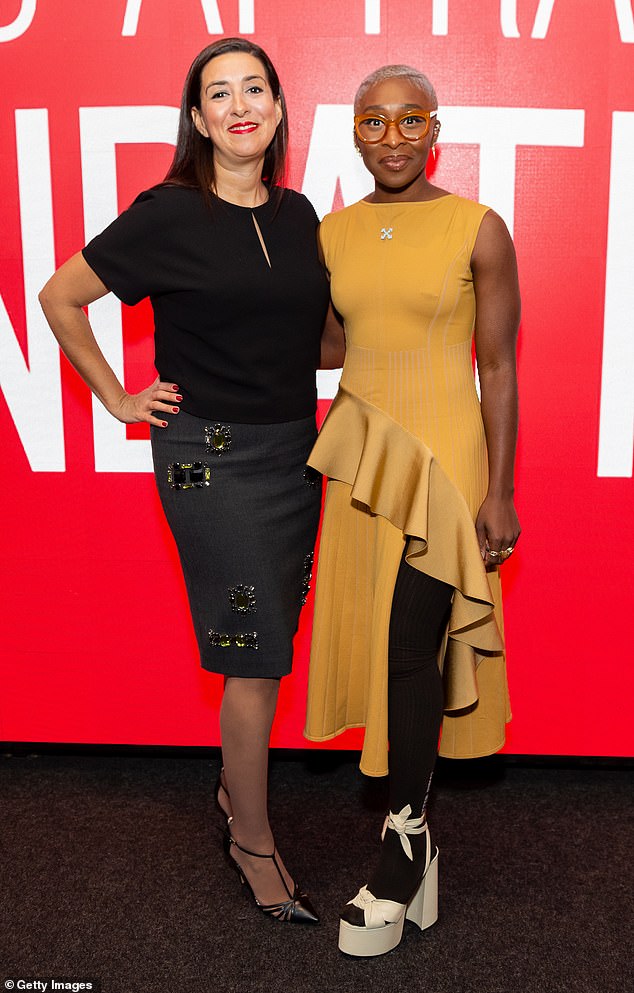 Ladies time: The actress also wore black leggings underneath her dress; she posed on the red carpet with Q-and-A moderator Tomris Laffly

Born into slavery in Maryland in 1822, Harriet Tubman escaped captivity and became a loud voice of change as an abolitionist and political activist.

During her heroic activism, she made about 13 missions and rescued more than 70 enslaved people, some of them were friends and family members.

Going into the project, Erivo said she was determined to show Tubman for the hero that she was but also as a real-life human being. 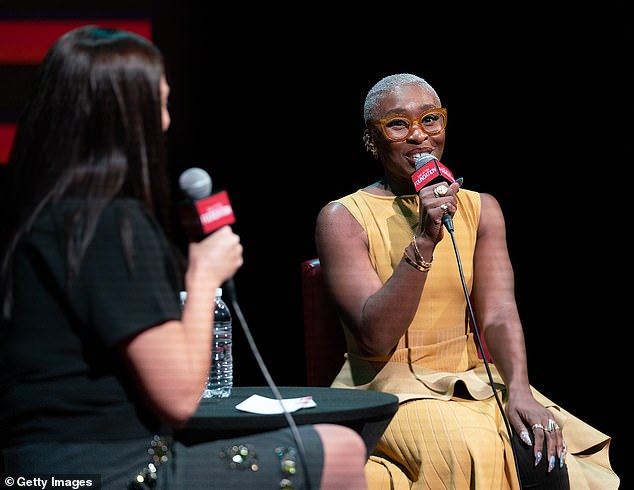 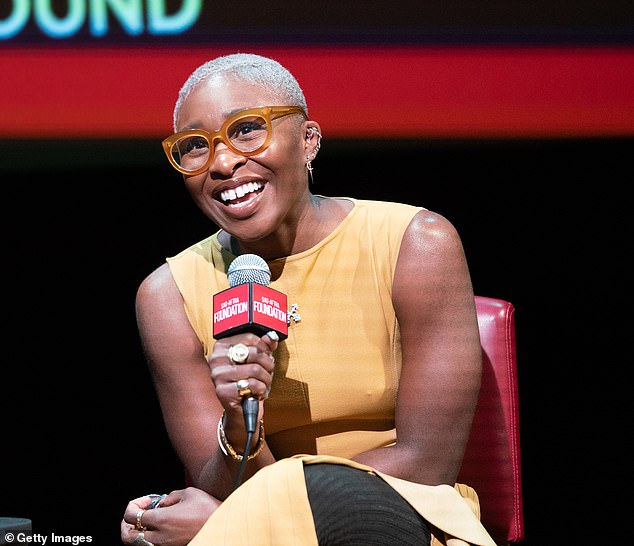 The icon: Eviro discussed how she and the filmmakers also wanted to focus on Tubman as a real human being and woman in the film, which was directed by Kasi Lemmons

‘We knew that everyone knows about her heroics, we knew the work that she’d done, but we didn’t know much about the human and the woman,’ she revealed in an interview with the SAG-AFTRA Foundation.

‘And so what we wanted to try and do is really bring that to the forefront.’

READ  NCIS season 17 trailer: Who is Sahar? Why is she after Ziva?

Harriet, which was directed by Kasi Lemmons, hit theaters in the US November 1. It also stars Leslie Odom Jr., Joe Alwyn and Janelle Monáe. 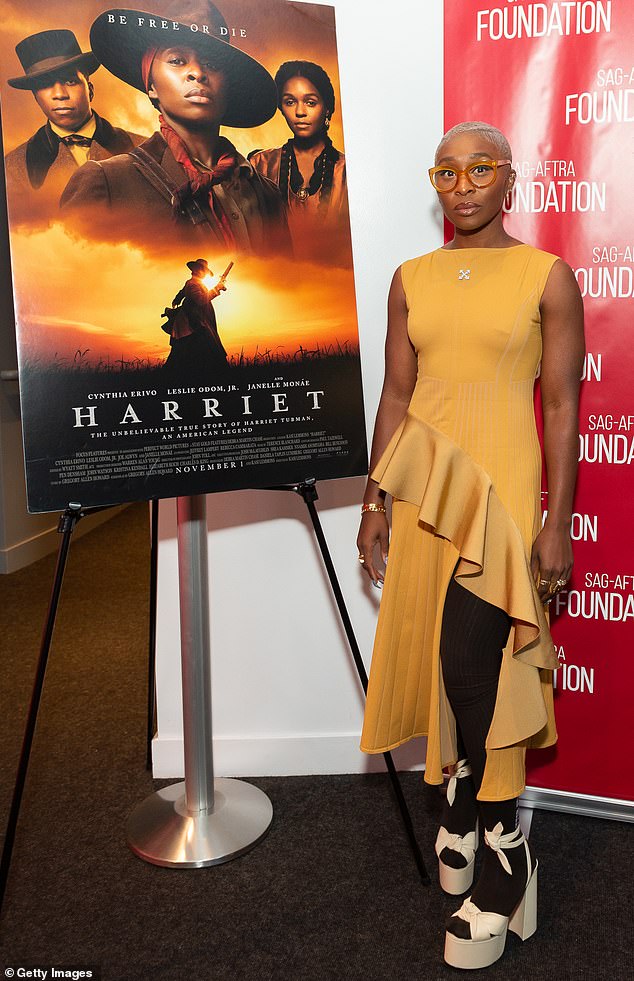 Acclaimed: The British-born actress has been getting some Oscar buzz for her role in Harriet

Confusion around which kind of cruises are allowed in Scotland