Cutting air pollution has been proven to lead to ‘fast and dramatic’ health benefits, according to scientists.

Researchers said improving air quality where people live could reduce cases of heart and lung diseases by up to 40 per cent in just a few months.

They studied the effects of past attempts to lower pollution and the unexpected benefits of closing factories or taking traffic off the roads.

People’s health can improve in as little as a week and laws to make the air cleaner save significant amounts of money on healthcare, the research found. 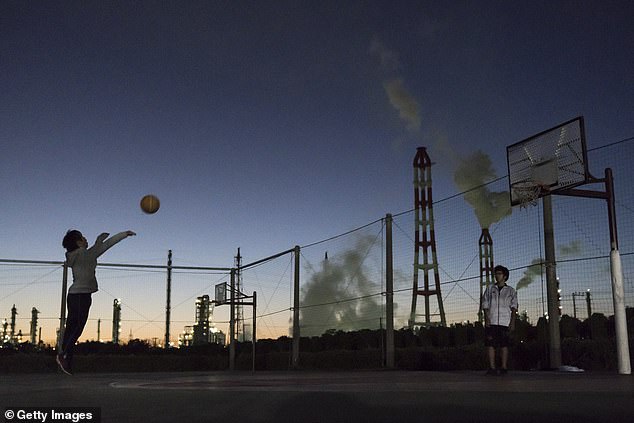 Research found that when countries around the world have closed factories or roads, pollution has dropped and hospitalisations for lung and heart conditions went down (Pictured: People play basketball near polluting factories in Kamisu, Japan)

‘We knew there were benefits from pollution control, but the magnitude and relatively short time duration to accomplish them were impressive,’ said Dr Dean Schraufnagel, a professor at the American Thoracic Society.

‘It’s critical that governments adopt and enforce WHO guidelines for air pollution immediately.’

Dr Schraufnagel and his colleagues studied the effects of air pollution reductions around the world. 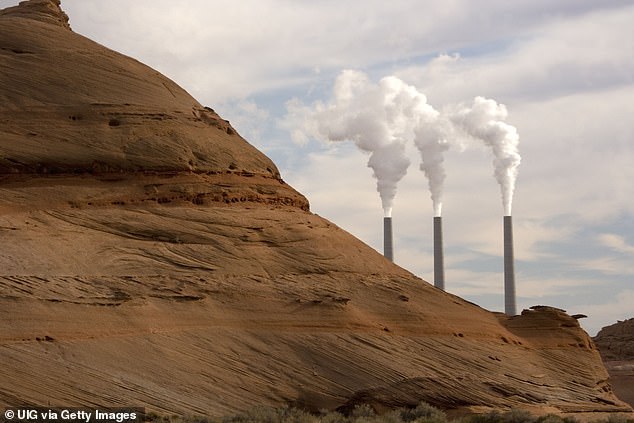 When a steel mill closed in Utah, the study said, the number of people going to hospital with lung conditions such as pneumonia and bronchitis fell by half (Pictured: The chimneys of a coal-fired power station in Utah)

BREATHING LONDON AIR ‘IS LIKE SMOKING 160 CIGARETTES A YEAR’

Breathing air in the UK’s most polluted areas is as bad as smoking almost 160 cigarettes a year, a charity has warned.

The British Heart Foundation said pollution in cities is a public health emergency and urged the government to bring in stricter rules to cut it down.

It found air quality is four times as bad in the worst area – Newham in East London – as it is in the cleanest – the Outer Hebrides in Scotland.

And almost all of the 25 areas with the most polluted air in the UK were in the English capital, with the exception only of Slough and Dartford.

Particles of pollution can seep into the body and cause life-threatening damage, raising the risk of stroke and heart attack, and contributing to lung diseases and cancers.

READ  Key to fast weight loss could be yoghurts – it could tackle childhood obesity, docs say

‘Air pollution is a major public health emergency and over many years it has not been treated with the seriousness it deserves,’ said the charity’s Jacob West.

They found that rates of heart and lung diseases dropped by around 30 per cent in Ireland when the country banned smoking indoors in public places.

The closure of a steel mill in Utah for 13 months led to only half as many people in the area going to hospital because of lung conditions such as asthma, pneumonia and bronchitis.

When Atlanta, Georgia, hosted the Olympics in 1996, traffic restrictions cut the number of people needing asthma treatment by 44 per cent over the course of four weeks.

And the same effect was seen in Beijing during the 2008 Olympics, when roads and factories were closed – pollution levels there dropped by 62 per cent and there were 58 per cent fewer doctors’ appointments for asthma over a two-month period.

When breathed in it can be directly toxic to the tissue it comes into contact with and can raise the risk of heart disease killing someone at a younger age.

It may also worsen heart and lung conditions in existing patients, or contribute to children or the elderly developing illnesses such as asthma.

‘Air pollution is largely an avoidable health risk that affects everyone,  although the most vulnerable – the ill, the elderly, children, and the poor – face disproportionate risks,’ Dr Schraufnagel and his colleagues wrote.

‘Urban growth, expanding industrialisation, global warming, and new knowledge of the harm of air pollution raise the degree of urgency for pollution control and stress the consequences of inaction.

The scientists estimated the the US Clean Air Act – a 1963 set of laws designed to control air pollution – saved the nation $2trillion (£1.5trillion) over 25 years.

Reducing indoor pollution also had benefits, according to studies done in Australia, New Zealand and the US.

Their research was published in the journal Annals of the American Thoracic Society. 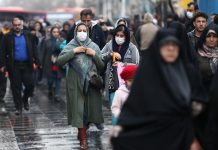 How to live longer: The surprising drink which could be the secret to long life expectancy

FA guidelines: Children to no longer head footballs during training