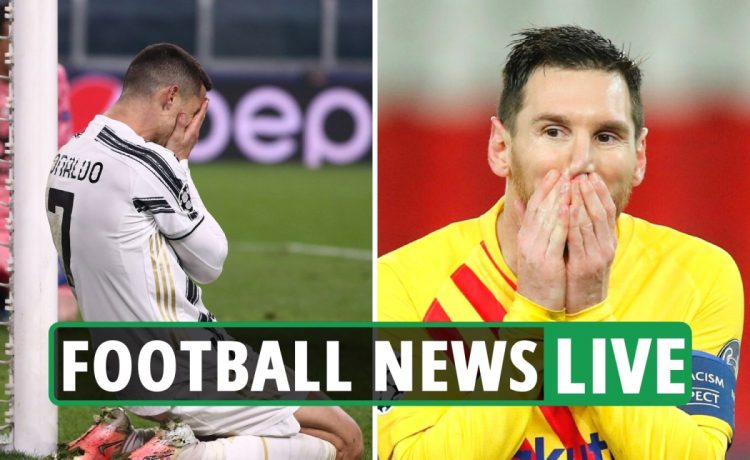 It was an action packed evening of football last night as three British sides played the first-leg of their Europa League last-16 ties.

Manchester United threw away a lead to draw 1-1 with AC Milan at Old Trafford.

Milan had two goals disallowed in the first-half – one for a blatant offside before Franck Kessie was harshly judged to have handballed it in the build up to his stunning volley.

But the main talking point of the first-half was Harry Maguire missing the easiest chance the world has ever seen from all of one yard in the latter stages.

The centre-half somehow hit the post from point blank range.

But that didn’t matter just five minutes into the second period when Amad Diallo got on the end of Bruno Fernandes’ impressive ball over the top and executed a brilliant back-header which looped over Gianluigi Donnarumma.

United dug in and looked like they would hold on for a precious clean sheet.

But in the second minute of stoppage time, Simon Kjaer got on the end of a standard looking in swinging corner.

His glanced header was straight at Dean Henderson but he failed to tip it over and it went in to give Milan a valuable away goal.

Despite some shaky defending, three outstanding goals were enough to give Arsenal a commanding lead ahead of the second-leg.

Martin Odegaard’s piledriver was the first and the best before Gabriel’s header and Mohamed Elneny’s long range effort saw the Gunners home comfortably… in the end.

Arteta did not look happy after Bernd Leno and Dani Ceballos combined to hand El Arabi a goal on a plate to make it 1-1.

But they’ve done the job and the Spaniard will be pleased with the result and the three away goals.

Elsewhere, Premier League stars are being quizzed on how they can fix the VAR mess.

Surveys are being sent out to all 20 top-flight clubs in an unprecedented move by league chiefs.

Managers, captains and top brass from clubs will provide feedback on the  system which has been ridiculed all season.

The shambles reached a new low on Wednesday after Manchester City’s Phil Foden was denied a stonewall penalty against Southampton.

League chiefs will now finally listen to their frustrations and surveys are expected to be returned by next Friday ahead of being discussed at the next shareholder meeting on March 25.