There are some people who think Cristiano Ronaldo is a problem for Manchester United, but god knows where they would be without him.

I said a few weeks ago that, if it wasn’t for Ronaldo, United would be far worse off than they are – and Saturday’s game against Tottenham summed up why in a nutshell.

He was quite simply the only reason they beat Spurs. His hat-trick was phenomenal and his overall performance was so good, it was staggering.

It was no surprise to me because he has been doing this for years and years now – he has 59 hat-tricks, which is just ridiculous – but this was some response to his critics and all three of his goals were special in their own way.

A textbook header to complete his hat-trick

You could argue Eric Dier was at fault for Ronaldo’s first goal of the night – you cannot allow any player that much space to shoot from distance, let alone if that player is Cristiano Ronaldo.

But as much as Spurs will analyse it and look at how poor they were defensively, you still need incredible skill and technique to be able to do what he did and find the top corner from there.

His second goal was nowhere near as spectacular but you can bet it gave him just as much satisfaction. I enjoyed scoring from three yards just as much as I did from 30.

It’s a tap-in but he is in the right place to put it away from three or four yards out because of his desire and his intelligence – his positional play and his understanding of the game gets him in there.

His third goal was my favourite, though – Ronaldo had to get every part of it right, and he did.

From the way he reads the flight of the cross to the way he attacks it and times his jump, then meets the ball with accuracy and power, it was all absolutely perfect – a textbook header.

In those situations it is always one versus one – attacker against defender, and you’ve got to be stronger than everyone else. Ronaldo had to get away from his marker, Cristian Romero, who is trying to hang on to him, then had to read the cross and get the contact right to guide it in as Matt Doherty put him under pressure.

To do all that within about two seconds as the ball comes over is not easy, but he made it look that way.

United have still got a heck of a lot of work to do to get a top-four finish from here, but if they do miss out then there is no way on earth you can pin the blame on Ronaldo.

They would not be in a position to challenge for the Champions League places if it wasn’t for him, so I don’t buy that as the reason their results have not always been good enough.

Their big problem is defensively – they are terrible at times, and we saw that again against Tottenham despite the end result this time.

Yes, United deserve some credit for the way they responded to what happened to them in the derby last weekend and this was a huge result for them, but they had no control of the game whatsoever and it was Ronaldo’s brilliance that got them over the line.

Behind him, again, they were a bit of a mess at the back. Harry Maguire is having a hard time of it at the moment, and has been for most of the season, but I don’t think their struggles are just down to him – collectively, they are a poor unit defensively.

There are other issues for Ralf Rangnick too. Marcus Rashford had another quiet game and he just doesn’t look like he is enjoying his football or being out on the pitch at the moment.

Rashford is having a tough time, and it has been a tough season for him. I don’t know why, but he certainly hasn’t got the fizz or zip to his game that we are so used to seeing and we know is in there. It’s down to Rangnick and his coaches to find out why.

Two teams in the race for fourth

With 10 games of the season to go, we have got a proper title race on our hands between Manchester City and Liverpool – and who gets fourth place is going to be very interesting too.

Tottenham are still in the mix when you look at the table but their form is not good enough – including their FA Cup exit, they have gone win-lose, win-lose, win-lose in their past six matches and that will not get them a Champions League spot. 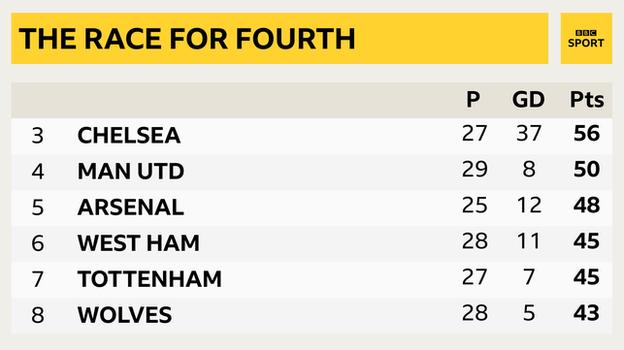 Week to week, though, you don’t know which Tottenham team will turn up – will it be the side who were so brilliant against Manchester City a few weeks ago, or the one that was so poor defensively at Old Trafford.

That inconsistency is going to cost them, and that’s why fourth place is probably between Arsenal and United now. The Gunners have got all these games in hand but I still think it is going to be very tight between those two come the end of May.