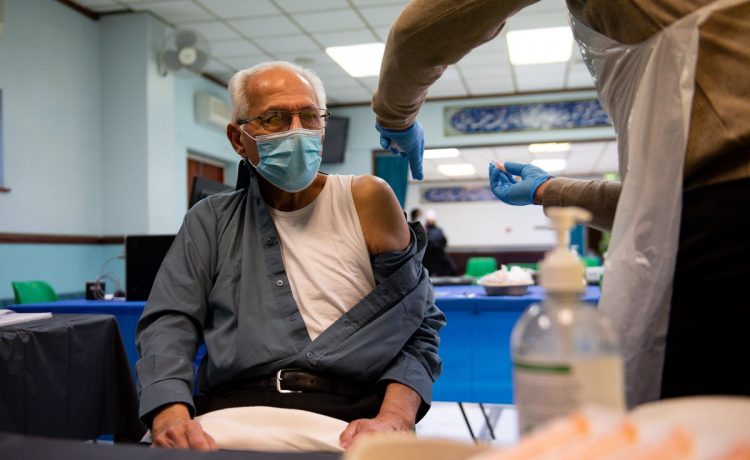 accine centres in London are being forced to close their doors for days at a time because of a shortage of jabs, the Standard can reveal.

Two hubs in Harrow are being forced to send vaccinators and volunteers home and redirect vulnerable elderly residents miles across the borough.

Today one of the borough’s MPs called for the problem to be solved “as a matter of urgency” as fears grew that a lack of co-ordination by NHS England had left London at the bottom of the national roll-out.

Sources involved in the vaccine delivery said the Byron Hall site had to close last night after running out of supplies and a second site, Tithe Farm, expects to close at lunchtime tomorrow.

Both are able to deliver 600-650 jabs a day but neither expects to receive further supplies until Friday. Tithe Farm had already been closed for four days last week.

An insider said: “When nurses are willing to give up their time to do this job, it seems a bit of a slap in the face. The clinicians and the whole team are so keen to vaccinate the population. Even if you were distributing packets of crisps, you would know where the demands are.”

Another said: “Tithe Farm will run out of vaccines by Tuesday lunchtime and not have any more until Friday. I think we will get 800 on Friday. They will last until Saturday.”

It is understood that a third hub, The Hive at Barnet Football Club, has so many vaccines that it has been running walk-in clinics and offering jabs to younger people in a bid to ensure none are wasted.

READ  Rodent leather and designer kidneys: art in the age of bio-revolution

Clinical staff are concerned that priority groups remain at risk – about 20 per cent of over 80s in the borough are still to be offered jabs. There is concern that people who have been shielding since March are being forced to travel across the borough because their nearest vaccine centres have run out of supplies.

“It’s a very inequitable situation. It worries me that our elderly population is not fully covered.”

Harrow West Labour MP Gareth Thomas told the Standard: “I have raised directly with Ministers including the Vaccines Minister supply problems at the vaccination centres in my constituency.

“This needs to be sorted out as a matter of urgency to ensure people from Harrow aren’t left behind in the race to get everyone vaccinated. It would be a continuing scandal if volunteers and medical professionals in our borough couldn’t get on with the job they’re ready to do because Ministers haven’t done theirs.”

There are hopes the situation could be resolved when hubs are allowed to order jabs from next month rather than having no say in the quantity of supplies.

London continues to lag behind the rest of the country for vaccine roll-out, with 10.7 per cent of the England-wide total of 5.9 million having been given in the capital. NHS England figures last night showed 641,577 jabs, including 55,018 second doses, had been administered in London.

It came as experts warned the Kent strain of the virus could be “significantly more risky”. Professor John Edmunds, of the London School of Hygiene and Tropical Medicine, said the Kent variant was more infectious and more deadly. “It’s really a serious turn for the worse, unfortunately,” he told a media briefing today.

Research estimates the Kent variant has increased the death toll in people over 60 from 10 per 1,000 to 13 to 14 per 1,000. About 80 per cent of recent covid cases in London are thought to have involved the Kent strain.

It will mean that more than 190 vaccination services will be operating across the capital by the end of the week.