Treasury minister Lord Agnew has resigned from the government over how it has handled fraudulent Covid business loans.

The Conservative peer marched out of the House of Lords, saying “schoolboy errors” had been made in a “desperately inadequate” operation.

He was updating peers about £4.3bn of loans – written off by the Treasury – which Labour said has gone to “fraudsters”.

In what has been described as “one of the most dramatic moments ever seen” in the upper chamber, Lord Agnew slammed his folder shut, said “thank you and goodbye”, and immediately left to applause.

“Given that I am the minister for counter-fraud, it would be somewhat dishonest to stay on in that role if I am incapable of doing it properly,” he said.

It comes as people arriving in England from abroad will no longer have to take Covid tests if they have been vaccinated, Boris Johnson said on Monday.

The prime minister said the rule change was designed to show that the country was open for business and travellers, though he did not say when the requirement would change. Further details are expected to be given later on Monday.

A New York judge has struck down the state’s mask mandate on Monday, one week before it was due to expire.

Judge Thomas Rademaker of New York state supreme court on Long Island found that the state legislature last year curbed any governor’s ability to issue decrees, such as a mask mandate, amid a declared state of emergency.

It was the latest setback for executive branch officials at state and federal levels. Earlier this month, the US Supreme Court blocked president Joe Biden’s vaccination-or-testing mandate for large businesses. A judge in Texas last week ruled that Mr Biden could not require federal employees to be vaccinated.

Governor Kathy Hochul, a Democrat, vowed to fight back, saying in a statement, “We strongly disagree with this ruling, and we are pursuing every option to reverse this immediately.”

“My responsibility as Governor is to protect New Yorkers throughout this public health crisis, and these measures help prevent the spread of Covid-19 and save lives,” Mr Hochul said.

The Beijing 2022 Winter Olympics organizing committee said that 15 new positive cases of Covid-19 were detected among games-related personnel in the last 24 hours.

Twelve of the confirmed positive cases were among new arrivals, the notice on the Beijing 2022 official website said on Tuesday. While the other three were found among those already in the closed-loop, and of those three, one was an athlete or team official.

Beijing has already relaxed some of its countermeasures for participants ahead of the winter games.

The changes include the threshold for being classed as positive for Covid-19 being eased and the time period for which a person is deemed a close contact being reduced from 14 to 7 days.

Japan’s government is to extend coronavirus restrictions in the face of an Omicron surge.

Prime Minister Fumio Kishida said he will tighten measures because the fast-spreading strain is threatening to disrupt basic services including hospitals and schools.

Mr Kishida plans to put the majority of the country under “pre-emergency status”. Under the latest measures, most restaurants are asked to close by 9pm in exchange for government subsidies, and there are restrictions on large public events.

The Prime Minister announced stricter anti-virus measures until 20 February in 18 prefectures, including Hokkaido in the north to Osaka and Kyoto in western Japan.

This is in addition to areas where similar restrictions are already in place or set to be extended further – including Tokyo, Okinawa, Yamaguchi and Hiroshima.

Mr Kishida said he will officially announce the move on Tuesday after consulting with a government panel including health experts.

The Korea Disease Control and Prevention Agency (KDCA) reported 8,571 cases for Monday, exceeding the previous peak posted in mid-December of 7,848.

The new record came amid the spread of the more transmissible Omicron variant, which became dominant in the country last week, despite less testing over the weekend.

Daily tallies had almost halved to around 4,000 this month but began rebounding last week because of Omicron infections, logging their second-highest level on Saturday.

The surge fuelled worries about a potentially bigger wave ahead of the Lunar New Year holidays when tens of millions of Koreans usually travel across the country for family visits.

The country has so far recorded 733,902 Covid-19 infections and 6,540 deaths, KDCA data showed. More than 95 per cent of South Korean adults have been fully vaccinated and nearly 58 per cent have received a booster shot, KDCA data showed.

Lord Agnew’s resignation over the government’s handling of fraudulent Covid business loans has been described as “one of the most dramatic moments ever seen” in the House of Lords.

He accused the Treasury of having “little interest in the consequences of fraud to our society” and blasted the “arrogance, indolence and ignorance” across government departments.

He said: “Given that I am the minister for counter-fraud, it would be somewhat dishonest to stay on in that role if I am incapable of doing it properly”.

Adam Forrest has the full story below.

The emergence of the claims, reported by ITV news yesterday, will not delay the publication of her inquiry further and it is still expected this week.

The senior civil servant has been investigating a series of claims of rule-breaking parties in No 10 – as Mr Johnson faces calls to resign as Prime Minister, including from some of his own Conservative MPs. 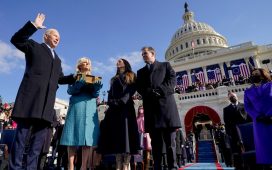