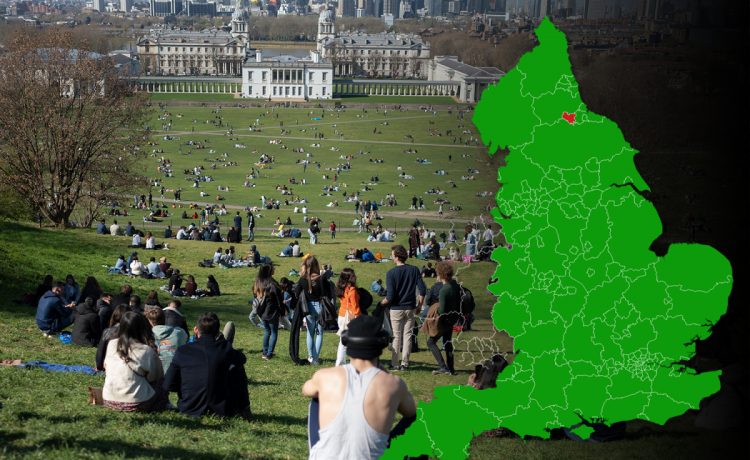 COVID cases have fallen in every part of England except one, as Boris comes under pressure to lift the lockdown quicker.

Official data reveals cases have spiralled by as much as 70 per cent in one week.

To see how your area has fared, view this interactive map.

Hammersmith and Fulham saw the biggest decrease in cases, coming down from 45 cases in every 100,000 residents to 15.

Infection rates are no higher than in Barnsley, where 104 people per 100,000 were diagnosed with Covid last week.

The only place that saw cases go up in the week to April 4 was Darlington, North East England.

But the infection rate is still only at 68 per 100,000, meaning the slight increase of nine per cent is likely to come down to just a small cluster of cases.

An interactive map using the data – which you can use to view how cases have changed in your area – shows an increasingly improving picture of the country’s outbreak.

The dramatic change from the peak of the pandemic, in January, proves just how well the lockdown and vaccine programme have worked.

More than half the adult population have received the first dose of a jab, which studies have shown can slash transmission of the virus.

It comes as data from the ZOE COVID Symptom Study app shows 1,924 people are catching symptomatic coronavirus each day.

It’s a huge drop from 4,152 daily cases reported by the researchers last week.

Professor Tim Spector, lead author, said the UK is now in a similar position to last summer when the country had opened back up again.

But there is still five weeks to go before restaurants, pubs and cafes can open to customers indoors and groups of 30 can meet outdoors.

England is also seeing the lowest case numbers in all of Europe, Prof Spector said, as other EU nations contend with a third wave.

He said: “It’s unlikely that cases will continue to fall at this pace, but with the vaccinations programme and the weather improving, it’s likely they will remain low.”

The REACT study – Britain’s biggest infection rate survey and used by the Government – has for the first time shown decreases in deaths driven by the jabs alone.

Steven Riley, professor of infectious disease dynamics at Imperial College London, said: “We’re observing fewer deaths per infection than we would have expected based on the recent prior months of the study.

“To a lesser extent, we’re seeing fewer hospitalisations per infection as well.

“We think that this is a signal of how the vaccination programme is breaking the link, the previously strong link, between the pattern of infections and the patterns of deaths and hospitalisations.”

Amid a series of positive datasets, Sir Iain Duncan Smith told MailOnline the UK’s release from lockdown “should be quicker” now, to reflect the positive new data instead of the PM’s current “deeply pessimistic” roadmap.

He said: “I think we should be opening up hospitality inside not just outside next week, or certainly very close thereafter and then other stuff cascading directly as a result of that.

“Instead of which I think we are sort of in a peculiar place where we are so cautious now that the idea we were following the data is not correct.”

Scientific experts have also said the data suggests society can return to normal sooner than planned.

Dr Mike Tildesley told LBC: “I think if these numbers keep going down over the next few weeks there certainly is an argument to say ‘well actually we’re doing really well with the road map, it could be sped up’.”

SIX OF THE BEST!

“I will say that if things keep going down at the rate that they are then there certainly is an argument for speeding up the process.”

Amid growing calls for earlier restriction lifting, the Health Secretary Matt Hancock stressed the move out of lockdown must be “irreversible”.

He said: “We’re on track to meet the roadmap and that is our goal.”