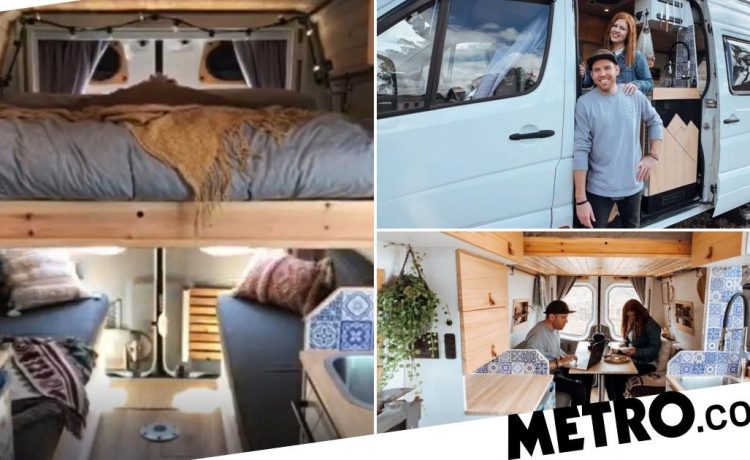 A couple have transformed an old delivery van into a mobile holiday home with a hot water shower that can sleep four.

All told, it took them over a year to convert it into a motor home.

Now, the 2008 Mercedes-Benz Sprinter can accommodate four people, and has its own solar panels, water storage, and a hot water shower.

Cameron, a DIY enthusiast, even made a bed frame to fit a mechanism which allows the sleeping area to lift to the ceiling, allowing the couple to make the most of the space while on the road.

Cameron, who hails from Australia, said: ‘We had hired vans while travelling around the UK and in New Zealand and really enjoy the freedom van travel can offer.

‘We also had our own small van before but decided to upgrade to the bigger Sprinter.

‘The main perk of living out of a van is the freedom – we have everything we need with us all the time, and we can travel very cheaply.’

Cameron and Emmeline were lucky enough to buy the van on the cheap after Australia Post had upgraded their fleet.

Plus, they were able to balance the year spent working on the DIY refurbishments with their jobs as full time teachers.

Cameron added: ‘We don’t live in it full time.

‘We use it for road tripping during the school holidays and also use it every weekend either getting away to the coast, camping with friends or just driving it down to the local park or lookout, so we can have all our food and drink with us.

‘It’s great because there is no deadline to check-in or check-out at accommodation and there are plenty of free campsites around Australia, so you can travel very cheaply.

‘Having all our own power and water means we never need to pay for hook-up campsites.’


MORE : Eight of the prettiest glamping spots in the UK

READ  Flights: Pilots reveal the terrifying truth about what really happens in the cockpit
Share on FacebookShare on TwitterShare on PinterestShare on Reddit
newsgrooveApril 3, 2021