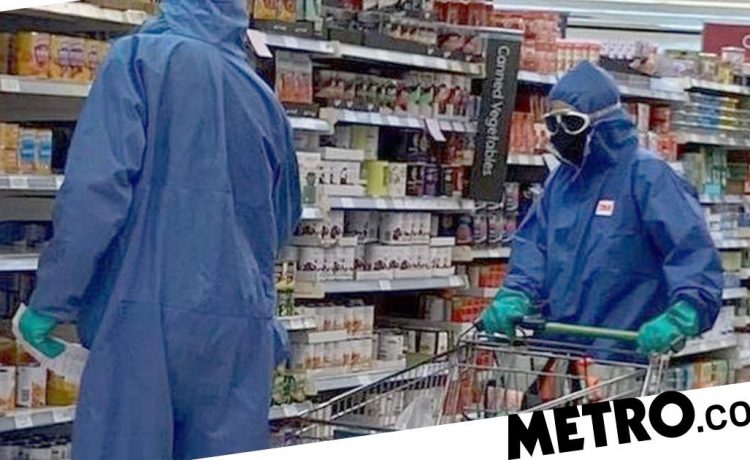 A couple were spotted taking no chances against coronavirus as they did their big shop in Waitrose in full hazmat suits.

The unidentified shoppers sported goggles and gloves while dressed head-to-toe in the protective suits in Hull.

They were seen browsing in the canned goods aisle and appeared to be shopping to a list, and came prepared with several bags for life.

Face masks are mandatory in all shops unless you are exempt, but some people have been taking matters into their own hands during the pandemic.

The bemused person who took the photo said: ‘Applause to the two people who visited Waitrose in Willerby in full hazmat suits, gloves, and goggles.’

Meanwhile, almost two million people in England will receive invites to book a coronavirus jab as part of the mass rollout of vaccines.

A total of 17,254,844 Covid-19 vaccinations have now been administered in England between December 8 and February 26, according to the latest figures.

People aged 60 to 63 are next in line for the jab and will receive letters from the NHS from today.

The next batch of invites were sent out after health bosses said more than three in four people aged 65 to 70 took up the offer of the vaccine and booked in to be jabbed.

READ  ‘That’s it!’ Archaeologist's stunned response as Gospel 'location of Jesus' miracle found'
Share on FacebookShare on TwitterShare on PinterestShare on Reddit
newsgrooveMarch 1, 2021