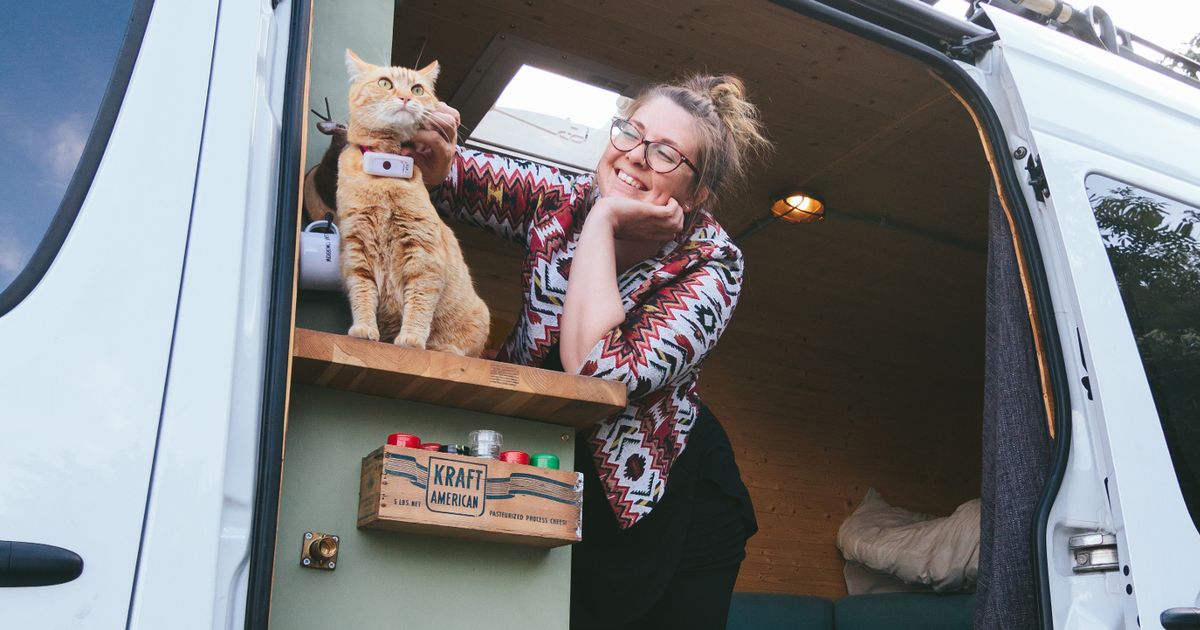 An intrepid couple have explored 28 countries in their campervan with the purrfect travelling companion… their CAT.

The puss spent six months living on a narrowboat before heading off by road to the Netherlands, France, Germany, Estonia, Lithuania, Switzerland and Romania.

She has witnessed the beauty of Italy, the beaches of Greece and the mountains of Austria.

And the kitty has just come back from six months exploring the Arctic Circle, taking in Sweden, Finland, Denmark and Norway. Bee and Theo are childhood sweethearts who sold all their belongings in 2014 for a life of travel and adventure.

And when they left Birmingham, they decided to take beloved Ginjey too.

Bee, 30, said: “I was working at a vet’s when Ginjey Bear was brought in. She’d been stuck up a tree as a kitten and was rescued by the fire brigade. She wasn’t microchipped and nobody came to collect her, so we decided to adopt her.

“She moved in with us on our narrowboat and is the perfect companion for a life of adventure.

“She’s inquisitive and can swim pretty well after falling in the canal a handful of times while in the Midlands. She loves adventure and is completely unfazed, whether travelling in a boat or driving along foreign roads in our van.”

The pair adapted their Mercedes Sprinter van to suit the cat.

Theo, 31, said: “We converted the van and built it with Ginjey in mind. We created an over-cab mezzanine nook, which is her day bed for her to sleep in – which she loves.

“And we built her litter tray under the seating area.

“Ginjey follows us everywhere and, as we always park up in fairly remote locations, it means she can come along for walks too.

“Exploring beaches, forests and coastal areas is always more enjoyable with her along. She reacts differently to the new surroundings, which makes travelling more fun.”

Bee adds: “Her personality is infectious and she’s a pleasure to be around. We can’t imagine travelling without her.

“If we get back to the van after a hike without her she greets us at the door. And every morning we wake up with her snoozing on our pillows. She’s part of the family and we wouldn’t have it any other way.”

Theo and Bee, who have been together since they were 16, were saving for a deposit for a house when they decided a conventional lifestyle in the UK wasn’t for them. Theo used to run his own film production company, while Bee did a degree in animal conservation science and worked at a vet’s.

Now they make YouTube videos documenting their travels. Their channel, The Indie Projects, has more than 200,000 subscribers and they live off the earnings their videos make.

Bee said: “When we first headed off, we did a whirlwind trip of Europe. We visited France, Belgium, all the way through Germany, the Netherlands and up to the Arctic Circle.

READ  Unlock the happiness in your home: We talk to three home improvement rising stars about how to make your pad a feel-good place

“We pretty much covered all of Europe and did 80,000 miles in the van. The last trip we spent six months up in the Arctic Circle, we went via Finland, into Sweden and then spent a huge amount of time in Norway.”

In between their travels, they live off grid on land they bought in Portugal – where they are currently chilling out.

Theo said: “We have solar panels and a generator, we harvest our own water from the rain and collect it from two wells. We have composting toilets.

“Basically, life is a little bit harder, you can’t just flick a switch and have electricity or turn on a tap for water. You really have to plan ahead.”

Theo and Bee say travelling with a cat is easier than people think.

Bee said: “She has a passport, current rabies jab, current vaccinations and a microchip. That’s it. At ferry check-in a quick scan of her body finds the chip and checks the number against her passport. It’s simple.”

Their great adventure prepared the couple for a new challenge – BBC2 show Win the Wilderness: Alaska.

While Ginjey was cared for by relatives, they competed to win a home in the wilds of Alaska in a reality show dubbed “The Apprentice meets Bear Grylls”.

The home up for grabs belongs to Duane Ose and his wife Rena, who claimed five acres of land under the US Homestead Act.

They built a three-storey home from 7,000 spruce trees, 100 miles from the nearest road. They even built a runway, so the property can be reached by plane.

Now in their 70s, the pair are seeking a couple to take over their home of 35 years – and Bee and Theo are one of six intrepid British couples hoping to win it.

They take part in outdoor tasks – such as building shelters – and lived in a survival camp surrounded by bears while the series was filmed.

Theo said: “We adore Alaska. We spend a lot of time in Scandinavia and it’s really similar.

“We felt at home there as soon as we arrived. Duane and Rena are a fascinating couple.

“They’ve definitely got a lot of grit and determination.

“I think the best way to grow as a person is to push yourself out of your comfort zone.

“It was such a good challenge. The hardest part was being around other people all the time, because we’re so used to being alone with our cat for company. It was fantastic being reunited with her.”