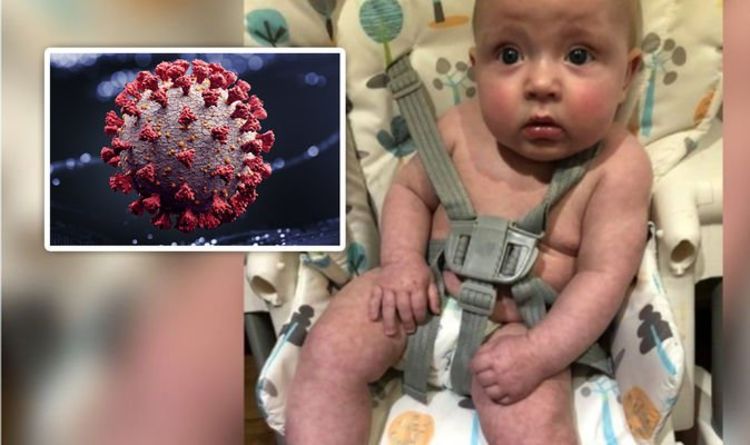 Baby George tested positive for COVID-19 at Basildon hospital, in Essex. Spending three nights in the ward, mum Myer “burst into tears” when she saw how the virus took hold of her little boy.

On New Year’s Eve, Myer noticed her son had a temperature, but had put it down to teething.

Advised to take George to hospital, Myer was weary. “I really did not want to go,” she told the BBC.

“I was so scared about him getting the virus there, I had no idea he had it.

“He got so poorly, so quickly, when we arrived and was really lethargic. They took a swab… when they said he was positive, I burst into tears.”

In total “shock”, the mum-of-two watched as her baby’s skin became mottled and his lips became swollen.

Asked by nurses to raise awareness of coronavirus symptoms in babies, Myer posted information on Facebook.

“This is real and it does affect the old and the young. I feel exhausted and just want my George better and smiling again!

“The nurses have asked me to post this to make people aware the symptoms are not just a cough and high temperature.

“George has not stopped vomiting since yesterday, [he] can not keep fluids down.

“His temp is, on average, 39.4 and his skin is mottled; he also had swelling on his lips.”

The mum finished off: “Please stay safe and do the right thing! Thank you NHS. Thank you Basildon hospital.”

A few days later in the hospital, baby George did develop a mild cough, but he has now been discharged and has made a good recovery since.

Dr Kilali Ominu-Evbota, paediatric consultant at Mid and South Essex NHS Foundation Trust, said: “It’s great to hear that George is now back home and on the road to recovery.

“George’s family did the right thing and we encourage parents to seek medical advice with their GP or via the NHS 111 service in order to get the correct treatment for their child.”

Myer said the staff at Basildon, Essex, hospital were “amazing” in helping her baby fight the virus.

She also wanted to reassure parents “not to be afraid to go to hospital” if they’re advised to do so by NHS 111.

Essex has some of the highest COVID-19 rates in England, reported the BBC.

The county’s director of public health Dr Mike Gogarty warned about “one in 18 people have COVID-19” in Basildon, where Myer and her family reside.