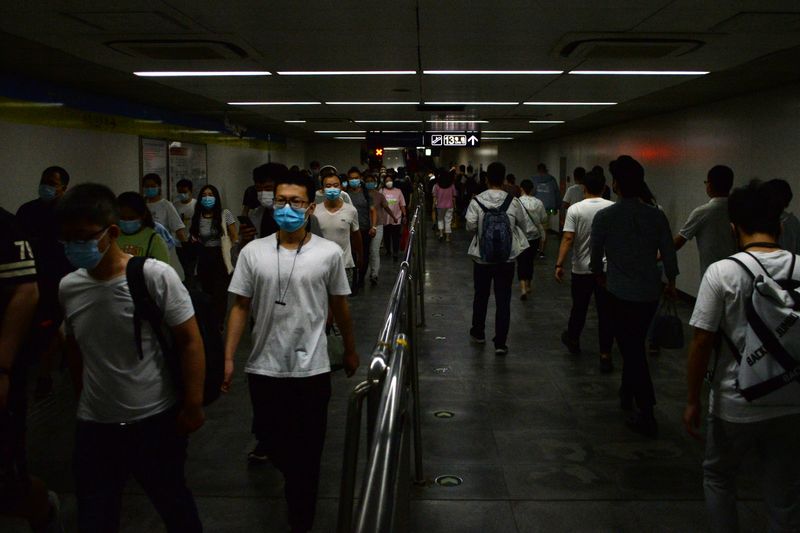 © Reuters. People wearing face masks walk inside a subway station, following the an outbreak of the novel coronavirus disease (COVID-19), in Beijing

BEIJING (Reuters) – Beijing reported its second consecutive day of record new numbers of COVID-19 cases on Monday, adding urgency to efforts to rein in a sudden resurgence of the coronavirus in the Chinese capital.

The recent outbreak has been traced to a major wholesale food market, Xinfadi, which accounts for 80% of Beijing’s farm produce supply sourced both domestically and from overseas.

The market has been shut, tens of thousands of nearby residents are being tested for the virus and a city-wide campaign launched to identify people who have recently visited the market or have been in contact with people who have.

Beijing officials on Monday confirmed 36 new COVID-19 cases for June 14, the same as a day earlier, which was the city’s highest daily infection count since late March. Officials have now reported 79 cases over just four days, the biggest concentration of infections since February.

A number of neighbourhoods in the west and southwest of Beijing have been upgraded to medium-risk, including Financial Street where banks and financial firms converge, which calls for measures such as strict control of people and vehicle movements, disinfections and temperature checks. One neighbourhood in the same district as the food market was raised to high-risk, denoting the most severe level of infection.

As three other provinces reported new cases linked to the Beijing cluster, several provinces warned their residents against non-essential travel to the capital and implemented isolation protocols for travellers from riskier parts of Beijing.

The World Health Organization said on Sunday it was informed of the outbreak by Chinese officials who were investigating its source and extent. WHO called for thorough investigations to better understand the source of the cluster.

The Xinfadi market spans an area the size of near 160 soccer pitches. Thousands of tonnes of vegetables, fruits and meats are traded at Asia’s largest wholesale food centre.