Doctors have been using a robot to treat the first person known to have been admitted to hospital in the US with a new strain of the coronavirus, as part of an effort to prevent the spread of the disease, which has killed at least 17 people in China and infected hundreds more.

The man in his thirties was admitted to the special pathogen unit in a hospital in Everett, Washington, on Monday. The US citizen had recently returned from a trip to central China and had been diagnosed in Seattle.

Dr George Diaz, chief of the infectious disease section for Providence regional medical center, told the Guardian the patient was in a “satisfactory condition” on Wednesday. He did not give an update on how long the patient would remain in the unit.

Diaz said he had sat outside a window of the patient’s 20ft-by-20ft room to operate the robot, which was equipped with a camera, microphone and stethoscope. It is one of many ways the hospital has worked to reduce risk of the virus spreading.

Diaz said the patient was picked up from his home and taken to the hospital by ambulance. He was brought to the isolation unit in an Isopod, which is a closed gurney, and then allowed to move around inside his room once it was secured.

The virus is thought to have originated around Wuhan, in Hubei province, where more than 540 people have been hospitalized. The World Health Organization (WHO) has been considering declaring the growing viral pneumonia outbreak in China to be a public health emergency of international concern.

READ  Dinosaurs were thriving before the deadly asteroid strike

Symptoms of fever, cough and difficulty breathing have also been reported in Thailand, Japan and South Korea. Most of those confirmed to have died of the illness had previous medical conditions and were 60 or older, and all were located in China.

CDC officials have said the risk to the American public is low.

This is the first time the Providence regional medical center in Everett has admitted a patient into its special pathogen unit, according to Diaz. The hospital and its staff have been preparing for the possibility since 2015, when the hospital created the unit in response to the Ebola outbreak in West Africa.

“Every few weeks [we’re] doing drills and training like you would for an earthquake or fire drill or something like that, and so you’re always trying to maintain a state of readiness,” he said. “The wheels were greased enough that it wasn’t hard to get the process rolling to activate all the procedures that we had put in place.”

The hospital has two rooms in the unit, but it’s working on plans to prepare at least 10 additional rooms, should there be a need.

The hospital is part of a large health system made up of dozens of hospitals and hundreds of clinics and urgent care centers in seven states. Since admitting the patient in Washington state, all of these facilities have activated a screening tool for the virus.

There is only one entry point for the special pathogen unit, which is guarded by security officers, said Diaz. Visitors wear a special type of helmet called a CAPR, as well full body protection.

Washington’s governor, Jay Inslee, said in a statement on Tuesday that health departments at the local and state levels were prepared for this type of situation, and should there be other cases in the US, the state “will continue to work to share information and help however we can”. 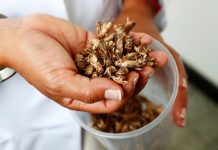 Waiter, there's a fly in my waffle: Belgian researchers try out insect butter

'It's no worse than the flu': busting the coronavirus myths