A plane carrying Britons who had been trapped on a coronavirus-hit cruise ship in Japan is on its way to the UK, the Foreign Office has said.

Some 78 Britons were on the Diamond Princess cruise liner when it was quarantined in Yokohama 16 days ago.

The Foreign Office said 32 British and European passengers were on board an evacuation flight, along with medical staff and British government officials.

The plane is due to land in the UK on Saturday morning.

It took off from Tokyo’s Haneda Airport late on Friday evening (GMT).

The flight had previously been delayed after the British embassy said it was “logistically complicated”.

The passengers are expected to land at Boscombe Down, a Ministry of Defence base in Wiltshire, before spending 14 days in quarantine at Arrowe Park Hospital in Wirral – where two groups of people travelling from China have previously stayed.

Some have already been evacuated over the last week on flights to Hong Kong, organised by the authorities there, a government source has told the BBC.

Others are being treated for the virus in health facilities in Japan.

David and Sally Abel, a couple from Northamptonshire who were diagnosed with coronavirus on the cruise ship, have since been told they have pneumonia, their son said.

Steve Abel said in a YouTube video late on Friday evening that his father’s condition was “very serious”, while his mother has a more mild form of pneumonia.

At least four UK nationals have contracted the virus on board the cruise ship, but those flying home have tested negative.

More than 620 people on board the cruise ship tested positive for the virus – the largest cluster of cases outside China.

It is understood that some British nationals are members of the ship’s crew who could be staying on board the ship.

Two Japanese passengers – both in their 80s and with underlying health conditions – were confirmed to have died after contracting the virus on the Diamond Princess.

The cruise liner was carrying 3,700 people when it was quarantined in Yokohama on 5 February, after a man who disembarked in Hong Kong was found to have the virus.

China has reported 75,567 cases including 2,239 deaths from Covid-19, the illness brought on by coronavirus.

In the UK, a total of 5,885 people have been tested for the virus, as of 14:00 GMT on Friday. Nine people have tested positive.

How to sleep: Eat this fish three times a week to get a good night's sleep

Coronavirus: Face masks DO NOT prevent infection, WHO says

I’ve been exposed to someone with coronavirus – can I be tested? Dr Hilary answers your coronavirus questions 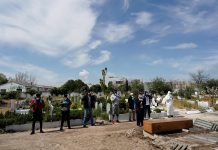 Spain's coronavirus deaths pass 14,500, but real toll may be bigger

UK's coronavirus death toll: how accurate is it and how does it compare?