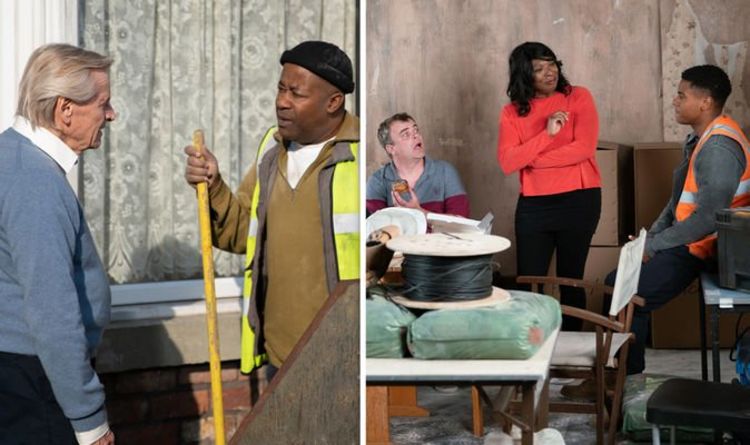 ITV soap Coronation Street will be welcoming a brand new family to the Cobbles very soon. The Baileys are going to be bringing more drama to Weatherfield soon when they move into Norris Cole’s (played by Malcolm Hebden) old house at Number three. On top of that, the house will be getting a massive revamp.

When is the new family coming to Coronation Street?

Corrie fans will see the Baileys really stirring things up when they arrive in Weatherfield.

According to soap spoilers from ITV, the family will rile up Coronation Street stalwart Ken Barlow (William Roache).

The Baileys will be moving into number three and kick off the renovation works quickly while Ken and an upset-looking Mary Taylor (Patti Clare) can only look on.

Ken initially mistakes father Ed for one of the builders after seeing him emptying things into a skip.

Ed mischievously decides to play along and tells Ken the new family has 10 children and lots of animals.

He also informs other customers in the Rovers Return about the supposedly crazy new family.

Unsurprisingly, Ken is left irate and threatens to complain about the new residents after the noise of the building work gets too much for him.

Ed plays a prank on Ken by giving him wife Aggie’s contact details, so the Coronation Street favourite will get in touch with her.

How will Ken react when he finds out the truth and realise he’s been duped?

Meanwhile, Michael is in the mood for love as he sets his sights on Michelle Connor (Kym Marsh) which could problems with Robert Preston (Tristan Gemmill).

But after the initial discord, the Baileys will ingratiate themselves with the rest of the street and make friends with the other Weatherfield residents.

Nevertheless, the feud between the Baileys and Ken looks set to continue after he finds a hole in his living room wall.

The Baileys were announced as a family back in April this year and become the first Afro-Caribbean family in the ITV soap.

Coronation Street boss Iain Macleod said at the time: “Manchester has a large proportion of black residents. It did feel sort of overdue that we did this and represented modern Manchester a bit more accurately. As to why it’s taken till now, I don’t know.

“The north west and Great Britain as a whole is a big melting pot of people from different backgrounds and ethnicities and the more representative we can make Corrie of Manchester and Britain, the better really, so it was a no-brainer.

“But, as with anything on Coronation Street, it was the characters that came first and they were just instantly likeable.”

He continued: “I could picture them all in my head from the moment the writer described them.

“It was led by character but it felt like the right time to introduce this family.”

READ  Jessie J sends Channing Tatum wild in bondage outfit including see through top and fishnets as she covers her face in tape
Share on FacebookShare on TwitterShare on PinterestShare on Reddit
newsgrooveJune 5, 2019